The China Model: What the Country’s Tech Crackdown Is Really About

By Austin Carr and Coco Liu

On the fourth floor of a harborside mall on Grand Cayman, not far from touristy scuba-diving outlets and a jerk-chicken shack, is the offshored home of ride-hailing company DiDi Global Inc., one of China’s biggest technology firms. A few doors down are the internet companies Baidu Inc. and Meituan; Alibaba Group Holding Ltd. is registered at a P.O. box up the street, right across from Singh’s Roti Shop & Bar.

The Caribbean footholds, essentially leased mailing addresses, have no operational value but have made it easier for Chinese unicorns to attract European and American investors. They’ve been a bridge between East and West, a sunny symbol of the freewheeling capitalism tolerated by the Chinese Communist Party (CCP) as the cost of allowing its homegrown juggernauts to compete with their U.S. counterparts. DiDi’s presence there was needed for it to go public on the New York Stock Exchange on June 30. Chinese companies saw multiple benefits to gaining access to the U.S. When DiDi opened a research campus in California in 2017, founder and Chief Executive Officer Cheng Wei gushed about the company’s “new home ... alongside the greatest technology companies in the world.” Together, they were embarking on a “great journey.”

But this journey started veering off course in October when Alibaba co-founder Jack Ma, one of the country’s most visible billionaires, blasted Chinese regulators for stifling innovation. President Xi Jinping’s government responded by squashing Ma’s plan to take Alibaba’s fintech offshoot, Ant Group Co., public and initiating an antitrust case against Alibaba. Ma disappeared from public view, his fortune dwindled, and murmurs began about a broader realignment in the relationship between China’s government and its biggest companies.

DiDi’s turn came on July 2, just days after its $4.4 billion initial public offering in the U.S. Regulators ordered a security review, then demanded mobile stores remove DiDi’s apps. “Just because you are a highly successful tech company does not mean you are above the CCP,” says Michael Witt, a senior affiliate professor of strategy and international business at Insead in Singapore. “Ant Group and Jack Ma found that out for themselves last year, and it is surprising DiDi did not get the message.”

Later in the month, the Chinese government announced a sweeping new regulatory framework for the online education industry, which it said had been “hijacked by capital,” then said online food platforms must ensure workers make at least the local minimum income. This gutted share prices of delivery giant Meituan, which was already facing an investigation into alleged monopolistic behavior. In separate statements in recent months, Alibaba, Didi, and Meituan have said they’d cooperate with authorities and work to enhance their compliance systems.

The government’s clampdown signals a new era of harsher oversight that companies won’t be able to avoid by registering in the Caymans or hiring in California. The world’s two largest economies seem headed down different paths as they grapple with the sprawling power that private tech companies have amassed. The authoritarian tinge is a risky pivot to some in and around the Chinese tech industry—and others see a chance for the country to gain an edge against its main geopolitical rival. “China is actually taking the lead in setting some boundaries around the power of Big Tech,” says Thomas Tsao, co-founder of Gobi Partners, a venture capital firm based in Shanghai. “People are missing the bigger picture. They’re trying a new model.”

Since the late 1990s, China has emulated Silicon Valley’s approach to innovation. Aided by Western capital and a generation of Elon Musk-like entrepreneurs—many educated overseas—the country saw Chinese versions of EBay and Amazon (Alibaba), AOL and Facebook (Tencent), and Google (Baidu) rocket to success while the government took a permissive approach to their behavior and largely protected them from U.S. competitors. At first, Chinese companies replicated services that were unavailable in or not tailored to the country, but they’ve long ceased to be mere copycats of Valley rivals and now frequently outmaneuver the global competition. So-called super apps, including Tencent Holdings Ltd.’s WeChat and Alibaba’s Alipay, also created by Ma and team, handle everything from on-demand transportation to food delivery to paying utility bills—there’s nothing comparable in the U.S. These days, Apple, Facebook, and Snapchat are racing to mimic features of these and other Chinese apps, instead of the other way around.

Just as in the U.S., unfettered growth led to increasingly powerful tech companies and CEOs who, operating with surprising independence, weren’t afraid to flex their power. China’s biggest tech companies periodically forced smaller competitors to integrate with their platforms or pressured them to sell out. Ma and other titans became cultural rock stars. He even started dressing like a rock star at raucous Alibaba events, complete with a mohawk wig and leather jacket and guitar, and became vocal about societal issues.

Some see the crackdown on Alibaba and DiDi—along with actions against dozens of other tech companies—as long overdue. Andy Tian, who led Google China’s mobile strategy in the 2000s and is now CEO at Beijing social media startup Asian Innovations Group, says it will be “positive for innovation” and “competition in China will be fiercer than in the U.S.,” because smaller companies will benefit from policies that rein in the largest competitors.

Angela Zhang, director of Hong Kong University’s Centre for Chinese Law and the author of Chinese Antitrust Exceptionalism, says the intervention will reshape the tech industry in China faster than it could happen elsewhere. “The case against Alibaba took the Chinese antitrust authority only four months to complete, whereas it will take years for U.S. and EU regulators to go after tech firms such as Facebook, Google, and Amazon, who are ready to fight tooth and nail,” she says.

Lillian Li, founder of the newsletter Chinese Characteristics, deems the disruption “a rebalancing of the dynamics, redrawing the boundaries. I don’t think the Chinese government is out there to destroy tech giants.” After decades of an anything-goes ethos, she says, China wanted to remind its tech industry “what they can do and can’t do.”

If China is abandoning the Silicon Valley model, what will it replace it with? Insiders suggest it will be less founder-driven and more China-centric. U.S. antitrust action often focuses on strengthening consumer protections, but China’s crackdown is ultimately geared toward protecting government policy. Alicia García-Herrero, a top economist in Hong Kong at investment bank Natixis, notes that neither Huawei nor ZTE, which together have a lock on the Chinese telecom networking market, have been targeted so far, likely because they maintain closer ties to government officials. “Full alignment with China’s leadership is a must to operate in China,” she says.

President Xi’s government has outlined sectors it wants to prioritize, including semiconductors and artificial intelligence. Xi has called the data its tech industry collects “an essential and strategic resource” and has been pushing to tap into it for years. Following a 2015 mandate, cities from Guiyang to Shanghai have set up data exchanges that facilitate the transfer of anonymized information between corporations. This could lead to a nationalized data-sharing system that serves as a kind of digital public infrastructure, putting a massive trove of data into the central government’s hands.

The danger with this approach is that it could have a chilling effect on innovation. As one Chinese unicorn founder puts it, this new China tech model would “help hold back some overcreative ideas.” Although this was meant as approval, it also can be read as a scarily restrictive view of innovation. The war for control over data could also threaten the Cayman Islands’ status as a bridge between the superpowers. William Kirby, a Harvard professor who specializes in Chinese business studies, notes that Washington has passed legislation that threatens to delist the stocks of Chinese companies that don’t submit documentation for audits, potentially exposing the data China wants to keep for itself. China has already signaled it will make it harder for Chinese companies to list on U.S. stock markets, limiting their ability to grow and raise capital outside Asia. “All this is a lose-lose proposition,” Kirby says.

If the crackdown makes it more difficult for China’s largest companies to expand, the beneficiaries could be American tech giants. The prospects for regulation in the U.S. remain uncertain, and Silicon Valley’s dominant players could keep buying up future rivals, winning at a global scale. Of course, if they do so by smothering startups that could develop into rivals, it could end up depriving the U.S. of useful innovations just because Google or Facebook Inc. find them threatening.

The cost of China’s turn on tech is also being borne by its future business leaders, who, after years of looking up to the founders of DiDi and Alibaba, now have to figure out how to think differently. One China-based startup founder, who requested anonymity to speak openly about a politically fraught subject, says tech companies will likely be more cautious in rolling out riskier products, act with more reverence for CCP policy, and may try to avoid growing too huge, lest they draw unwanted government attention.

Yet another entrepreneur who’s operated for years in China scoffs at this notion. “No one is going to say, ‘Oh, maybe I shouldn’t get too big, because then I run the risk of being shut down by the government,’ ” says this person, who also requested anonymity. “If I get to that point, where I’m so big that I’m getting shut down by the government, that’s amazing. That means I won. That means I’m the next Jack Ma.” —With Peter Elstrom, Selina Xu, and Zheping Huang Read more: China Doesn’t Care How Much Money You Lose 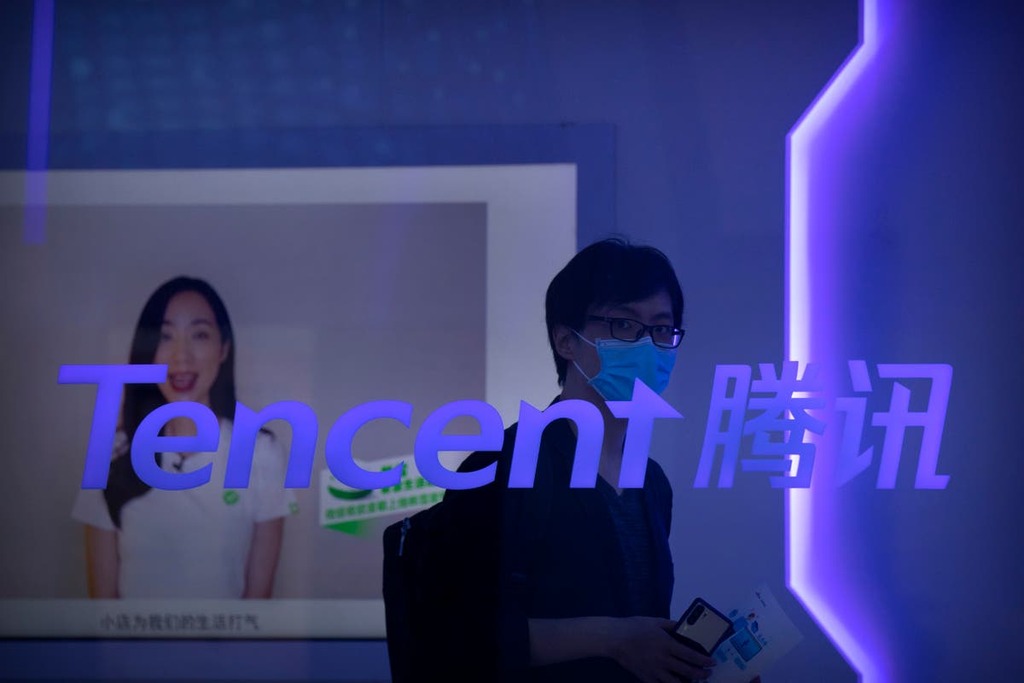 The Independent UK
One subscription that gives you access to news from hundreds of sites
China Triggers $1 Trillion Market Meltdown, And It’s Just Getting Started

The more China takes out the billionaire founders innovating and creating new good-paying jobs, the harder it might be for…