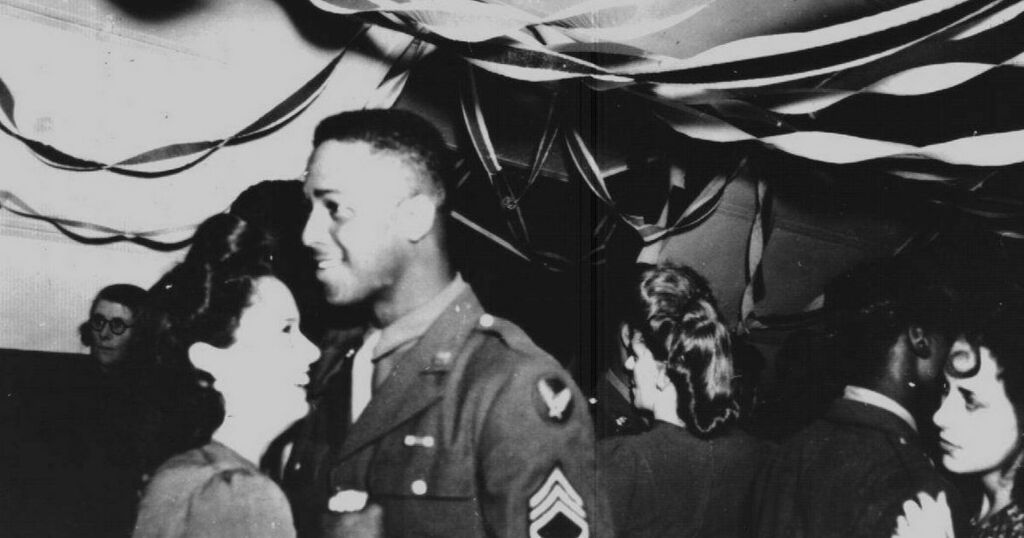 During World War II, around one million American troops arrived in England to prepare for the invasion of Europe and to assist Great Britain in the fight against Nazi Germany.

For many Brits, this was their first time meeting a person of colour, but in Bristol, the public were incredibly welcoming to their American visitors, with some pubs such as The Colston Arms refusing to adhere to US segregation practices.

America’s stringent Jim Crow laws were not limited to the United States alone, as the army was officially segregated until 1948.

Black service personnel, of which 75 percent were from the southern states, were also subjugated while serving abroad as they were forbidden from bearing arms and resigned to second class roles such as constructing air bases, cleaning, driving and cooking.

But despite the oppressive racial divides within their own force, Black GIs were widely embraced by British citizens.

Professor of social and cultural history at Anglia Ruskin University, Lucy Bland said: “From all accounts a lot of local people much preferred the Black GIs.

“They were more polite and less pompous while white American GIs complained that Brits didn’t have refrigerators, cars or radios and thought it was a pathetic country.”

White British women were among those who welcomed Black Americans, which was of particular concern to the UK government who feared these inter-racial relationships would inevitably lead to ‘half-caste babies’.

British authorities tried to implement segregation at dance halls, cinemas and pubs but to the dismay of white American GIs, these became meeting spots for Black Americans and British women which later resulted in the birth of around 2,000 mixed race babies in Britain.

Following victory in Europe, American servicemen returned home, unable to continue relationships with their British sweethearts, not least because 30 of the 50 US states had anti-miscegenation laws forbidding interracial relations.

Professor Bland documented the experience of 60 of these children in her 2019 publication Britain’s ‘Brown Babies’: the stories of children born to black GIs and white women in the Second World War.

Professor Bland revealed these accounts were only the “tip of the iceberg” of the many relationships formed in Bristol and in other parts of the country during this period.

The children, who came to be known by the British press as the nation’s “Brown Babies”, grew up in post-war Britain in the South West, East Anglia, Lancashire and South Wales, and had varying experiences of life in predominantly white societies.

As part of Black History Month, Bristol Live spoke with three of the children profiled in Professor Bland’s book.

Dave Greene, Deborah Prior and Ann Evans were all born in South West England and Wales in the 1940s to British women and Black American fathers who they had never met growing up.

When Dave, Deborah, Ann and the other 2,000 mixed-race children were born, the British government feared they would create a “difficult social problem”, according to Home Secretary Herbert Morrison, and encouraged many mothers to send their babies to the children’s home, Holnicote House, in Somerset.

Professor Bland explained: “Somerset County Council requisitioned this beautiful house originally for children who were evacuated during the war, but increasingly they got more children on their books from married women having mixed race children who they weren’t able to keep.

“Some of these babies arrived just a week old”, she added.

Holnicote House was staffed by young nurses who were very loving towards the children, and according to Professor Bland, many of those who she interviewed recalled having happy childhoods there.

But it was when the children got older and started attending school in predominately white communities that they began to experience racial discrimination.

“Not only did the children have the stigma of illegitimacy, but they had the issue of being mixed-race with very few role models”, Professor Bland said.

“They were sometimes name-called but didn’t understand what it meant because they often didn’t know anything about their background.”

While undertaking her research, Professor Bland spoke with a number of individuals who struggled to find their fathers due to the lack of cooperation from the American military in the decades following the war.

Some were successful in eventually connecting with their fathers or extended family in America, if only much later in their lives.

Of all the 2,000 mixed-race children born, only Leon Lomax was adopted and raised by his biological father in America before the UK government stopped adoption requests, not wanting to appear to owe the US any more following WWII.

Brown Babies presents deeply emotive narratives which expose how many children experienced the trauma of foster and children’s homes and the pain of racial prejudice and discrimination following the war.

But the publication also portrays the children’s immense resilience and strength along with countless instances of kindness and acceptance that they experienced throughout their lives.

Professor Bland said: “The exhibition draws upon the stories portrayed in my book Britain’s ‘Brown Babies’ including the arrival of the Black GIs to Britain, their meeting with local woman, children being kept by mothers and grandmothers, children being given up to children's homes, adoption and fostering, the search for mothers and fathers, adulthood.

“The new (8th) banner that I have recently added gives more stories, as people have been contacting me ever since the book was published.

“The 8th banner also gives the link for the online exhibition which is a greatly expanded version of the book and of the physical exhibition.”

The ‘Brown Babies’ digital exhibition, Mixed Museum, gives a powerful insight into Professor Bland’s research where visitors can share their reflections and any personal history of their own in the exhibition’s community archive.

To read the full collection of stories from Britain’s ‘Brown Babies’: The Stories of Children born to Black GIs and White Women in the Second World War by Lucy Bland, you can purchase the book online or at your favourite book store.

Features on Dave Green, Deborah Prior and Ann Evans will be published on Bristol Live throughout Black History Month.