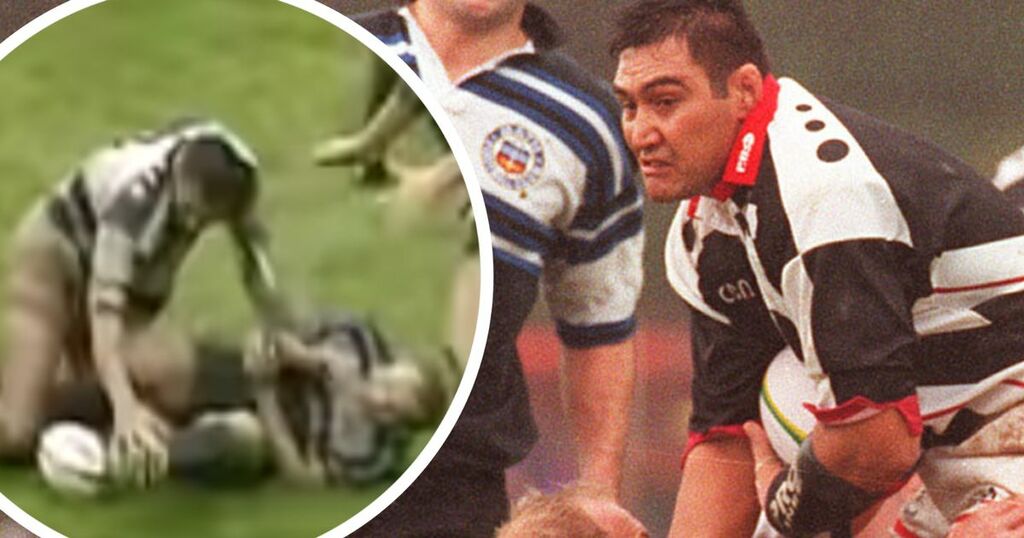 There have been no shortage of famous tackles in Welsh rugby down the decades.

You had the slightly-built Barry John putting his body - and nose - on the line to stop giant French lock Benoit Dauga reaching the try-line during the Grand Slam decider in Paris in 1971.

Then, in 1976, there was another Slam-sealing intervention against France as JPR Williams barged winger Jean-Francois Gourdon into touch near the corner flag, following it up with a pumped-fist salute.

In more modern times, there was Gavin Henson turning England youngster Mathew Tait into a handbag accessory in 2005 and then there was the off-the-shoulder look adopted by George North as he dealt with Wallaby star man Israel Folau during the Lions’ series triumph Down Under in 2013.

You also had Leigh Halfpenny illustrating his immense bravery by denying England wing David Strettle at Twickenham in 2012. It left Halfpenny seeing stars, but it clinched the Triple Crown for Wales - as he eventually learned when he came round.

Yet when it comes to club rugby, there’s perhaps one tackle that still resonates like no other.

That was Dale “The Chief” McIntosh’s immense hit on Andy Robinson during Pontypridd’s memorable 19-6 Heineken Cup victory over Bath 25 years ago this weekend, in October 1996.

It was the day that Ponty, and McIntosh in particular, really announced themselves on the European stage.

But at a rain-soaked and packed-out Sardis Road, they were brought down to sodden earth with a bang by the Valley Commandos, as scrum-half Paul John went over for the only try of the game and Neil Jenkins did the rest with his trusted boot.

Yet what people will remember above all is No 8 McIntosh’s bone-shaking piledriver on openside Robinson during the second-half.

Taking the ball up near the opposition 22, the Bath captain found himself on the receiving end of a huge tackle from “The Chief” which has gone down in rugby folklore.

You could feel the impact up in the press box and hear the collective intake of breath around the ground.

Robinson was left in a heap on the deck and it’s a moment that remains engrained in his mind.

“I can still remember how it happened,” said the former England flanker.

“I was calling for Mike Catt to miss me out and pass in front of me, but he didn’t and the rest is history.

“I felt the full impact. It hurt!

“I dropped the ball so it got turned over and Pontypridd went on a counter attack and ran the length of the field, ending up with a lineout in our corner.

“I remember being down on my knees, winded and thinking ‘You can’t go off, you’ve got to get back up there’.

“As I’m running back, all I’ve got in my head is ‘Chief, Chief, Chief’ from the Ponty supporters.

“But I did carry on, albeit slowly!”

So 25 years on, do Welsh people still remind him of that incident?

“Constantly!” replies the man who went on to coach England, Scotland and the Lions.

“When I was working with Sean Holley at Bristol, whenever we did analysis of big tackles, he would always produce that clip.”

I covered the 1996 match at Sardis Road for the South Wales Echo and I can still recall being in the players' lounge above the dressing room after the match.

That’s where the press traditionally went to do their interviews and I vividly remember a gaggle of Fleet Street’s finest gathered around the New Zealand-born McIntosh, who had been chosen as Man of the Match.

In particular, they wanted to know where his nickname - which the home faithful had been chanting so loudly - came from.

Was it because he was part of some kind of Maori chiefdom, they enquired?

No, replied the big man, it was because he resembled Chief Bromden from the Jack Nicholson film One Flew Over The Cuckoo’s Nest, a moniker he first acquired at Ynysybwl RFC.

Either way, the nationals had their line.

So, what of McIntosh’s memories of the match?

Well, understandably, he looks back on it with great fondness.

“The Bath game was huge for us because we were an unknown identity then,” says the Ponty legend

“We were written off beforehand as Bath had such a tremendous side.

“All the talk was about Jason Robinson and Henry Paul signing from rugby league.

“We were supposed to have 40 points put on us, but it didn’t quite work out that way.

“We already had a reputation in Wales, but that game with Bath got us noticed to a wider audience because the European Cup was a new concept.”

And, finally, what about the tackle?

If that’s the case, you certainly wouldn’t have wanted to be around when he delivered his best shot!

For the latest breaking news, interviews and headlines in Wales, you can sign up to our newsletters to get the biggest stories delivered straight to your inbox.