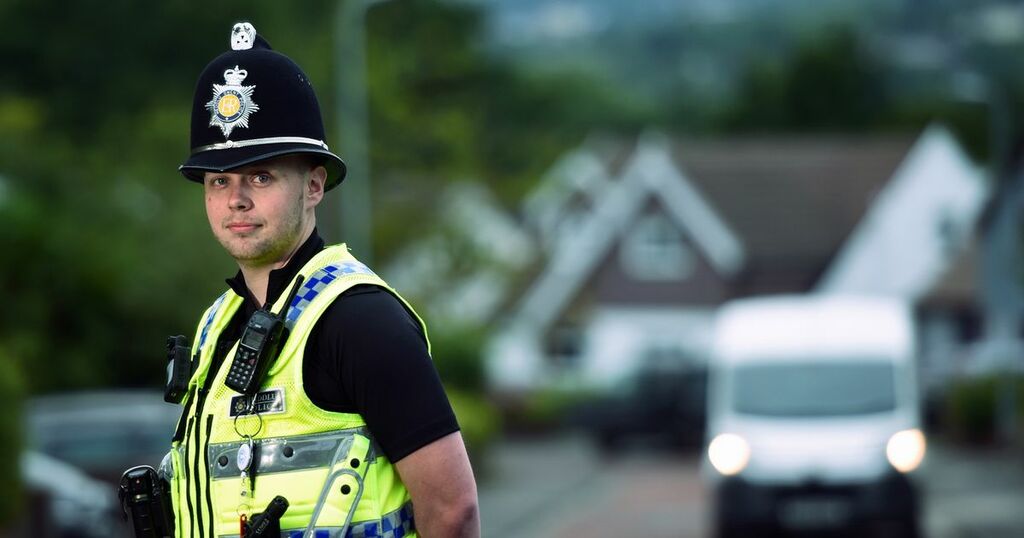 When Ieuan Griffiths pulled over a delivery driver last month he knew exactly what to do – because he is one.

The Argos driver from Caerphilly borough is out on the beat most weeks with Gwent Police but you wouldn’t tell the difference between him and a regular officer.

The 22-year-old special constable is proudly one of the 75 volunteers in the force to serve a combined total of more than 21,000 hours of their time since January.

Read more: Hero police officer gets tearful bride to her wedding after she broke down on a busy dual carriageway

At 6ft 8ins tall and wearing the same uniform as an officer – and having the same powers – you’d be forgiven for mistaking him for a top sergeant. And while the gentle giant might not be top of the food chain in the force he is worth his weight in gold.

“Ever since I was small I’ve looked at the police and it’s something I’ve been really interested in – I feel I’m naturally inclined to try and help people,” he said, sharing his story as we walk through the quiet streets of Cwmbran near the Gwent Police headquarters.

“I think there are certain things that go on in the world that most people have no idea about. I want to know about them and be involved. I don’t want to spend all my evenings watching TV or going to the cinema. I’d rather go out and make a difference.”

Making a difference would be an understatement for what specials like Ieuan do every day on the streets of Wales.

At a time where police numbers are stretched and the ‘pingdemic’ has taken its toll on the force, like other industries, special constables have stepped forward.

Aged from 18 upwards they support officers in a variety of day-to-day police work including foot patrols to tackle anti-social behaviour and drug dealing.

The 75 specials for Gwent Police have day jobs in multiple industries like IT, food production, teaching, and hospitality.

Some are students, some are full-time carers, and some are even retired. Ieuan finds his life outside of the force allows him to understand people more thoroughly.

“Because we’ve got day jobs we may see things in a slightly different light,” he explained. “That I think probably helps us deal with things in a different way to how a regular officer might do. I try to get a connection with the person I’m talking to.

“I dealt with a deliver driver recently and because I did that job I managed to get a rapport with him and calm him down. That situation was resolved by speaking, which is the aim. I hope I struck him with the knowledge I had of his job.”

Now he has completed his first segment of a nine-month training course to become a fully-equipped special Ieuan spends some of his voluntary time patrolling the streets of Newport in the evenings.

“I’ve done a lot of City Safe project work looking out for the night-time economy,” he said. “We’re an extra pair of hands for the regular officers and we’re an increased presence to help public confidence.

“I think it’s important. You hear a lot of people complaining about a lack of a police presence on the streets. Every time we turn up to a shift I know we’ll be welcomed with open arms by the full-time officers.”

It’s difficult to comprehend that someone like Ieuan, passionate about helping Gwent’s communities, receives regular abuse while volunteering with the police but it doesn’t surprise him.

“It’s challenging. You’ve got to have tough skin and let things go over your head. I find on the whole if I treat people with respect I’ll get that back but not always.

“There’ll always be people out there who don’t respect you if you’re involved with the police. I came into it with that knowledge. But generally I find people are very accepting and welcoming.”

But why, when you could volunteer at the local rotary club, would you risk heading out to police Newport city centre on a Saturday night for free?

Jason Venables, who has balanced his day job selling power systems to festivals with volunteering as a special since 2017, has a simple answer.

“It’s probably the thrill of it,” the 27-year-old from Blackwood said. “I heard stories of police being stretched and I just wanted to help.

“You get to go out on some really interesting calls. It can go from dealing with Newport city centre at night-time to attending a child kicking a ball against a wall. It’s so varied.

“I really enjoy my day job but it’s nice to be able to step back from that and do something completely different.”

What do specials and officers in your area deal with? Use this tool to check crime reports where you live:

As an experienced special Jason is now a special sergeant and his voluntary work has taken on an even more important role in his life since the pandemic started after Covid hit music festivals and his work particularly hard.

“The pandemic has had a huge impact on the force in terms of staff members being off with Covid and we’ve had to step up.

“Most of our staff at the business were furloughed last year. I was furloughed and it meant I was doing a lot more of the policing stuff.

“It’s definitely helped me mentally. It’s kept me busy. I’m not the sort of person to sit at home and do nothing.”

Like Ieuan he took lessons from his day job and feels it has helped him to understand people.

“Every officer deals with things in a different way and that’s important,” he said. “I think there is a perception that every police person is the same but that isn’t the case.

“The majority of my skills are in customer service and customer-facing roles. I find talking to people on a level rather than going in all guns blazing works well for me. I’m not necessarily one for conflict.

“Confidence and people skills I’ve gained from sales has been brilliant for policing. I think that’s the most valuable thing for a special. It’s mostly about being able to talk to someone and help them.”

That confidence is something that has grown in Jason in his time with the force. He remembers vividly how daunting his first shift with the police was.

“I stepped into the station for the first time and I was a nervous wreck,” he laughed. “Not knowing even how to approach the sergeant to tell them I’m here to work with the team.

“For the first couple of months it all felt almost a bit unreal. You’re dressed in your uniform, you look the same, you act the same, and you’re trying to hide those nerves from the public a bit.”

Kraig Jackson, a 24-year-old NHS worker who is often deployed in Cwmbran and Newport, says he still hasn’t quite got used to being in the uniform.

“I quite often find myself walking around and wondering why people are looking at me but they’re looking at the uniform,” he said.

“I think that’s a good thing. I think the role of a special is mostly to help and reassure – and you don’t always have to be solving crimes to do that. Just being there, being visible on the ground, is helping and reassuring and protecting.”

Kraig, who started as a special this year, said curiosity and a passion to help led him to the role. “I love the police and I find it all really intriguing. This is a great way to get an insight into what happens.

“Helping drives me. It’s about making a difference in your community, it’s about the individuals you meet out on the beat. Some of them could be in the worst moment of their lives. It’s a privilege to be an officer that can be first on the scene and the first to offer support to that person.

“It’s not just about fighting crime. Often we will liaise with authorities to help house homeless people for example. It isn’t about just moving them on – it’s about making a positive change.”

In recent months he has noticed an increase in people feeling vulnerable around Newport city centre.

“It’s important we’re out there for those feeling vulnerable, reassuring them. Not telling them these things aren’t happening but by being there when they need us.”

Student Gabriel Abbott, 21, is one of the youngest specials in the force but speaks as if he has been a policeman all his life. He puts it down to what he has learned and experienced while out on the beat over the last two years.

For Gabriel the role of the specials in improving public confidence in the police is now more important than ever.

“In the last two years I’ve seen how integration of specials into policing has improved,” he explained. “We are now taking some new specials out in Newport to engage with shopkeepers, asking traders if they’re okay daily.

“Specials rarely carry investigative caseloads so what that does is gives us the opportunity to be the eyes and ears of our communities, to be out on patrol.

“We’re often the first responders too or are attending quickly in a support role. We’re often stopping dangerous vehicles or we’re even in plain clothes on operations undercover to combat violence and drug dealing.”

He points to his badge on his chest and says: “It can be daunting because people don’t know what these letters mean. I’m just an officer to that person who needs help and we don’t know if it’s a fight, a burglary, whatever.

“They don’t know if we’ve been in the role for two years or two minutes, whether we’re volunteers or full-time officers. And you need to step up and deliver them a proper service at that moment.”

That’s where expert tutoring comes into play and a positive culture where mistakes are actively spoken about and addressed.

“There is pressure – we’re doing new things every day,” Gabriel added. “You might have to stand up in court if you’ve charged someone or you might attend a sudden death or a serious road traffic accident.

“Mentally it can be very challenging but we have the training to help us deal with it. We’re well aware it’s a place where mistakes are acceptable. We’re aware right from the start that we have the ability to learn every day.

“There are moments when you ask yourself: ‘Why am I doing this for free?’. But there are many more times where you think: ‘I can’t believe I’ve been able to do that’.”