The Brady-Dak Duel Was 11 Months in the Making 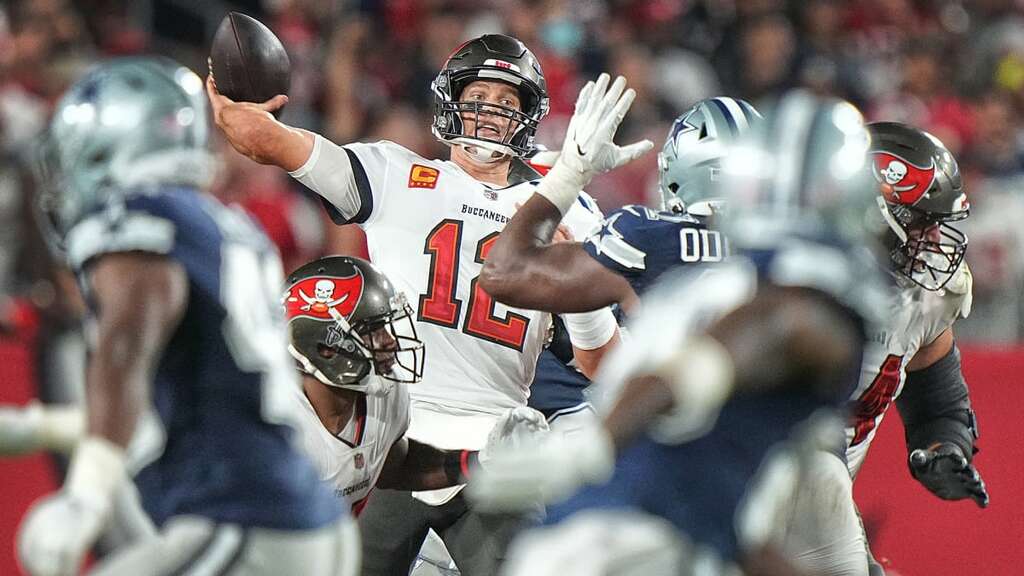 TAMPA — More than 300 days ago, one month into the last NFL season, Tom Brady was struggling to adapt to his first new team in two decades of professional football. Dak Prescott was piloting the top offense in the league for a team that still wasn’t winning. On Oct. 8, Brady and the Bucs fell in Chicago on a Thursday night, their grand experiment in aging quarterbacks off to a muddled 3–2 start. Three days later, the Cowboys lost Prescott for the season, when he broke his ankle, the impact so violent his right foot bent sideways, toward the sideline.

Flash forward to 11 months later, to Thursday night, after everything that happened. After Prescott used a season he never considered “lost” to focus on his mental health so that when he did return, he would be better, fortified, ready, despite a shoulder scare in camp this summer and not having taken a live snap in 333 days. After Brady forged a December bye-week compromise with his coach, Bruce Arians, to reinvigorate their offense—which vaulted Tampa into the playoffs, then into the Super Bowl, then onto boats for the victory float parade.

For both quarterbacks, those months were transformative, in the best ways and the worst ones. Eventually, that led them here, to another season that started the same way the last one ended, with Brady and the Bucs celebrating on the field at Raymond James Stadium, their home field and site of Super Bowl LV. All told on Thursday night, Brady and Prescott combined for 108 pass attempts, 782 passing yards, seven touchdown passes and three interceptions. The NFL schedule czars who salivated over a season-opening match-up that pitted the defending champions against “America’s Team” were gifted a thriller beyond any reasonable expectation. The 65,618 fans who packed the “mask-recommended” stands took in actual, live, in-person football. But the story was the quarterbacks—and how the last 11 months had changed them.

Turns out, Prescott wasn’t the only quarterback playing Thursday who had dealt with a serious knee injury this past spring. Brady has acknowledged that he had a procedure done on his left knee after winning his seventh ring last February. But three sources with direct knowledge of the quarterback’s offseason described the injury and the subsequent rehabilitation after surgery as far more serious than the general public knew. One said that Brady and his team had tended to that knee “for years,” as it gradually—then suddenly, in 2020—worsened.

Last season, according to the same sources, Brady spent a significant portion of each week nursing the knee, having it taped, massaged and treated. He wore tape and braces during games. One of the sources said that Brady’s knee in 2020 marked his most serious injury since he tore the ACL and MCL ligaments in his left knee in ’08. Another predicted that Brady would exceed expectations this season, if that’s even possible, because “he’s playing on two legs, rather than one-and-a-half.”

The last the locals had seen Brady, up close, was when he made an ill-advised toss of the Lombardi Trophy between boats at the Super Bowl celebration last February. They had no idea how much his life changed—and how dramatically—in the ensuing weeks. No one in Brady’s orbit is sure (or will say) when exactly he contracted COVID-19. But most believe he caught the virus soon after he won that championship. They know that he went with his family on vacation around then, that he felt fine upon arrival but soon after started to feel ill.

The diagnosis pushed back the knee surgery that had been scheduled. But once Brady completed his quarantine and twice tested negative, he went in and had the knee fixed. As soon as the procedure ended, the rehab started—and it lasted all the way until the Bucs began training to defend their title. Not that anyone had worried, but one longtime Brady observer watched him at his first practice back. It was obvious. “Zero drop-off,” the observer says.

With Brady back, at more than full strength, the Buccaneers could resume their march toward becoming the first repeat NFL champion in more than a decade—since Brady and the Patriots won back-to-back titles in the 2003 and ’04 seasons. The Bucs, through some deft roster maneuvering by general manager Jason Licht, returned all 22 starters. For Brady, that meant continuity with offensive teammates, another season throwing to Chris Godwin, Mike Evans, Rob Gronkowski and Antonio Brown. Brady, of course, told them all to forget about last season, his New England ethos forever intact.

His presence alone simplified that exercise, bolstering the crowd that filed in on Thursday drunk on anticipation and whatever the bartenders happened to be serving at Bucs Beach. Their team was favored to beat the Cowboys and ranked among the top contenders to return to the game Brady seems to play in every season. There were Super Bowl banners, helicopters circling overhead, fireworks exploding and thousands of fans clad in No. 12 jerseys. Even the storm that threatened a downpour abated by the time the game kicked off.

Brady trotted onto the field for career start No. 300, at 44 years not-exactly-old, as the only active player remaining from the NFL Draft in 2000. Every draftee in ’01, ’02 and ’03 had already retired. San Francisco rookie Trey Lance had been born right about when the Patriots took Brady with the 199th-overall pick.

The Cowboys won the coin toss and elected to defer, effectively handing the first drive of this NFL season to the greatest quarterback who has ever lived. Brady took the initial snap and handed the ball off. His first pass fell incomplete. The Bucs punted. Consider that a prelude to the preview that Tampa unspooled on its second drive.

There was 12, in his 22nd professional football season, completing six of seven passes to four different receivers. Brady found all his favorites, working the entire field, arm strength bolstered by a second healthy leg. His 5-yard strike to Godwin produced the first points of the NFL season. His Bucs didn’t fall behind until late in the fourth quarter. If the general sense given from Tampa’s coaches last January was that their offense had not peaked yet, despite the playoff run, then this sequence seemed to prove them right.

Prescott didn’t get the memo, didn’t care about the odds. He looked more than fully recovered. He looked sharp, decisive, prepared to equal a quarterback he has long admired. He connected with Amari Cooper 13 times and CeeDee Lamb for seven more completions. Those wideouts alone combined for 243 yards and three scores.

More importantly, Prescott took his share of hits. He seemed bothered by a second-half injury to his left hand. He even went down a few times via ankle grabs. But Prescott also reinforced a notion that should be obvious by now: Brady isn’t the only quarterback who oozes toughness on pro football fields. They’re similar that way.

Tom House, Brady’s longtime throwing guru, watched the game from his home in California. He couldn’t help but be reminded of another former protégé, baseball flamethrower Nolan Ryan, who pitched until age 46. At that point in his career, Ryan was much like Brady is now—somewhere between his teammates and his coaches, sort of like a favorite uncle in the locker room. “An island unto himself,” House says.

The quarterback whisperer had last watched Brady play in person last season in New Orleans, when Brady helped nudge Drew Brees into retirement with a comeback playoff victory. Last month, House stopped by a workout that Brady held at UCLA with former teammate Julian Edelman. His eyes backed up what their scientific data, the proprietary metrics that House uses, already told him. “All the things that I evaluate a quarterback with, he hasn’t lost anything,” House says. “He’s throwing the ball better now.” In fact, trying to fine tune mechanics as fine-tuned as Brady’s throwing motion has become, House says, “almost boring”—if it wasn’t so unusual, so once-in-a-lifetime, or once, period.

Still, as Brady reminded reporters early Friday morning, “it’s never perfect.” He was right—and he was wrong. The Bucs did turn the ball over four times, including two Brady interceptions (even if neither were his fault). The Cowboys did convert nine of 17 third downs. Prescott did lead a remarkable comeback, did throw for 403 yards, did vault into the earliest of leads for Comeback Player of the Year. It was, for the NFL, the perfect start.

But there was Brady, at the end of yet another football game. His team trailed, 29–28, with 1:24 left on the game clock. There was Brady, mounting another last stand. (How many times has that been said before?) There was Brady, leading Tampa down the field, leaning on Gronk when he most needed to. And there was Brady, watching as Ryan Succop nailed a 36-yard field goal to seal yet another win in a career defined by them. “Never a doubt,” Arians quipped.

There are bigger games ahead, of course. No one knows that better than Tom Brady. And yet, no one in his orbit, none of the sources, believe that this will be his last season, either. Brady has often maintained a goal of playing until he’s 45 years old, when he would be older than any quarterback who has ever started an NFL game. But House says that next season isn’t an ironclad end point. He says they settled on that number years ago, when Bill Belichick asked both House and Brady for their projections. Forty-five sounded about right. Maybe it will be. Maybe not.

What will determine how long Brady plays is how long he feels like he can compete at the level he desires to compete at. House believes Ryan could have pitched for another season or three, but he retired because of the toll that it took to recover, rather than because he had lost his fastball. There’s a difference, known only to elite athletes who play forever. “There’s no reason Tom can’t be better at 45 than he was at 25,” House says.

So how about 50? How long can this whole thing go? “I’m not going to open that door,” says one confidant, who also didn’t outright dismiss the possibility. At this point in Brady’s career, he’s year-by-year, game-by-game. And if Game 1, Week 1, of the 2021 NFL season is any indication, there’s still quite a bit of football left.