The ‘Biloela family’ are going home – but what will Labor do with thousands of other asylum seekers in limbo in Australia?

The long-running case of the “Biloela family” has taken a step forward, after the new Labor government confirmed they would be allowed to return home to Queensland.

But their final immigration status is still outstanding. It’s yet to be seen if the immigration minister will choose to exercise their discretion to grant them permanent visas.

So what are the other main policies we can expect from the newly elected government affecting thousands more asylum seekers and refugees in Australia?

The couple met in the Australian community, married and had two children. The family lived in the town of Biloela, Queensland, where Nades worked in the local abattoir and Priya volunteered in the community.

In March 2018 the family were taken to Melbourne and put into into detention in after the parents’ refugee claims were refused by the government. The youngest daughter, Tharnicaa, never had the opportunity to have her refugee claims assessed.

Read more: How the Biloela Tamil family deportation case highlights the failures of our refugee system

In August 2019 a last minute injunction saw the family’s attempted removal back to Sri Lanka stopped mid-flight, and they were taken to detention on Christmas Island where they stayed for almost two years.

In June 2021 three-year-old Tharnicaa was medically evacuated to Perth after contracting pneumonia and sepsis.

The family of four have since been living in Perth in community detention. This means they’re able to live in the community but have limited rights. For example, parents Priya and Nades can’t work, and the family haven’t been able to return back to Queensland due to conditions placed on their community release by the former immigration minister.

A high-profile community campaign led to an election commitment from both Kristina Kenneally, then shadow minister for home affairs, and then opposition leader Anthony Albanese to grant visas and allow the family to return to Biloela.

People like the Murugappan family are part of a larger group of around 30,000 people seeking asylum who arrived in Australia by boat between August 2012 and December 2013, known as the “legacy caseload”. People who were found to be refugees (approximately 19,000) were only granted temporary visas, which doesn’t allow them to settle permanently in Australia or sponsor close family members who are overseas.

Labor’s policy is to abolish temporary protection visas and to grant permanent visas to those who’ve been found to be refugees.

Labor has also agreed to getting rid of the fast track system that was used to process cases from the legacy caseload, due to concerns around the fairness of this system, particularly for those who have been refused, like the Murugappan family.

However, Labor has no stated policy on what will happen for other people in the same situation as the Murugappans who have remained in Australia for the last 10 years.

The ALP’s policy is to maintain the previous policy of Operation Sovereign Borders, which includes the interception and turn back of people seeking asylum who come to Australia by boat.

A boat intercepted by Australian Border Force on the day of the election has already been turned back to Sri Lanka on the direction of Acting Prime Minister Richard Marles, after “thorough screening” of each persons’ protection status.

The ALP will also continue the previous government’s policy of offshore processing.

There are still around 1,400 people who were sent to Nauru and Papua New Guinea in 2013 awaiting resolution of their cases. Some are eligible to be resettled in the United States and New Zealand. The ALP’s policy is to continue to seek resettlement in other countries and not allow them to settle in Australia.

Australian law provides for the mandatory detention of anyone who doesn’t have a visa. Once detained, it isn’t possible to seek review by an independent body or court. People are kept in detention until they are granted a visa or leave the country. Historically both Labor and the Coalition have kept the same policy.

Australia’s immigration detention policy is among the harshest in the world. People can be detained for several years without a resolution of their case. This is especially true for people who cannot be returned to their country for fear of persecution or who cannot be sent anywhere because they’re stateless.

Read more: 'Futile and cruel': plan to charge fees for immigration detention has no redeeming features

As of February 2022 the average time spent in detention was 689 days. Some people have been in immigration detention for over 10 years.

Labor’s policy platform states it will operate a “humane and risk based immigration detention policy”, and agrees that “detention that is indefinite or otherwise arbitrary is not acceptable and the length and conditions of detention […] will be subject to regular review”.

But without a commitment to legislative change to allow courts to review decisions to detain, the current practice seems unlikely to change.

Expansion of the refugee and humanitarian program

Labor’s policy is to increase Australia’s annual humanitarian intake from 13,750 to 27,000 per year.

It has also pledged to progressively increase the community sponsored refugee program from 1,500 to 5,000 per year. This program enables individuals, families, community networks and businesses to help sponsor refugees to resettle into Australia, allowing for even more refugee places.

While these policies are a welcome increase, refugee organisations in Australia are hopeful there can be more, particularly in view of the United Nations High Commissioner for Refugees’ (UNHCR) announcement this week that the global number of forcibly displaced people has reached the staggering milestone of 100 million people.

The Greens and the teal independents have voiced concerns over Labor’s policy regarding Operation Sovereign Borders, detention and the refugee and humanitarian program. It will be interesting to see whether they can influence any change.

And there’s no doubt any changes Labor makes to refugee policy will be an area the opposition will be keen to exploit.

Mary Anne Kenny has previously received funding from the Australian Research Council and sitting fees from the Department of Home Affairs. 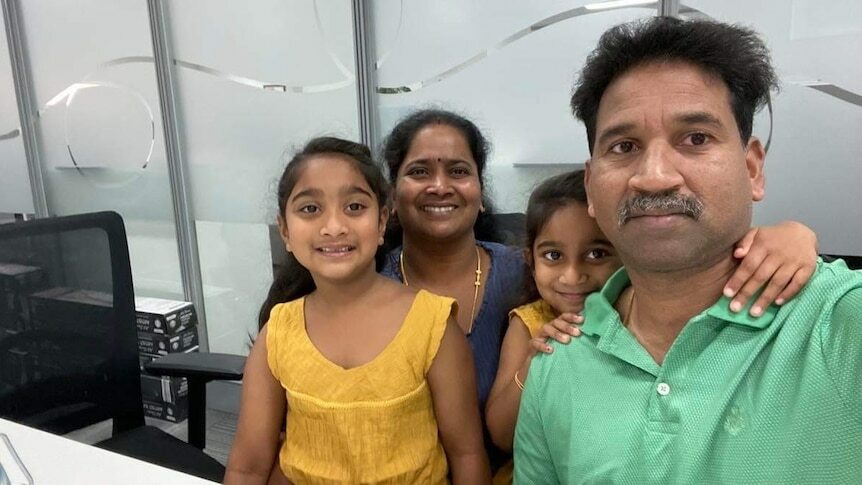 "All refugees are survivors. They need hope."

Pedestrian.tv
Celebrations at last as Murugappan family to be back in Biloela for youngest daughter’s birthday