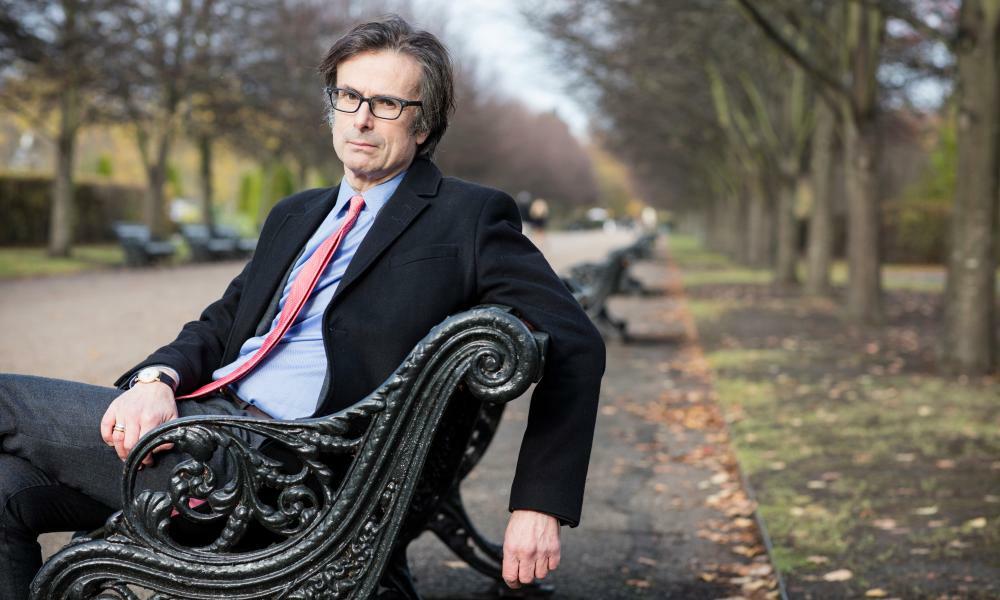 Gil Peck, political journalist for the fictional Financial Chronicle in the 1990s, bears more than a passing resemblance to his creator, Robert Peston, who worked for the FT as political editor in the same decade. There’s the background: both are sons of Labour stalwarts, Jewish, from north London. Both are always out for a scoop. “All that interests me is the narrative, the story and who controls it… My job is to eavesdrop, then share it with you,” Peck says.

It’s 1997 and “Labour’s immaculately groomed and smooth young leader” Johnny Todd is snowballing his way to an election to the soundtrack of their campaign anthem, Blur’s Song 2. Peck is questioning a source when he learns that his estranged sister, Clare, who works for the chancellor, has been knocked off her bike and killed. There’s something odd about her death, though: why wasn’t she wearing her helmet? And was she trying to get a message to Peck before she died? As he digs into the mystery, Peck finds secrets that lead to the heart of government and the media empire of which he is part. There’s more than might be expected here about the tax status of pension funds, but this debut novel is a hell of a read.

Velvet Was the Night
Silvia Moreno-Garcia

Silvia Moreno-Garcia is a magician able to switch genres with ease. Her previous novel, Mexican Gothic, was a dark and brilliant slice of gothic fantasy; her latest, Velvet Was the Night, is a superb noir thriller set in Mexico City in the 70s following the student massacre known as “El Halconazo”.

Maite is a secretary who is desperate to find the sort of romance she reads about in her comic books. Elvis is a criminal who much prefers rock’n’roll to beating people up and who studies the dictionary to learn new words. When Maite’s neighbour, the glamorous Leonora, disappears, Maite, looking for a few thrills in her humdrum life, sets out to find her, discovering her links to student radicals and some very dangerous people. “She could be held by a shadowy villain in an old mansion. The idea of drifting into one of the storylines from her comic books appealed to Maite immensely.”

Elvis, too, is put on Leonora’s trail by his boss, the mysterious and powerful El Mago. As their paths converge and they get closer to the truth, their lives become more dangerous. I can’t wait to see what Moreno-Garcia does next.

In Emma Haughton’s The Dark, A&E doctor Kate North accepts a job as an emergency replacement on the UN research station in Antarctica. The previous incumbent, Jean-Luc, died in a horrific accident on the ice, and the team need her. It’s a questionable decision: we soon learn she is scared of the dark and months of pitch-black winter are looming. But she wants to forget a tragedy in her recent past. “Back when I’d accepted the job, my anxieties had seemed remote, manageable. But now, standing here, the prospect of that endless night ignites another flare of misgiving.”

Once she’s in the post, she starts to discover details about Jean-Luc’s death that disturb her. Addled by the drugs she’s taking to deal with her anxieties and grief, unable to sleep in the permanent night, she wonders who she can trust. “Something is very wrong here, I realise. No… worse. Someone is very wrong here.”

Haughton has chosen a fantastically atmospheric setting for her first crime novel and although her protagonist makes a series of dubious choices, it’s a chilling race to the finish to discover whodunnit.

Not content with having written four other excellent crime series (the Tony Hill and Carol Jordan novels are probably her most popular, though Karen Pirie is my favourite), Val McDermid has spent lockdown formulating a fifth. It’s 1979 and Allie Burns, an ambitious young journalist, is the only woman working on the news desk at the Daily Clarion in Glasgow. Desperate to prove her worth and to be given some proper stories, she helps fellow reporter Danny dig into a possible case of tax fraud and investigates a terror plot, making some very powerful enemies. When she finds a body, her investigations get personal. As she’s advised by a friend: “Strathclyde police are nothing like Wexford or Morse or Dalgliesh. Mostly, they couldn’t detect their way out of a paper bag with a map and a torch. We need the likes of Miss Marple or Philip Marlowe here.”

McDermid, who worked as a journalist in the 70s and 80s, gives a nail-biting account of the newsroom, and Allie is another character I’m looking forward to learning more about.