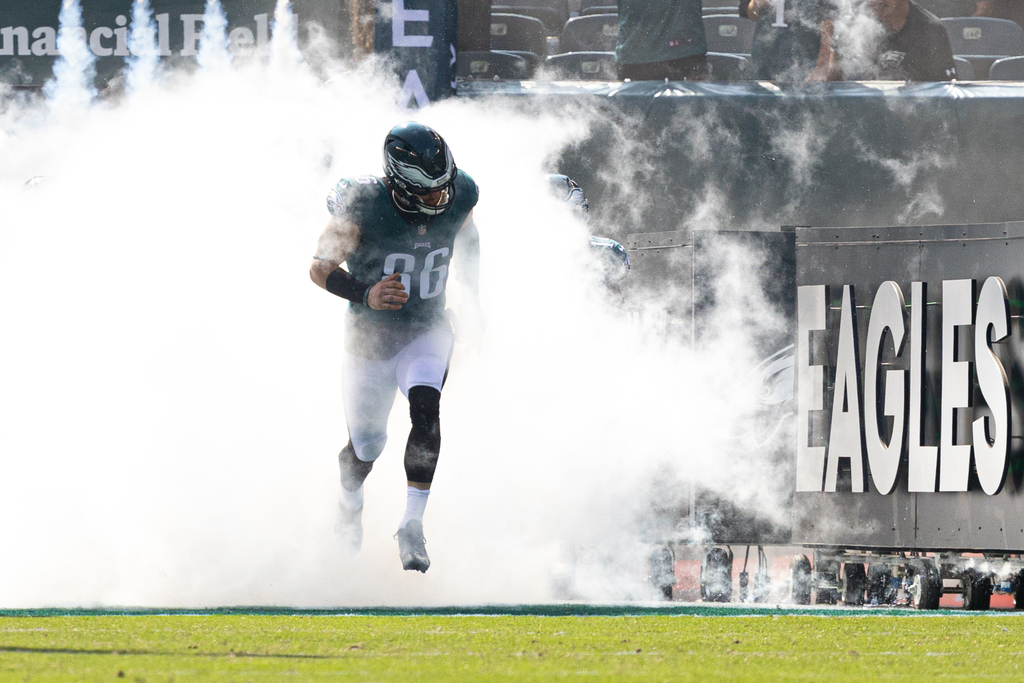 Every week, at least one player becomes my fascination of whether he’s worthy of a fantasy football start or bench. The decision can be a mental wrestling match, but for the purpose of brevity, only one player can be chosen as the fantasy football gamble of the week.

Being on a two-game winning streak heading into Week 6 — after a few bad beats, no less — has me feeling much better about getting this thing turned around following an 0-3 start. Last week, the recommendation was New Orleans Saints WR Deonte Harris for a projected 18.8 PPR points. He broke the 80 percent threshold with a two-catch, 72-yard, one-TD performance (15.2 PPR) before exiting with an injury.

A few reasons make Ertz a risky play in fantasy football this week, but the upside to starting him outweighs those possible pitfalls. Tight end Dallas Goedert was placed on the Reserve/COVID-19 list Tuesday, meaning he has two clear the league’s protocol by passing tests in consecutive days as a fully vaccinated player. That means this goes right to the wire for a Thursday Night Football contest.

Other reasons for concern include the Buccaneers are exceptionally susceptible to attacks by wide receivers, and Philadelphia has a trio of capable weapons in DeVonta Smith, Jalen Reagor, and Quez Watkins.

Then there’s the a backfield with a a pair of capable pass-catching options who could see more targets this week with the Bucs being so strong at limiting the running game. Teams tend to use short-area passing as a means to avoid the trenches and find a little freedom in space. Philadelphia has largely ignored its best playmaker in running back Miles Sanders, which I don’t see changing against Tampa’s run defense. There will be a few vicinity-based targets lost to RB Kenneth Gainwell that could go to Ertz.

Tampa did a remarkable job at limiting Miami’s Mike Gesicki last week as he was just starting to heat up. This point is rather subjective in the sense Miami’s situation is not all too close to Philadelphia’s in that Philly has a better QB and also one who can evade the pass rush in Jalen Hurts.

The Dolphins threw all day long to RB Myles Gaskin (10 catches) and were without two of the top receivers on the team. I won’t pretend it’s a 100 percent fair comparison to the Eagles’ situation for Ertz, but there’s some justifiable concern the play-calling could work in a similar fashion.

Getting back on track, because this is about why you should play Ertz and not why to avoid him: Presuming Goedert is indeed absent, the bulk of the positional targets almost exclusively will be Ertz’s as undrafted rookie Jack Stoll has no track record to suggest otherwise.

The Buccaneers will be without linebacker Lavonte David and safety Antoine Winfield Jr., both of whom play key roles in defending the tight end position. DE Jason Pierre-Paul is questionable with shoulder and hand injuries. He not only applies considerable quarterback pressure but also drops into coverage as well as most linebackers.

Unlike with Miami’s Jacoby Brissett, Hurts can move around to buy time and direct his receivers to get open. Tampa Bay is more than capable of applying heat, even though the sack figures haven’t been there this year. Hurts’ escapability negates some of this edge, regardless of right tackle Lane Johnson being out again as he tends to personal matters.

After two quiet games to start the year, Ertz caught 10 of 15 targets for 113 yards and a score in Weeks 3 and 4 combined, going for 12 or more PPR points in each game. He was targeted six times last week vs. Carolina but held to just one catch — that’s a rarity, and credit goes to a quality Panthers defense of TEs.

The same cannot be said for that of Tampa Bay. Even when healthy, this group has struggled to limit the position dating back to last year, and some of it is by design — keep everything in front of the safeties and let them make tackles to avoid the big play. Tight ends have posted five games topping 10 PPR points against the Buccaneers so far, including last week when Tampa held Gesicki to just 8.3 points. All three touchdowns came in Weeks 3 (LAR) and 4 (NE) to teams not known as being TE powerhouses.

Ertz can paper cut this defense to death. I’m not expecting some kind of true renaissance for the nearly 31-year-old veteran, but he still has the chops to get it done for gamers in leagues that reward receptions, even if Ertz fails to find the end zone. Tight end is a volatile bunch. Between several key injuries and the arrival of bye weeks, gamers could do much, much worse than rolling the dice on Ertz turning back the clock for one night.