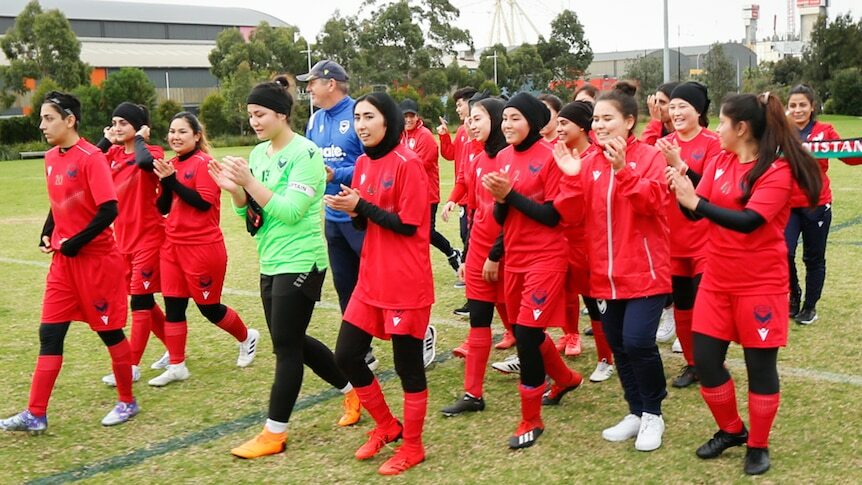 'Symbolic' Afghanistan national women’s soccer team gives a voice for the voiceless on and off the pitch in Melbourne
More than 11,000 kilometres from Kabul, the Afghanistan National Women's team returns to the pitch.

The decree, which calls for women in Afghanistan to show only their eyes and recommends they wear the burqa, evoked…

Horse-racing journalist Ron Flatter fell in love with Aussie rules football in 1982 and has remained faithful ever since.

‘The best day’: Afghan women’s football team find back of the net and rediscover joy

It’s an overcast Sunday afternoon at Ron Barassi Snr Reserve, a small community ground tucked away in Melbourne’s Docklands. On its lone pitch, two teams of women are approaching the 20th minute of their Victorian Women’s State League Four West clash. Both have had their chances, but the score remains goalless.

Aside from the larger than average crowd and a handful of cameras scattered around the touchline, it’s a scene largely archetypal of community football. The only seats to be found are the portable plastic variety; laid out as rudimentary benches for the two sets of substitutes. A few hours earlier, coaches had been putting up the nets, driving the corner flags into the turf and cleaning up dog refuse that had been left on the pitch by apathetic dog walkers.

It’s all very mundane, a typical autumn Sunday in Melbourne. Yet for the Afghan women’s national team that is in action for the first time at their new Australian home ground, resplendent in new red kits, there is beauty in the benign.

“[Returning to play was] a moment of pride for me, I am proud of my teammates; that they have managed to stand on their feet,” says Fatima*, who captains the side. “I back myself as well to be able to stand on my feet again after all that we went through.”

These players’ lives have come under threat simply due to a desire to play football. That they could simply jump on a bus and play a game that wouldn’t draw a second glance from an uninformed passerby is a novel experience for them. Routine for others, the chance to play football with friends or to dance to music blaring out from a portable speaker before heading to the dressing room is cause for celebration.

This team has been held up as an inspiration and a symbol around the world. They are a group who’s mere existence constitutes resistance. Fleeing their homeland in the face of the Taliban’s takeover last August, every game they play in exile is a reminder of the agency they refuse to surrender, a spirit that won’t be broken, and a reminder to the world to not forget the women that now exist under the Taliban’s rule. They want to pressure Fifa to uphold gender equality standards and restore their international status.

But what cannot be forgotten is that within all these moments of global significance are wrapped smaller, individual achievements; deeply personal milestones that come from living life the way they choose – be it attending school, going to work, or playing football in State League 4.

“The moment I was at the Kabul Airport and saw all the incidents and tragedies I could not dream and imagine for this day and be able to return to the football field,” says Fatima, who has been emotional in past interviews recalling her evacuation from Afghanistan.

“But, the moment I got on the plane, I got the courage and confidence that I have overcome so much, saw such a grim state of my country and got the determination to strive and earn back all that I have lost. I will never forget those experiences, but now I want to bring pride and privilege to my country together with my teammates, who were crying and sad back then.”

When Nilab* broke through 18 minutes into last weekend’s game and coolly slotted into the bottom corner, there was only pure, unadulterated joy. The team had played their first competitive fixture since arriving in Australia the week prior, but that game ended 0-0. This was the first time they had been able to celebrate a goal since arriving in what, at least for now, is home.

Sprinting away in celebration, Nilab slid on her knees before kissing the turf and pointing to the sky. Adeba* arrived with a pack of teammates that surrounded and embraced her in a moment of joy. It was a scene that was simultaneously for the entire world to celebrate and one just for members of the national team in exile.

“The entire team – I could see everyone since I was the goalkeeper – I saw everyone extremely excited, supporting each other on the field and from the fence,” says Fatima. “I can’t explain and paint a picture of my emotions at that moment – only if someone could have seen all that.

“The joy the girls experienced after such a long time, being away from the motherland and family. It was the best day, the best thing that happened to the girls in such a long long time.”

One of a number of figures who had sprung into action to help evacuate the team from Afghanistan was Craig Foster, and the former Socceroos captain and human rights campaigner was on hand to witness the goal.

“You can see the sheer delight to again be scoring goals,” he said as he watched on. “For them to just be taking the park is already a triumph. But then to see the goals they’re scoring, the great job Jeff [Hopkins, Melbourne Victory’s championship-winning A-League Women’s coach who is leading the team] has done with them and just to see them with their smiles and enjoying themselves so much is very powerful.”

Sunday quickly became a day of firsts; the team poured in nine more unanswered goals as they recorded their first win in Australia. They thought it could have been more.

“When the girls later spoke with me, to each other with joy and laughter – it was priceless,” Fatima says. “For me, my team is like a second family, I was so happy to see everyone content, happy and smiling.”

'Symbolic' Afghanistan national women’s soccer team gives a voice for the voiceless on and off the pitch in Melbourne
More than 11,000 kilometres from Kabul, the Afghanistan National Women's team returns to the pitch.

The decree, which calls for women in Afghanistan to show only their eyes and recommends they wear the burqa, evoked…

Horse-racing journalist Ron Flatter fell in love with Aussie rules football in 1982 and has remained faithful ever since.