Whatever Ya Fucken Do, Don’t Show Nonna The Food That Was Served At Kourt Travis’ Wedding

the pasta portion size at kourtney kardashian’s wedding is the one of the saddest things i’ve ever seen pic.twitter.com/Xq4XUMe5mq

So this is the serving of pasta guests got at Kourtney’s wedding and if I’d been there I’d have walked out in protest. pic.twitter.com/8EOlHWtEta

the pasta portion sizes at Kourtney Kardashian’s wedding yesterday. personally if a portion isn’t the size of my face I’m not interested pic.twitter.com/Hgeu9CdNqr

an icon a legend

it’s the finger for me

The post Whatever Ya Fucken Do, Don’t Show Nonna The Food That Was Served At Kourt & Travis’ Wedding appeared first on PEDESTRIAN.TV .

and ‘s lush ceremony in Italy. The newly-hitched couple got married for a  time over in Italy in the kind of show-stopping event that would approve of. Everything was adorned with candles and dripping in gold Italian décor and red velour as Travis and Kourtney said their vows in front of a bumper crowd of friends and family. It was all so bloody decadent, all except for one detail: the food. Thanks to the various siblings and kids of the Kardashian-Jenner-Barkers, those of us sitting at home in our trackies and not on the back of a yacht in Italy got a look in, too. Over on TikTok Kylie posted up a bunch of vids from inside the reception, basically giving everyone a behind-the-scenes squiz of what’s most going to be a three-parter episode of  in due time. One particular vid has subsequently gone viral after fans spotted the sad-looking portions of food. In the vid shared to IG, a chef uses a ladle and tongs to serve a teeny tiny amount of pasta on a plate. Folks have taken to Twitter to slam the abject travesty of serving pasta in ITALY, of all places, with such small portions. There’s  in a hell of a bejewelled bodysuit. There’s Kylie, and having a boogie (??) at their table to the Bee Gees. And then there’s Kris just absolutely demolishing the dance floor with ‘s mate , which honestly I have to respect. Go off, mum. Speaking of the Barker kids, both Landon and  lit up Instagram with their own footage from the big night. Landon — in a  silver glittery suit — was spotted belting out “Die In California” with . And Alabama went right ahead and posted up a video of her dad Travis taking Kourtney’s black garter belt off with his teeth — easily the most important (and fitting) wedding tradition for our chaotically horny parents. Honestly looking at all of this behind-the-scenes/insider footage makes me want to watch the eventual episode it’ll be so I can just really lean into the fact that someone’s out there living my 00s emo kid wedding fantasies. Love this for them (and us).
Sign up to read this article 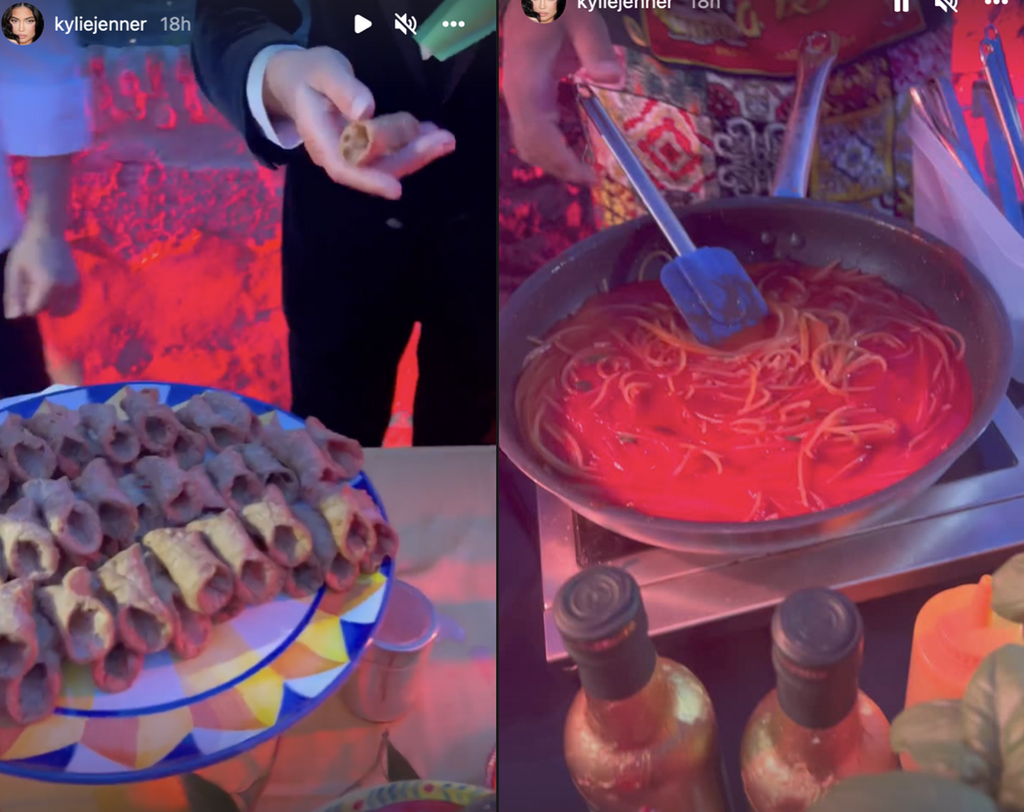 The Independent UK
One subscription that gives you access to news from hundreds of sites
‘One of the saddest things I’ve ever seen’: Internet mocks small pasta portions at Kourtney Kardashian’s wedding

‘If I’d been there I’d have walked out in protest,’ wrote one user

Fans of Kourtney Kardashian and Travis Barker have been going wild over snaps from the couple's lavish wedding in Portofino,…