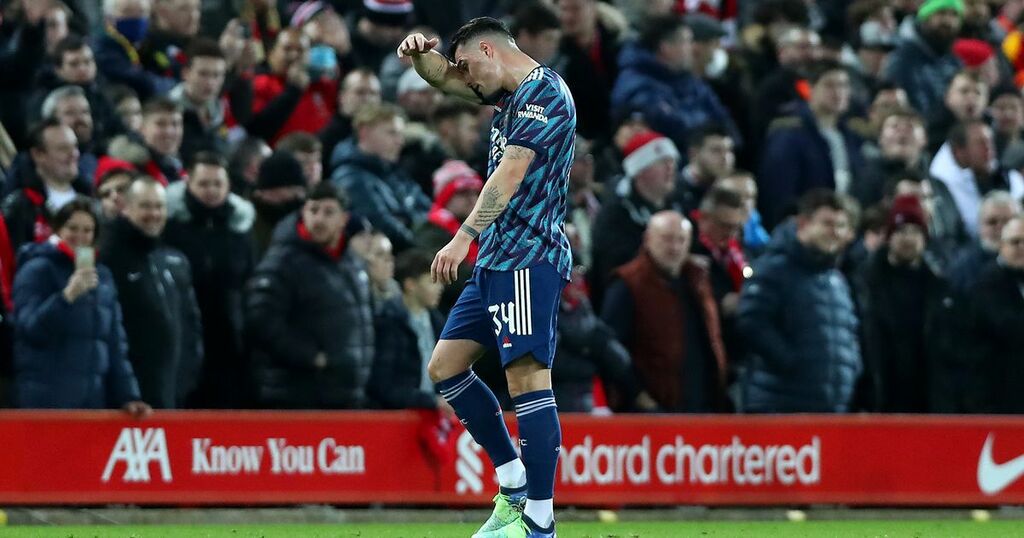 Granit Xhaka was shown the fifth red card of his Arsenal career on Thursday evening.

The 29-year-old was the last man back for the Gunners as Andy Robertson switched the ball to Diogo Jota and Xhaka proceeded in taking the Liverpool attacker down when he was clean through on goal.

Xhaka will now be suspended for Sunday afternoon's north London derby against Tottenham, as well as next week's second-leg versus Liverpool at the Emirates Stadium.

Usually a red card in these circumstances would mean just a one-match suspension, but because it is his second dismissal of the season, the Swiss midfielder will be absent for two matches.

ESPN journalist Dale Johnson explained on Twitter: "If that's a red card for serious foul play, Granit Xhaka will get a 4-game ban.

"3 games for this red card and an additional game as it's his second red of the season. If DOGSO (denying obvious goal scoring opportunity), it will be 2 games.

"Opta has recorded the red card as DOGSO for the moment, so it will be 2 games."

This leaves Arsenal with just Albert Sambi Lokonga as the sole senior midfield option, with Charlie Patino, who is still only 18-years-old, also someone who can be called upon by Mikel Arteta.

Jamie Carragher, who was on punditry duty for Sky Sports on Thursday night, slammed Xhaka for making an "absolutely ridiculous challenge" on Jota that led to Michael Oliver pulling out the red card.

Carragher said: "Liverpool are quite fortunate where they find themselves. What I find interesting now, is the way the top teams play now. When you're a defender now - and we see Kieran Tierney in there - his job, even though he's got four or five players higher up the pitch, is still to go and press.

"And that's the guy that gets Xhaka sent off. Tierney then follows the ball to Jordan Henderson, because again, it's about: 'We push in and press'.

"And his mate Gabriel, he's pushed in with Roberto Firmino. This is not a mistake by them, this is what they are told to do. But they haven't got close enough to affect the play. And now you've got a race between Xhaka and Jota. Xhaka knows he's there, he has two or three looks.

"This pass from Robertson is perfect. Jota thinks: 'I've just got to chest it' and Xhaka does what Xhaka does. He makes an absolutely ridiculous challenge when Jota has got so much to do."