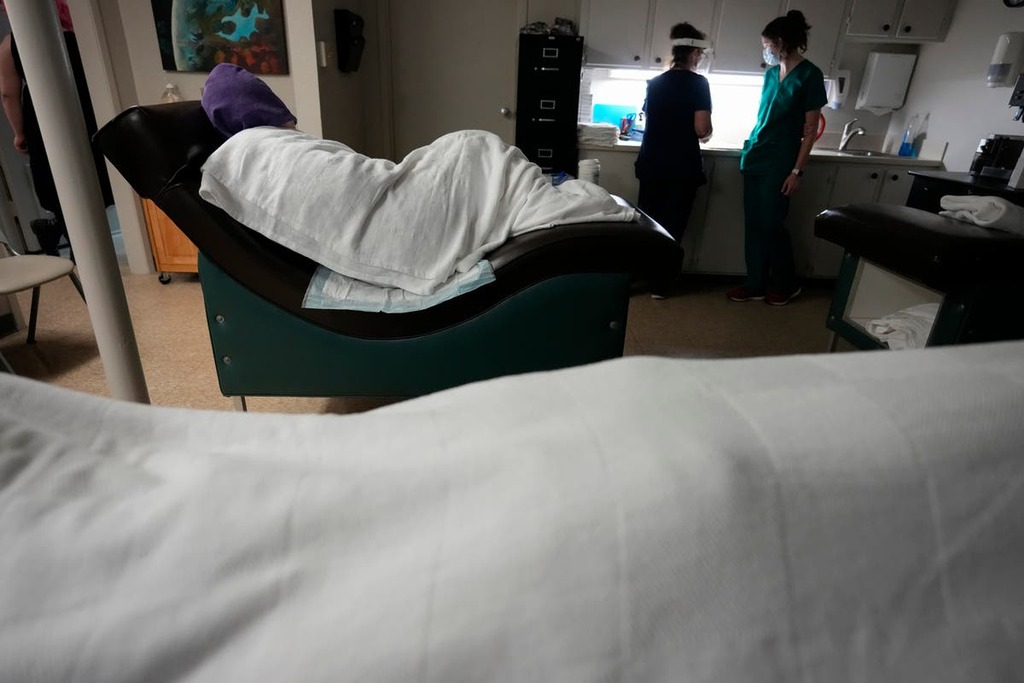 The Independent UK
Jay Ambrose: The abortion debate is really about love v. misery
It has been around for half a century, Roe v. Wade has, and besides this Supreme Court ruling facilitating something…

Tribune News Service
One subscription that gives you access to news from hundreds of sites
Abortion in Mississippi is already limited to a single clinic. If Roe v Wade falls, it could soon be outlawed entirely

The "Pink House" in Jackson has been fighting for safe, legal abortion for more than a decade. It's now at…

The Abortion Debate Is Suddenly About ‘People,’ Not ‘Women’

Say what you like about the ACLU; it knows how to get people talking. But not necessarily in terms favorable to the ACLU. Late last month, the civil-liberties organization was revealed to have ghostwritten Amber Heard’s contentious Washington Post op-ed about suffering from domestic violence; the article was timed to coincide with the release of her film Aquaman. And on May 11, the ACLU once again caught the moment, posting a tweet that perfectly encapsulates a new taboo on the American left: a terrible aversion to using the word women.

According to the ACLU,

■ Black, Indigenous & other people of color

■ those working to make ends meet

Wait. Run that second point past me again? Surely one of the many things to recommend lesbian sex is that it doesn’t risk getting you pregnant. Unsurprisingly, multiple commentators struggled to see how abortion bans “disproportionately harm the LGBTQ community”—even if those laws do indeed harm parts of it, such as queer women and trans men who have procreative sex. The ACLU’s defenders have pointed to data from 2015 showing that high-school students who self-define as lesbian but have had sex with male partners are more likely to get pregnant than their female counterparts who identify as heterosexual. But comprehensive longitudinal studies have found that lesbians across the age spectrum are about half as likely to get pregnant as straight women. Another suggestion would be that abortion bans could also affect IVF provision, which many gay and lesbian couples rely on to have a baby. To a casual reader, though, the ACLU has used phrasing that reads like an incantation—a list of disadvantaged groups that are more interesting than women. There’s something of the record-store hipster about it all: I care about groups with intersecting oppressions you haven’t even heard of.

The one word notably absent from the ACLU’s tweet is particularly baffling because 99.9 percent of those who need abortions are women. (The Guttmacher Institute estimates that about 500 trans or nonbinary Americans had an abortion in 2017; the CDC recorded a total of 609,095 abortions that year.) Centering women in the conversation merely reflects this fact, and neither slights the struggles of transgender people nor denies their existence.

To be generous, perhaps the ACLU didn’t mention women because the organization views their disproportionate victimization by abortion bans as a given—a fact too obvious to mention. “I don’t think anyone is at serious risk of forgetting that most of the people who need abortions are women,” the ACLU communications strategist Gillian Branstetter told me. “Certainly nobody within the ACLU.” Although the tweet attracted a storm of criticism online, Branstetter said my concerns were the first she had heard.

This isn’t the first time the ACLU has dodged the W-word. Last year, the group infamously rewrote a Ruth Bader Ginsburg quote about abortion access being central “to a woman’s life, to her well-being and dignity” to remove the gendered language. In the revised version, Ginsburg fretted about “when the government controls that decision for [people].” (Which people? Do they share any characteristics that might be relevant? No one can say.) The ACLU’s chief executive later apologized, but here the group is again, removing biological sex from a conversation in which biological sex is unavoidable. The right has declared a war on women. The left has responded by declaring a war on saying “women.”

The ACLU is not alone in neutering its campaign for abortion rights. Last week, a friend who wanted to raise funds for the cause asked me to recommend an American organization still willing to acknowledge that abortion is a gendered issue. Finding a candidate was surprisingly tricky. The word women has been purged from the front page of the NARAL website, while the Lilith Fund helps “people who need abortions in Texas.” (However, the group notes elsewhere that most of those who call its hotline are “low-income women of color.”) Fund Texas Women has been renamed Fund Texas Choice. The National Abortion Federation’s response to the Supreme Court leak noted that it will “keep fighting until every person, no matter where we live, how much money we make, or what we look like, has the freedom to make our own decisions about our lives, our bodies, and futures.”

One of the most irritating facets of this debate is that anyone like me who points out that it’s possible to provide abortion services to trans people without jettisoning everyday language such as women is accused of waging a culture war. No. We are noticing a culture war. A Great Unwomening is under way because American charities and political organizations survive by fundraising—and their most vocal donors don’t want to be charged with offenses against intersectionality. Cold economic logic therefore dictates that charities should phrase their appeals in the most fashionable, novel, and bulletproof-to-Twitter-backlash way possible. Mildly peeved centrists may grumble but will donate anyway; it’s the left flank that needs to be appeased.

When I questioned the wisdom of foregrounding the small minority of people who seek abortions but do not identify as women, the ACLU’s Branstetter told me, “Transgender people do not have the privilege of pretending that we do not exist. When we use inclusive language, it’s because we recognize that transgender people do exist.” Such language, she argued, is “not at all at odds with the broader mission of ensuring that anyone who wants an abortion can have access to it.” Yet little evidence suggests that the ostentatious banishment of women will help the American abortion-rights campaign succeed. In Britain, where I live, the British Pregnancy Advisory Service, a major abortion provider, announced that it would continue to use women and other gendered language in much of its general literature, while developing tailored materials for clients who identify otherwise. Not only has the sky not fallen as a result, but Britons continue to have access to state-funded abortions, paid for out of general taxation. While American charities congratulate themselves on the purity of their language, the communities they serve—people of all genders who could have a free abortion in Britain—struggle to access terminations. No one should be polishing their halo here.

[Helen Lewis: How to win the abortion argument]

Language battles should not distract us from the true injustice raised by the potential repeal of Roe v. Wade: the removal of the right to privacy and bodily autonomy for 51 percent of Americans. But something is lost when abortion-rights activists shy away from saying women. We lose the ability to talk about women as more than a random collection of organs, bodies that happen to menstruate or bleed or give birth. We lose the ability to connect women’s common experiences, and the discrimination they face in the course of a reproductive lifetime. By substituting people for women, we lose the ability to speak of women as a class. We dismantle them into pieces, into functions, into commodities. This happens in many ways. This week I also saw an Axios editor rebuke a New York Times reporter for writing “surrogate mothers” rather than “gestational carriers”—as if the latter phrase were not dehumanizing, a whisper away from “vessels.”

In my view, the best argument for gender-neutral language in the abortion debate is the ACLU’s unspoken one: History suggests that society doesn’t care much about women, so maybe abortion rights will have more appeal if supporters invoke some other causes instead. And yet I can’t stomach it. Supposedly progressive groups like the ACLU are free riding on the work of centuries of feminist activism, all of it based on the implicit or explicit premise that there are two sexes, one that did the voting and property-owning and being president, and one that did the unpaid scut work and giving birth. The ACLU can afford to wipe away the word women only because everyone knows which half of the population needs abortions. Women will continue to exist, and to be disproportionately harmed by abortion bans—even if their existence becomes unspeakable.

AbortionACLUHelen LewisRuth Bader Ginsburg
Sign up to read this article

The Independent UK
Jay Ambrose: The abortion debate is really about love v. misery
It has been around for half a century, Roe v. Wade has, and besides this Supreme Court ruling facilitating something…

Tribune News Service
One subscription that gives you access to news from hundreds of sites
Abortion in Mississippi is already limited to a single clinic. If Roe v Wade falls, it could soon be outlawed entirely

The "Pink House" in Jackson has been fighting for safe, legal abortion for more than a decade. It's now at…