That other American tradition: after a mass shooting, the media comes to town

The day after the shooting at Robb elementary school in Uvalde, Texas, hundreds of town residents filled the bleachers of the county Fairplex Arena for a vigil. Also there were dozens of local, national and international reporters, ready to record up close a town mourning the loss of 19 children and two teachers gunned down inside their classroom.

Reporters were asked not to approach people in the bleachers during the vigil, but some residents still struggled to grieve amid the clicks of cameras. As two crying women held each other, a cameraman stepped in front of them to capture the moment. Looking disheartened, one woman shooed him away and shook her head.

It’s become another part of the terrible American tradition of gun violence. Media outlets from around the world send reporters to cover the horror left in the trail of a mass shooting. They fill up hotel rooms, make sometimes small and traumatized communities feel busier than ever and at times create traffic around memorial sites.

In Uvalde, a small Latino community of 16,000 in south-west Texas, residents welcomed the sudden surge of journalists as a sign of support, but were also utterly overwhelmed.

“Everybody wants to hear the story. This needs to be told, but it can be kind of overwhelming,” said Justin Hill, a Uvalde resident. “In a way it might be taking away from the grief.”

At every memorial in Uvalde, from the town square to the elementary school, there were cameras to capture the grief, the bereaved parents asking why police didn’t respond more quickly, the stories of the victims and a community grappling with an incomprehensible loss.

Journalists have done important work in Uvalde, forcing greater transparency from officials about what happened that day and why law enforcement didn’t intervene to stop the shooter sooner.

But teachers and family members of the victims say they have also been bombarded with phone calls from journalists and knocks at their doors. The constant questions about the fresh tragedy can be painful, residents say. On Thursday, a trail of cameras followed a grieving and emotional family as they left the site of a memorial. Local journalists have called for their media colleagues to allow families to grieve privately.

“I can’t talk,” the aunt of one victim said, as she looked on at the memorial cross for her 10-year-old niece, who family described as “full of love”.

Ravenn Vasquez was stopped for interview after interview as she stood outside the town square on Wednesday holding a sign that read “Uvalde strong”. “If it’s gonna be about politics, I probably will just ask not to be interviewed,” she said, exasperated, to one journalist, just before another reporter approached and asked if she would consider staying to talk for just a few more minutes.

“Some people said just give me a little bit of space, it’s not time yet. Everybody is as patient as they can be,” said PJ Talavera, a martial arts instructor who knew several of the victims. “Because I think everybody understands the magnitude and the gravity of the situation.”

In some cases, the scenes have echoed those following the shooting at Marjory Stoneman Douglas high school in Parkland, Florida, and in Sutherland Springs after a 2017 church shooting.

“At the prayer vigil Sunday night, mourners clutching candles hugged each other and sobbed. The pictures were beautiful,” Lauren McGaughy, a Dallas Morning News reporter, wrote at the time. “What you didn’t see was the scrum engulfing your friends and loved ones, photographers and reporters with iPhones jockeying to capture an image that didn’t also include the media melee.”

Still, in Uvalde, residents were grateful for the spotlight on their town, they said, the support they have received and the international outcry about what happened. But they wish this wasn’t the reason why the world knows Uvalde.

“It’s not just us mourning this, it’s the world and people need information,” Talavera said. “This is not just a tragedy for us, this is a world tragedy. This is all of us together, we’re in this together.” 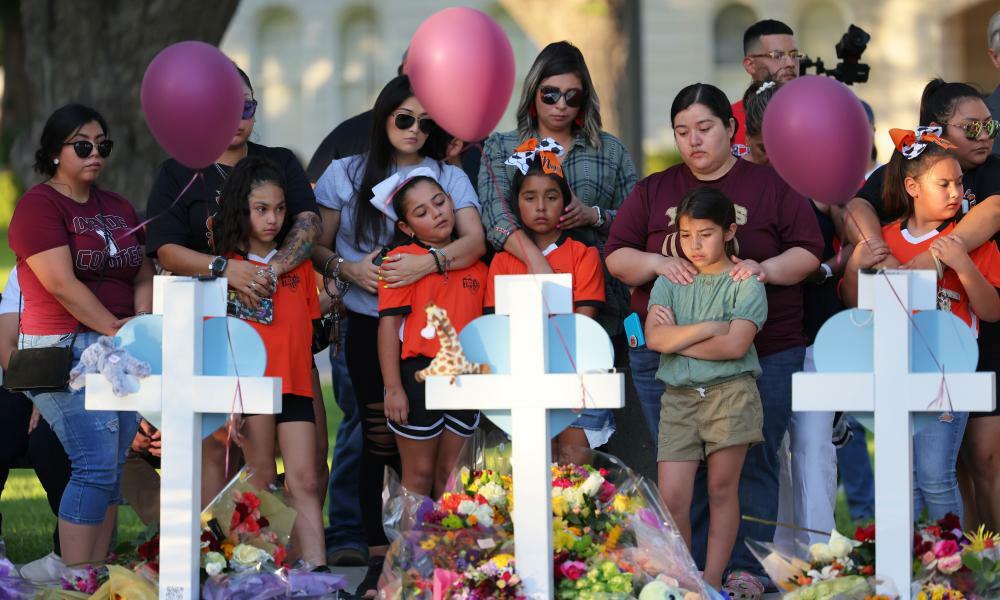 ‘These are innocent babies’: grief, loss and love as Uvalde struggles under a heavy cloud
The Texas school killings have touched nearly everyone in the small town, from friends and neighbors to shopkeepers and coaches

The Guardian - US
One subscription that gives you access to news from hundreds of sites
‘Evil will not win’: sorrow and disbelief as Uvalde mourns its children