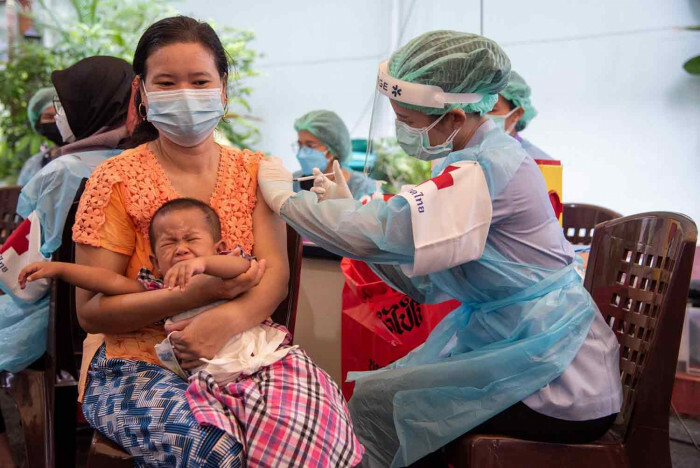 The Thai Red Cross Society kicked off a vaccination campaign on Tuesday for migrant workers, one of the country's most vulnerable groups that has been largely left behind in the broader Covid-19 inoculation rollout.

About 300 workers received their first doses along with a small number of undocumented refugees as part of a campaign due to run until the end of the month that is initially targeting 5,000 workers.

"The more migrant workers we're able to vaccinate, the better for the Thai people, too," said Tej Bunnag, secretary-general of the Thai Red Cross Society.

Official government data shows about 2.35 million migrants have permits to work in Thailand, but the International Organization for Migration estimates there are closer to 4 million to 5 million migrant workers.

Many live in cramped quarters in industries including construction, manufacturing and seafood industries. Their lack of access to health care has made getting vaccinations a challenge.

"We're so happy that we will be safe now... We all came in a big group because we're afraid to die," said Pesan, 35, who has lived in Thailand for more than 20 years.

"Finally there's someone who's lending us help," he said.

The government, which has not released vaccination data for migrant workers, earlier this year closed hundreds of construction sites and prevented workers from leaving their camps for a month following Covid-19 outbreaks in Bangkok.

The International Federation of Red Cross and Red Crescent Societies (IFRC) said the Thai Red Cross has set aside 10,000 of 100,000 doses of the Sinopharm vaccine donated by the Red Cross Society of China - enough to fully vaccinate 5,000 migrant workers.

The rest of the batch would be allocated to other vulnerable groups, including people with disabilities, IFRC told Reuters.

The Thai Red Cross said in July it had bought 1 million doses of Moderna's vaccine, which it planned to administer to medical personnel and vulnerable groups and sell to organisations around the country for general distribution.

That shipment has not yet arrived in the country.