Texas school shooting: All 21 victims were killed in one classroom after gunman barricaded himself in

State public safety official have confirmed that all those killed in Texas elementary school shooting were inside one classroom after the gunman barricaded them inside.

Lt Chris Olivarez, spokesperson for the Texas Department for Public Safety, told CNN that the 19 children between the ages of five and 11 and two adults who were murdered Tuesday at Robb Elementary School in Uvalde, Texas, were first blocked inside the same classroom by the teenage gunman.

“Just goes to show you the complete evil from this shooter,” Lt Olivarez told CNN’s John Berman and Shimon Prokupecz on Wednesday.

The gunman, who has been named as 18-year-old Salvador Ramos, was shot dead, apparently by police officers at the scene.

Two teachers were also killed in Tuesday’s attack. Eva Mireles, a 44-year-old teacher, has been identified by her family as one of the two adults killed and another teacher, Irma Garcia, has also been named by her family as a victim of the shooting.

Officers responding to the scene of the shooting were reportedly bashing-in windows of the school from the outside as they worked to evacuate students from inside the building.

Eventually, Lt Olivarez said, they were able to get inside the classroom where the gunman had locked fourth grade students and two teachers inside.

Lt Olivarez was pressed about whether law enforcement had been able to figure out if the school had been specifically targeted, but was unable to provide a clear answer, noting that there was “still a lot of unanswered questions”.

“We’re trying to determine that, that’s why we’re working with FBI right now to kind of look back to see if there were any indicators, any red flags, looking at social media,” he said, adding that what they do know about the shooter was that he was a resident of the area, he attended one of the nearby high schools and he had no criminal history.

On social media, a recent clip began surfacing in the immediate aftermath of Tuesday’s tragedy, which shows 18-year-old Ramos stalking the perimeter of the elementary school, rifle in full view.

The video was first posted to Facebook by a grandmother whose own grandchildren attend Robb Elementary School in Uvalde. Her daughter forwarded her the eerie footage and she then went onto share the haunting footage on the social media platform alongside the caption: “What my girls just sent me, this was at Robb,” wrote Elsa Ruiz. “Prayers for the kids and staff.”

The rifle, seen carried by Ramos in the grainy footage, has not yet been determined by investigators exactly what capacity or kind it was, Olivarez told CNN.

He can be seen in the video wearing a vest, which Olivarez confirmed while speaking with the news outlet was “a tactical vest carrier with no ballistic panels”, which he explained was typically only used by tactical team, such as SWAT teams.

“They can place magazines, extra ammunition inside those carriers and be able to move in a tactical formation,” he said.

Tuesday’s shooting is the deadliest in a US primary school in almost a decade, since the 2012 Sandy Hook shooting in Newtown, Connecticut, in which 20 children and six adults were killed.

The massacre has rocked the small town of Uvalde, which hosts around 16,000 residents situated 130km (80 miles) west of San Antonio. 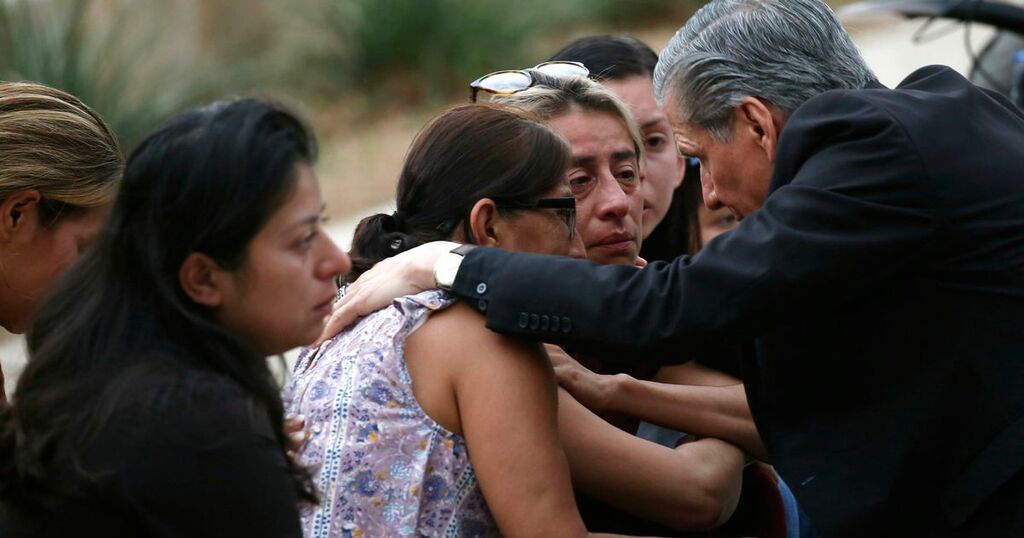 The shooting victims were killed in the same classroom.