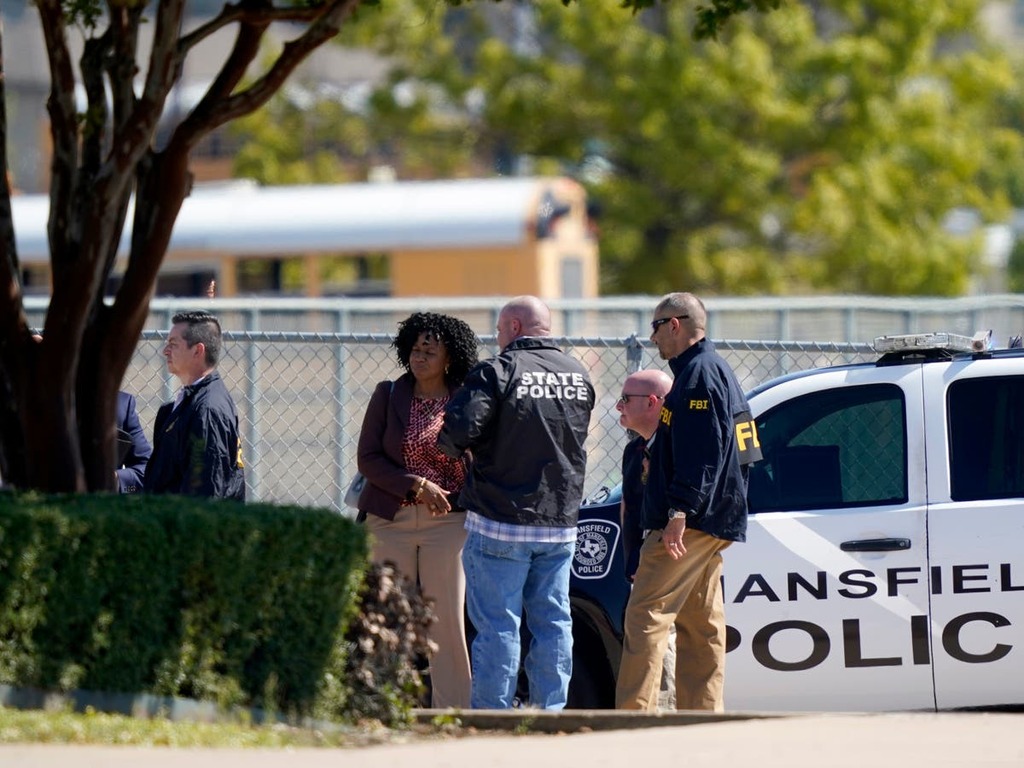 The 18-year-old suspect who opened fire at a high school in Arlington, Texas, was granted bail and ordered to stay away from the institution as well from those who were injured in the incident, his attorney said on Thursday.

“There are numerous school shootings that have occurred across this country which are tragic. All school shootings are tragic. However, in this situation, this was not someone who was just out to go and shoot a school and had made up their mind [and said] ‘You know hey I’m upset and I’m just going to shoot anyone I see’,” Ms Cole told the media.

“I request the media correct their narrative with regard to what happened, and that you all respect the family’s privacy,” she said, as Mr Simpkins was escorted from the jailhouse by two relatives.

“There’s a distinction between a mass shooting and a school shooting – these are people who are out to shoot multiple people and that’s not what happened.”

Several social media videos of the incident showed students running for cover, after a fight broke out and a student opened fire inside a classroom at the Timberview High School, injuring four people.

Mr Simpkins, identified as the suspect, had fled the scene, but was taken into custody hours later. He will now be under house arrest, according to local news channel WFAA. He will also submit to drug and alcohol testing and wear a GPS monitoring device.

The court ordered Mr Simpkins, charged with three counts of aggravated assault with a deadly weapon, to stay away from the school and the people who were injured in the shooting.

Mr Simpkins’s family had earlier said he was a target of bullying and also claimed he acted after being robbed and attacked by bullies.

Mr Simpkins was painted as a “menace to our society and nothing could be further from the truth,” said a lengthy Facebook post made on Thursday by an unnamed Simpkins family spokesperson. The comments were attributed to Mr Simpkins’s mother and grandmother, reported local newspaper Fort-Worth Star Telegram.

“He has never been known to bother anyone and would do anything to help someone in need.”

“From the beginning of this school year, Timothy has been bullied at school. He has been beaten, taunted, and harassed on a daily basis. Recently he was ambushed by a group of young males outside of school, stripped of his clothing in front of a crowd of onlookers, and robbed of his money and possessions. He has been humiliated and stripped of his dignity on more than one occasion which led to him being fearful to go to school or even leave our home without an adult,” the post further said.

It laid out Mr Simpkins’s early childhood, claiming he had “became depressed and some days did not even want to get out of bed. I am certain that he was fearful for his safety and felt that he had no support from those in authority whose responsibility it was to protect him.”

Mr Simpkins’s father was “brutally beaten to death” and that this “definitely heightened Timothy’s fear for his life.”

“Many of you have seen the video of the brutal beating Timothy received – he never even returned a blow – he simply balled up and covered his head,” the post said. The alleged bullying he faced were brought to school’s attention, but no action was taken, the Facebook post said.

“Not to mention that the young men responsible for beating and harassing him recently made threats to kill him so you see, my son was terrified and believed he would be murdered just like his father.”

Meanwhile, Mansfield school district associate superintendent of communications Donald Williams told local media that it was not ascertained yet if bullying could be cited as a reason for the shooting and said investigations into the incident will continue.

The “entire situation will be assessed and evaluated and for us as a district. We’re always looking at ways in which we can improve and get better. We have law enforcement officers on every single one of our campuses, I think that’s important for the community to know,” he said.

Mr Williams added that the students involved in the incident “will be dealt with in accordance to our Student Code of Conduct, and that’s the way that whole process is handled.”