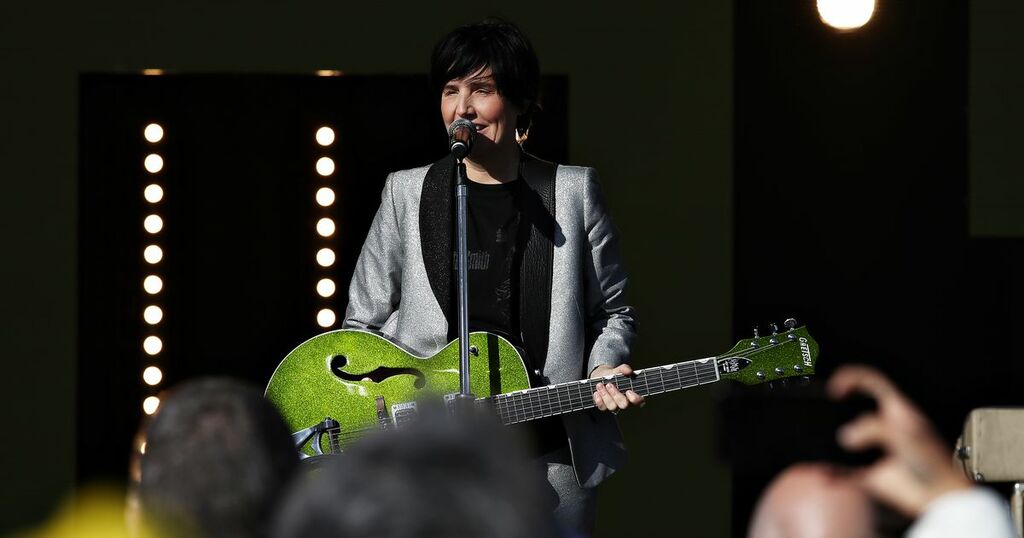 The past 18-months have been full of surprises and the surprises just keep coming, the latest in the form of a new song by Texas and George Bowie.

The Glasgow icons have come together on the remix of 'Mr Haze', the first track off Texas’ new album, and the result is an undeniable banger.

Despite knowing each other for a 'long, long time’, this song is the first time George and front woman Sharleen Spiteri have made music together, and now with the single featuring a little bit of Donna Summer and now a whole load of GBX, it could be an anthem to welcome us back to the clubs.

George explains: “She was one of the first people I interviewed when I started here, we were both starting out in our careers.

“I've probably interviewed Sharleen more than anyone else, we’ve spoken many times. I’ve always been a big fan of Texas and when I heard 'Mr Haze' it had that kind of dance feel to it and we’d just done ‘Yes Sir, I Can Boogie’ and that was doing really well. I thought we could do something like that. I got together with Paul Keenan who I did ‘Boogie’ with and we came up with some ideas. We sent it back and forth for a while and put the newer version together and we sent it to Sharleen to see what she thought.”

“I’ve always been a fan of Texas, I’d heard the remix of Summer Son when I was in Ibiza and thought I’d love to do a remix with Sharleen’s voice on it at some point and that seemed like the ideal opportunity to go for it. It’s amazing that Texas can do the rocky stuff, the soulful stuff - they’re such a diverse band.”

The Texas frontwoman adds: “He’d done a magnificent job. Honest to god I just love it. I sent George a very short message back that just said ‘this is bleep brilliant’ and that was it.

“It makes you just feel so happy and makes you want to get up and dance and throw off any anxieties. You know when something makes you feel good, that’s what this does.”

'Mr Haze' was one of the singles unlocked from the Texas vault during the creation of their anniversary record, 'Hi'.

Sharleen explains: “It was a song that was unfinished so Johnny and I got hold of it and wrote a chorus and added some extra bits, changed some bits then added the Donna Summer sample. What we thought was going to be a bonus track on an anniversary record, ended up turning into the new Texas album.”

The pair might have differing musical offerings, but have nothing but admiration for the others' work and hope to even attract some new listeners with the single.

While Texas is known for their pop-rock anthems like 'Say What You Want' and 'Black Eyed Boy', George aka GBX is known for his dance anthems that have filled dancefloors across the city for decades.

Sharleen says: “George takes something and takes it to a different place, he experiments with it. You’ve got to have musicianship in you to be able to do that which quite clearly George has got. It’s not always the case with everybody that's on the radio.

“He’s really taken this (Mr Haze) to another level. When I got the mix back, it made my heart soar and when you hear it you realise how good he is at what he does.”

And while the song hasn’t been released yet - not until September 22 - George says it’s already getting an impressive reaction from the crowds.

With so many bangers in his arsenal, it’s any wonder the DJ has any time to play new records but the buzz of playing his new work is what keeps him going.

He explains: “It’s frustrating that we haven’t been able to play the songs because the clubs have been shut and but now things are reopening, it's really nice going out and getting the reaction and that song in particular is smashing it right now.

“If I go to a gig, I want to hear all the big songs, all my favourites but when I’m DJing, I play the new songs but I also play the hits.

“I know when I go do a gig I'm looking at it from a clubber point of view, they’re coming because they want to hear all of the big songs I'm known for playing. But you want to get a few new ones in there so you’re not going stale and doing the same songs all the time.”

“What’s great about what George does is he’s introducing a new audience”, Sharleen adds.

“Most of his audience is not people who will know the original of Yes Sir, I Can Boogie but there will be something at the back of their head that will know it, those classics will always keep coming back. You’ve just introduced a whole new audience. There will be some kids out there that won’t have heard Texas but now they will because they’ve got into the mix through George.”

Both George and Sharleen are making the most of live music being back and are already out gigging.

While George has been performing at Glasgow venues like SWG3 and set to play a predictably 'mental' gig with Scooter, Texas are set to embark on a Scottish tour that will include the Oran Mor.

Sharleen says: "We’re super excited to be back on the stage again. We did one festival, and then we’ve got our acoustic tour then in February we’ve got a show in Dundee. It’s weird, not weird going out on tour or standing on the stage, it’s that thing of your automatic showmanship is built-in and your go-to is get up and entice an audience and previously you were trying to manage a certain amount of calmness.

"It's really nice that things are getting back to normal. Even just hearing all the chat happening at the pubs when you walk down the street.

George adds: "We appreciate it more now. Sometimes you take it for granted when you’re gigging a lot but now it’s like 'yass I’m gigging again - normality'.

"It was a moment while it lasted but it’s back to normality now, it’s great to get out."

The 'Mr Haze' remix will be available to listen to from September 22 and Hi, Texas' new album is out now.