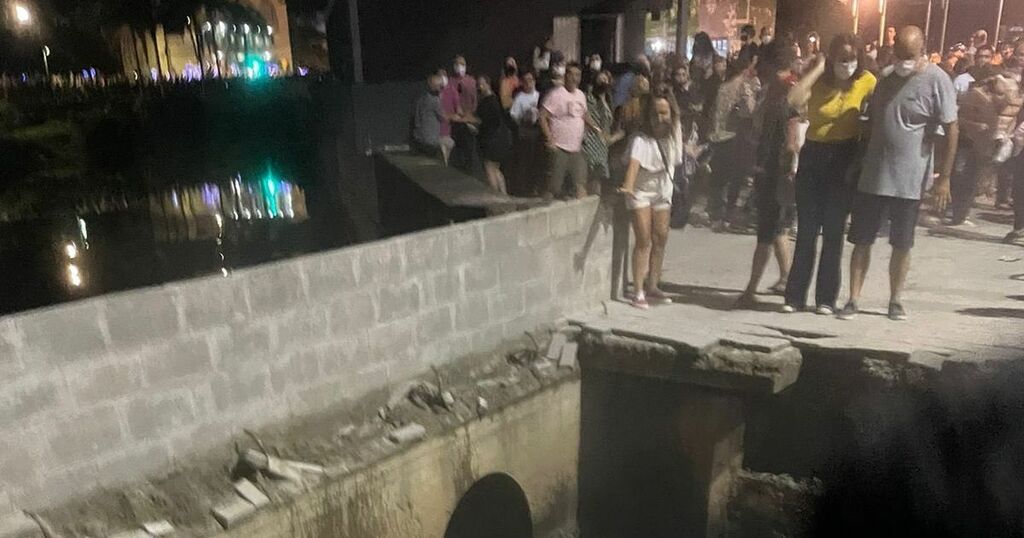 Christmas revellers were filmed tumbled into a river after a pavement suddenly collapsed from beneath them.

A paved walkway over a river had fallen through under the weight of the crowd.

The incident happened during the opening of the Natal Cultural, a traditional event in the city.

Video from the scene shows people wearing Father Christmas hats running in a panic towards the crater before helping people out onto the road.

The hole appears to be four or five metres across, several metres wide and at least two metres deep.

Eleven children were rushed to Joinville Children's Hospital for treatment for cuts and bruises, 7 Minutos reported.

Firefighters said they took one child to hospital with traumatic brain injuries, but this has not been confirmed.

Technicians from the Civil Defense and the Infrastructure Department carried out an inspection of the site, but were unable to work out why the pavement gave way.

Three ambulances and 16 fire fighters were rushed to the scene and helped at least 30 people out of the hole.

Ricardo Korb, who lives in Joinville, . “Fathers, mothers with children in their arms fell. It was about 2 meters high and stopped on the river's mud”.

Witness Cristiane Sampaio added: “Just as we were watching the countdown, there was a noise.

"In that, we saw that the ground gave way and many children and women who were inside were being pulled by people”.

The Christmas event continued after 40 minutes, as fire fighters continued to look for the wounded.

“The ceremony was only resumed after all victims had been attended to and the city hall received the information that there was no person in serious condition,” said the city hall.