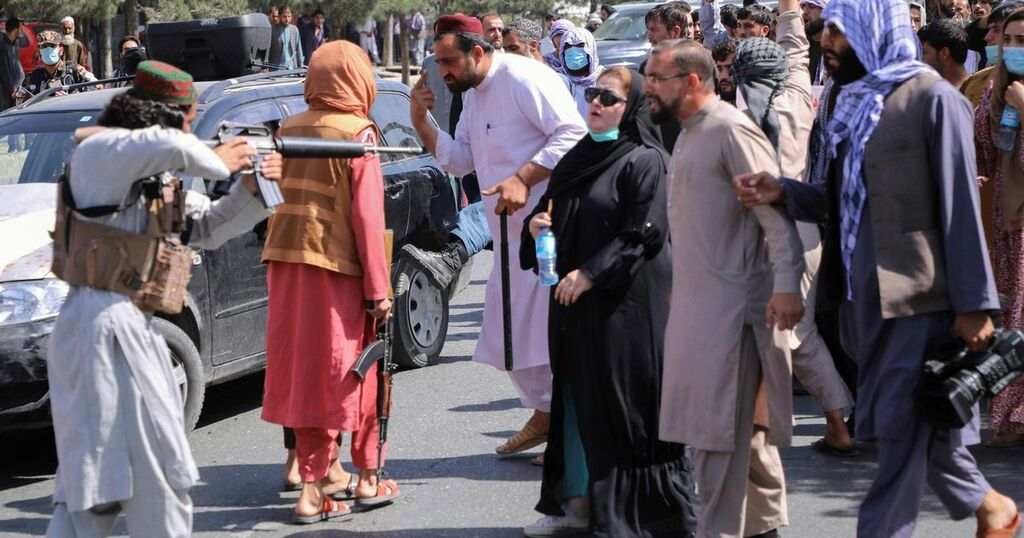 A powerful image has emerged showing the moment an Afghan woman bravely stared down the barrel of a Taliban militant's gun.

The terrifying moment happened as protests erupted on the streets of Kabul with the militants launching a brutal crackdown on women freedoms.

The image, which was shared online, shows a woman holding a bottle of water as an armed Taliban fighter squares up to her in a stand-off.

He is holding his weapon up and pointing it squarely at her as bystanders appear to rally around.

The woman's identity has not been confirmed nor what happened after the image was taken.

The shocking scene was said to have taken place on Tuesday during an anti-Pakistan protest near the Pakistan embassy.

Many on social media went on to praise the unnamed woman's courage faced with the armed fighter who is representing a regime that is cracking down on past freedoms.

It comes as a senior UN official said on Wednesday that there had been 'daily reports' of curbs on the rights of women.

Alison Davidian, deputy head of UN Women in Afghanistan, said some women were being prevented from leaving home without a male relative and women in some provinces were forced to stop work.

Protection centres for women fleeing violence had also been targeted and safe houses for rights activists were said to be at full capacity.

"The lack of clarity of the Taliban's position on women's rights has generated incredible fear. And this fear is palpable across the country," she said.

"Memories are vivid of the Taliban's rule in the 1990s, when there were severe restrictions on women's rights, and women and girls are understandably afraid," she added.

Taliban leaders have vowed to respect women's rights in accordance with sharia, or Islamic law.

But under Taliban rule from 1996 to 2001, women could not work and girls were banned from school.

Women had to cover their faces and be accompanied by a male relative when they left home.

In an interview with Australia's SBS News, a senior Taliban official said women would not be allowed to play cricket - a popular sport in Afghanistan - or possibly any other sport because it was "not necessary" and their bodies might be exposed.

The Islamist movement, which seized power last month, announced a new government on Tuesday that does not include any women.

In Kabul, dozens of women took to the streets again to demand representation and for their rights to be protected.

"With the announcement yesterday, the Taliban missed a critical opportunity to show the world that it is truly building an inclusive and prosperous society," the UN official said.