Terminally ill woman gets to say last goodbye to her animals 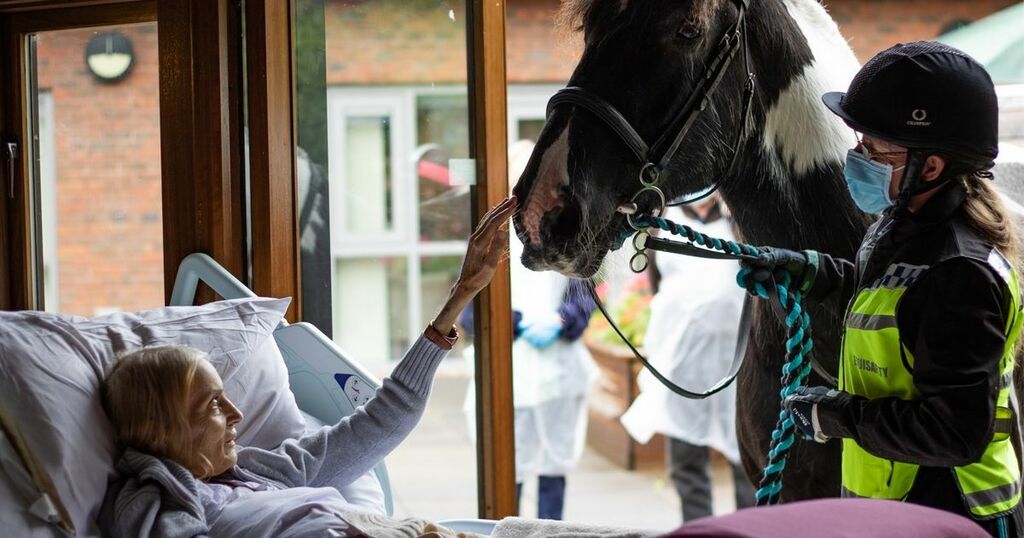 Staff at a hospice arranged for a terminally ill woman to say goodbye to her beloved animals.

Jan Holman, 68, is a patient at the Hospice of the Good Shepherd in Chester.

READ MORE: Man's sudden death a week after moving into his new home

Jan was admitted to hospital unexpectedly six weeks ago after a consultant's appointment and hadn’t had a chance to say goodbye to her dogs or Bob, her horse of 10 years.

For the first four weeks at the hospital, Jan was unable to have any visitors due to the pandemic, and her husband of 46 years, Dennis, said she found having no visitors or personal contact difficult.

He was only allowed to go the main entrance to drop things off and was unable to enter the building at all.

After four weeks, Jan was moved to the hospice to receive end-of-life care.

Knowing Jan was also missing her animals desperately, the hospice arranged for a visit from her two Cavalier King Charles Spaniels Monty and Rowley along with Bob.

Even though she was unable to get out of bed, Jan was excited to have the chance to see Bob one more time.

The nurses wheeled her bed to the patio doors and the team from Thornleigh Park Farm Stables, where Bob is being kept, walked him into the hospice courtyard.

Jan's face lit up as Bob put his head through the doors and nuzzled her neck and lap in an incredibly emotional reunion.

Jan’s husband Dennis said: “It was just such a relief once Jan was moved from the hospital to the hospice in Chester and we were able to have named visitors who could come and see Jan regularly, however we never imagined that we would be able to include our dogs Monty and Rowley and Jan’s horse Bob on the visiting list.”

He continued: “All the staff here have been wonderful. Jan has been so well cared for, nothing is too much trouble even down to the chef coming every day to see what he can tempt Jan to eat.

"Nothing is too much trouble, including arranging for a horse to visit!”

Before her illness Jan, who has lived in Chester all of her life, could be seen dressed as Chester's Tudor Lady delivering tours of the city where she has been a Blue Badge Tour Guide for 37 years.

Jan said: “I just can’t believe what the staff here at the hospice have done for me. Until a few weeks ago I was still riding Bob every day and he is such an important part of my life, and I have missed him so much.

"I knew that arranging for my dogs to visit was possible as we had a neighbour who was a patient at the hospice a few years ago and we were allowed to bring the dogs to visit her, but I just didn’t expect that they would ever be able to give me the chance to see Bob one more time.”

Louise Saville King, deputy ward manager at the hospice, said: “It was obvious when Jan first came to us that she is passionate about her animals and that horses have played a large part in her life for many years.

"We felt it was really important to try and arrange for Bob to visit Jan.

"The ethos of hospice care is not just about caring for the clinical needs of our patients but also looking after their emotional and spiritual needs as well.

"It’s about making a difference to our patients and their families in whatever way we can.”

She added: “We know that sometimes people are scared at the thought of coming to the hospice, but it’s a positive place where people are supported and well cared for.

"The work of the hospice really does make a difference to people’s lives.“