Tennis: Emma Raducanu is on course to become the wealthiest female athlete in British sporting history 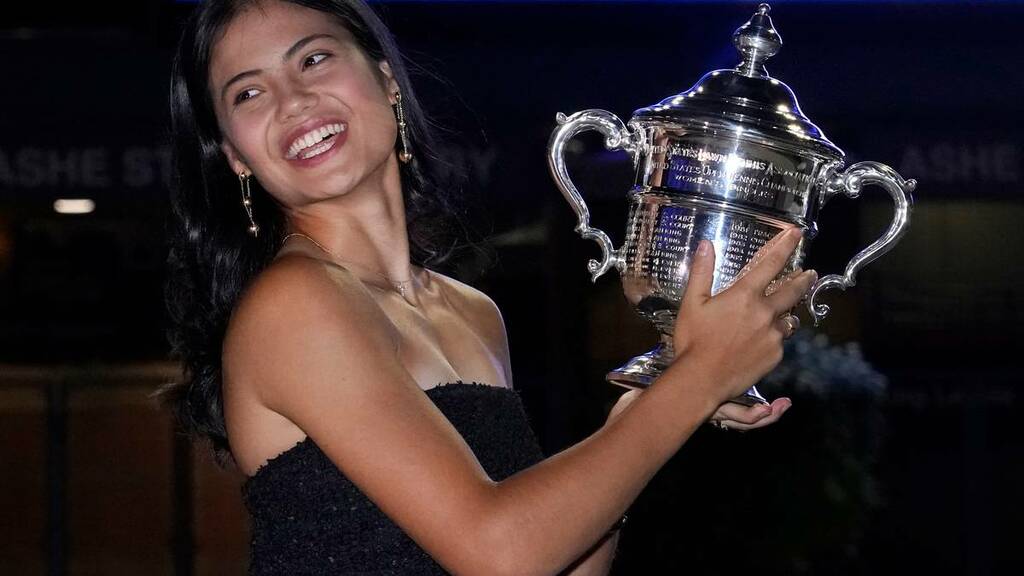 It has taken a mere handful of tennis matches for Emma Raducanu to transform herself from complete unknown to global superstar. She will wake up in New York today as the new queen of the tennis court, embarking on a series of United States network interviews that will further catapult her to fame and fortune.

At the age of just 18, Raducanu has lifted the mood of an entire nation, which is not bad for a teenager who, only a few months ago, was sitting her A-levels.

In winning the US Open, Raducanu is on course to become the wealthiest female athlete in British sporting history. She can do the maths, too, having achieved an A* in the subject. The victory earned her US$2.5 million (NZ$3.5 million) in prize money while her beaming, photogenic smile will attract a slew of endorsements to add to lucrative deals already signed with Nike and the racketmaker Wilson. One brand manager suggested she could earn £20 million (NZ$39m) over the next two years and that £100 million (NZ$195m) in a lifetime was not an exaggeration.

"It may well go beyond that," said Marcel Knobil, founder of Superbrands and the Brand Council consultancy.

In the history of sport, no rise to the top has been so rapid. She played four matches at Wimbledon and 10 at the US Open (including three in qualifying for the main tournament) and that's about it.

An MBE, according to sources, is guaranteed although the honour's committee will resist calls made on the internet on Sunday to grant her a damehood for the kind of startling victory that transformed Andy Murray into a knight of the realm. Sports Personality of the Year is a shoo-in.

Hours after Raducanu had won the championship, she found time to send a message to her fans in China in fluent Mandarin. "Hi, everyone," she said in the video posting. "I want to say thank you to you guys and I hope you could enjoy my tennis. I'm thrilled to win. Love you all."

As every marketing man knows, there are untapped riches to be made in China and Raducanu's mother Renee – full name Dong Mei Zhai – just happens to have grown up in Shenyang, a city in north-east China.

Overnight, the number of Raducanu's followers on Instagram more than doubled to 1.3m. Raducanu seemed utterly perplexed as if such a following was impossible for a teenager from Bromley.

Raducanu had tried to resist the hype as her improbable run to the final had gathered momentum. She had "no idea" the match against Leylah Fernandez won in straight sets was being shown in the UK live on Channel 4 (9.2 million viewers tuned in with many more streaming it on Amazon Prime), having shut herself off from the wider world.

"I just completely switched off from everything, gave my phone away. I haven't had a chance to catch up. I haven't checked my phone yet."

Prior to July and her run at Wimbledon, when given a wild card, she reached the fourth round before being forced to retire with breathing difficulties, nobody knew anything about Emma Raducanu. Now everyone is aware that she was born in Canada before moving to the UK at the age of two. Her father Ian, who works in finance, is Romanian but had emigrated to Toronto where he met Renee prior to the move to Bromley. Raducanu is an only child, educated at Newstead Wood School, a grammar school in nearby Orpington, where former pupils include the world champion sprinter Dina Asher-Smith.

The school has "churned out a lot of good athletes", said Raducanu on Sunday, heaping praise on the institution for giving her the "flexibility" to study and play tennis.

Her friends helped out, too. Celine Aboagye, 18, told the Telegraph on Sunday she would type up notes for her classmate to give her more time on court. "From the first day I met her, she had that level of dedication," said Ms Aboagye, "From Year 9 or 10, I would collect as much work as I could for her. I would type notes for her to make sure she is caught up."

But it is hard to look beyond Raducanu's parents for the inspiration and drive that has launched her into the sporting stratosphere. She has repeatedly attributed her tenacity to her mother. Her father is described as softly spoken and approachable, who was happy to try a variety of coaches, and is even said to have wanted a different one for each shot in the tennis player's armoury.

Raducanu's mother, meanwhile, is often too nervous to watch her play. At Wimbledon, both parents, intensely private, sat among the crowd rather than have the spotlight turned on them in the players' box. They couldn't get to the US because of Covid travel restrictions imposed on entry.

Raducanu has been a regular traveller to both Romania, where she has enjoyed her grandmother's cooking in Bucharest, and to Shenyang where she played with the local table tennis club to improve her shot reaction speed.

Anybody witnessing her various press conferences and post-match interviews will see a young woman, missing her parents but also pleased she had done them proud. "We don't really talk so much about tennis," Raducanu said on Sunday.

"They just really want to know how I am in these moments. I would have loved them to be here and we can all celebrate together or they could be with me and experience the same things but you know, they're watching from home very proud.

"My dad said to me 'you're even better than your dad thought', so that was reassuring. My dad's definitely very tough to please but I managed to today."

But Raducanu has done much more than just please her folks. She's sent an entire country into rapture.