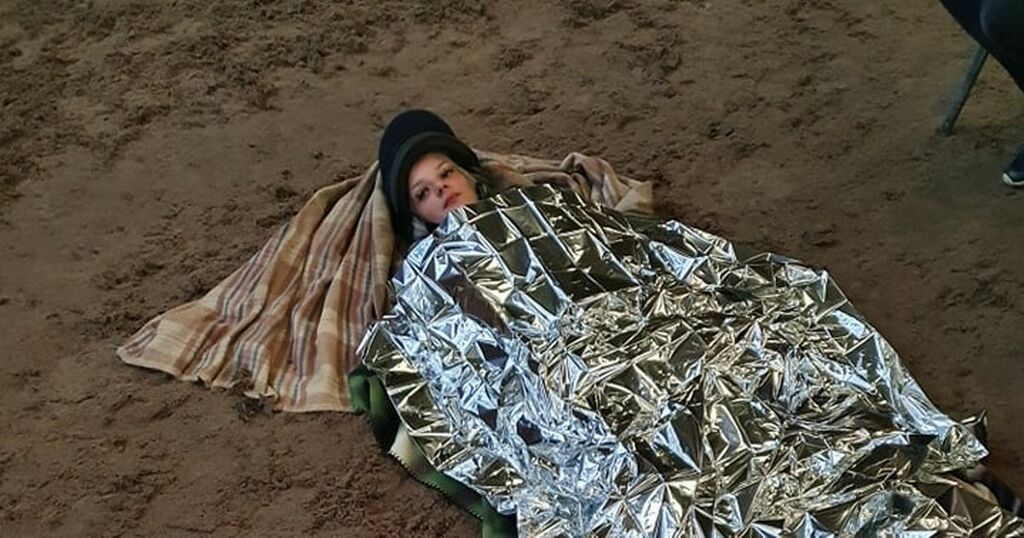 A teenager was forced to wait in "agony" for nine hours for an ambulance after she fell off a horse.

Amy Wells, from Caldicot, fell off a horse during a course at Coleg Gwent's Equestrian Centre in Usk at around 10am on Wednesday, September 8.

Staff at the site laid 16-year-old Amy down on the ground following the incident as she was complaining of intense pain on the left side of her back and an ambulance was called. Helen Knowles, Amy's mother, was at home when the incident happened and rushed to be with her daughter.

Read more: The shocking scenes at a Welsh hospital where ambulances are piled up and patients say they are waiting up to 18 hours to be seen

"I said to them I was on my way so my husband Andy and I made our way there to find her on the floor of the arena," she told said.

"The arena had only been watered the night before because you have to do that for the horses' joints.

"From what I can gather the horse just got a bit of excited and took off and she 'came out the side door' as she'd say.

"She's not new to that, she's come off quite a few times, but she just couldn't save the fall."

Helen said Amy landed on her left side and tried to get back up but was unable to so the college laid her down on the floor to keep her in the same position and called an ambulance. Helen said her heart "sunk when [she] got the phone call."

"Amy is such a capable rider that I knew if she doesn't get back up she's hurt. I knew I had to get to my daughter quick."

When she arrived Helen said her daughter told her she was "in agony". She said she and the college rang emergency services "more than 10 times" but she was unable to get an update on when an ambulance would come or even whether there was one on the way.

"I asked if there was a number I could ring to see when there's a possibility of an ambulance. I just wanted to know that somebody was coming. They actually said they had no contact to the ambulances or to see if anybody was on their way.

"It was absolutely awful. My husband was that desperate that he went down onto the main road. There were ambulances and police cars passing and he was ready to jump out in front of somebody just to get her help. He was just desperate – he knew how much pain she was in.

"I asked and asked and they said they'd try and get somebody there as soon as they can but they just didn't have anybody. Not even a first aid car.

"My daughter is so tiny and I just wanted to get a board from somewhere, scoop her up, put her in our truck, and get her to a hospital.

"It was very heart-wrenching. I was numb. I just can't describe the heartache of seeing your child in that position."

Helen said an ambulance eventually arrived at around 7pm – around nine hours after services had been called. She said the ambulance workers were "amazing" and claimed even they were "shocked" at the length of the wait.

Amy was taken to University Hospital of Wales in Cardiff where scans showed she had sustained bruising to her back, elbow, and shoulder and a slight laceration to her spleen.

Initially she was told she may require surgery but eventually was told it wouldn't be necessary. However she is now unable to do any strenuous activity, including horse riding, for at least four months.

"They said they don't think they need to operate at that time – as long as she rests it should heal itself," said Helen. "If it was any worse she would have had to have had an operation and been on medication for the rest of her life."

Helen said Amy already suffers from duplex kidney, a medical condition where a child is born with a double kidney on one side, meaning she is more susceptible to infections.

"She'd more susceptible than you or I in terms of picking up infection quite quick. So if her spleen had been damaged any more that would have put her rate of catching infection up even more."

She added that Amy was "very sore" and in low spirits since the incident. "She gets phone calls from the college every day and they lift her spirits up. I have to help her with her care because she's so sore. But she's very depressed because she can't do anything except lie down, sit on the sofa with the dog, and watch a bit of TV. That's all she is capable of or that we'll let her do.

"She and her horse Harley have been training and training this year for the shows and sadly she's now not able to do any of that.

"When you do something every day since you were three years old it's a bit of a shock to her system. We don't normally have to care for Amy's horses – she has so much knowledge already and cares for all of them herself.

"She's keen to return to college but unfortunately half of the course was riding. But I think the college are going to do their best they can to make sure they put things in place so she can do it without the riding part.

"Amy's got quite a big sense of humour and that's what'll get her through it I think. It hasn't put her off."

Helen said Coleg Gwent were "outstanding all the way through" and that staff did "everything they could" following the incident to keep her warm and comfortable. But she said more resources were needed in health services so that nobody had to wait so long for an ambulance in the future.

"It's not okay. She's still a child and she needed help. I don't blame the ambulance services themselves – I know they're stretched. But why are people waiting this long? Why haven't they put in extra resources to try and fix this problem?

"It just doesn't make sense. I don't want this to happen to any other child. I know people are ill every day but I think they need to look into the situation if the NHS are struggling that badly. I will be putting in a formal complaint."

Alison Woodyatt, Welsh Ambulance Service locality manager for north Aneurin Bevan, said: "At the time of this incident we were in a period of very high demand and faced with several ‘red’ calls (our highest priority) combined with resources being delayed in handing patients over to hospitals in the area.

"We apologise sincerely for the distress this delay would have caused and thank those who supported Amy in this situation.

"We would welcome contact from the family should they wish to discuss our response further and wish Amy all the best for a full and speedy recovery."

To get the latest news from WalesOnline sent straight to your email inbox click here .