Teen titans Fernandez, Raducanu on brink of US Open final 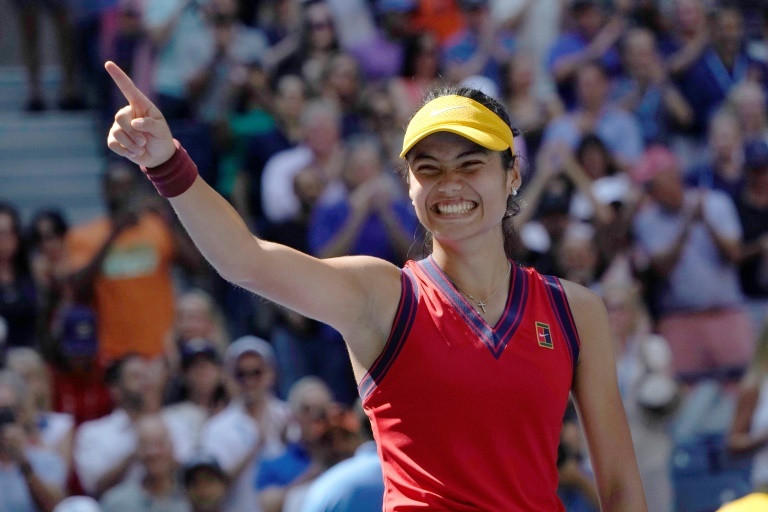 New York (AFP) - Teen powerhouses Leylah Fernandez and Emma Raducanu are each one victory from reaching their first Grand Slam final at the US Open, displaying the next generation's formidable talent.

Raducanu, a British 18-year-old who became the first US Open qualifier to reach the last four, and Fernandez, a Canadian who ousted Naomi Osaka and Angelique Kerber before turning 19 on Monday, have starring roles in Thursday's women's semi-finals at Arthur Ashe Stadium.

"I think we all have equal chances of winning the semifinals and then winning the title," Sakkari said."We are all for a reason here.We're all playing well."

One of the four will capture her first Grand Slam title in Saturday's final, which could be an electrifying prodigy battle.

"I've known Leylah since we were juniors, in Under-12s," Raducanu said."We played Orange Bowl and all of those tournaments.I played her in Junior Wimbledon, actually.

"The fact we're both in the semifinals of the US Open after having played each other from the early days, it's very cool to see just how far we have come.She's a really cool person."

Serena Williams, a 23-time Grand Slam champion who turns 40 later this month, won her first major title at the 1999 US Open at age 17, three years before Raducanu or Fernandez were born.

Raducanu, only the fourth qualifier in the semis at any Slam, could become the first qualifier to reach a Grand Slam final.

"We're all just super hungry to make a difference in the tennis world," said Fernandez."I'm just glad we're doing such great jobs and doing just that.

"We want to make an impact.This tournament just proves how well we're adapting to everything."

Tokyo Olympic champion Belinda Bencic, beaten by Raducanu in a quarter-final, hopes the rising stars will receive a nurturing environment to develop.

"It's great for tennis.It's obviously great stories," she said."I just really hope that everyone will protect them and will hope the best for them and not try to put so much pressure and so much hype around them so it just gets too much...so they can just develop in peace also a little bit."

Sabalenka, 23, is looking forward to facing crowd darling Fernandez, whose poise under pressure and powerful shotmaking have produced shock upsets.

"She's playing well, moving well.I would say it's nothing to lose for her," Sabalenka said."She's a great player.She's fighting for every point.The crowd are there and they are supporting her really loud.

"It will be interesting one.Really looking forward for this match."

Sabalenka hopes for a breakthrough title of her own in her 16th Slam start.

"Hopefully I can keep it up," she said."I'm really proud of myself.I'm here in the semifinal and I have another chance to show my best."

'Being young and free'

Raducanu, who handed out cupcakes in the locker room to celebrate her birthday, has not dropped a set at the Open.

Raducanu became the youngest US Open women's semi-finalist since Maria Sharapova in 2005.

"To have so many young players here doing so well, it shows how strong the next generation is," Raducanu said.

"There's definitely an element of being young and free -- there's a quality to that, being free swinging and loose."

"I beat some really good players.My tennis looks in a good place right now," Sakkari said."I'm at the best age of my career."