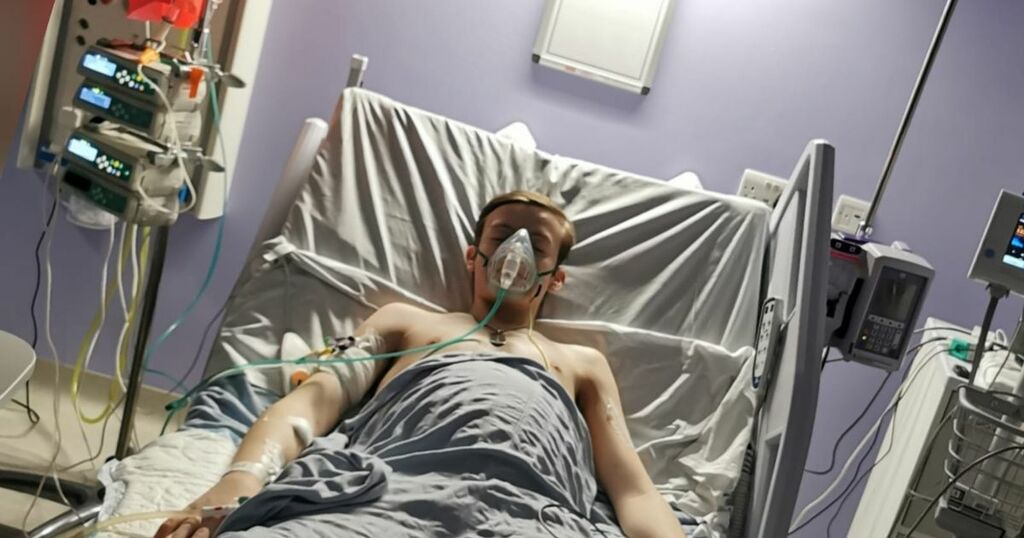 A fit and healthy teenager said he was left "looking nine-months pregnant" after going to the doctors with stomach cramps.

Kyle Smith was devastated when an ultrasound and CT scan revealed he had a 15cm by 15cm cancerous tumour in his abdomen.

The 18-year-old was diagnosed with Ewing Sarcoma, a cancer that mainly affects children and young adults, and was put on an intensive course of chemotherapy.

Kyle, a keen basketball player, from Litherland, Merseryside, said: "I laughed at the diagnosis, I didn't believe it was cancer.

"I went from having a six-pack to looking nine-months pregnant.

"If I'd have left it any longer I might not have had the treatment options."

Kyle is currently receiving chemotherapy at Clatterbridge Cancer Centre, with the aim of stopping the tumour from spreading and hopefully shrink it before surgery later this year.

He told the Liverpool Echo the support of his mum and girlfriend have been crucial in helping stay positive throughout, especially in dealing with the "brutal" chemotherapy that leaves him exhausted.

He said: "The emotions you go through - denial, regret.

"It just makes you appreciate the little things in life and how you can take them for granted compared to someone my age partying and going out and you're just thinking that's not my life anymore."

Wanting to spread awareness of cancer in young people, Kyle encouraged others to not be put off seeking medical advice despite the difficulties accessing services during pandemic.

He said: "No matter how old you are, you're entitled to some answers. Especially during Covid, I know a lot of people have been passed off haven't been able to get the help they need."

He added: "I don't know what the future holds for me right now.

"People go off, set plans of what they're going to do, and in three months my life changed from going to college to being in a hospital. It's overwhelming.

"It's only now I'm starting to accept I have cancer but at least I'm getting treatment for it. It could have been a lot worse."

Advice and support for anyone suffering from Ewing Sarcoma can be found at Sarcoma UK.