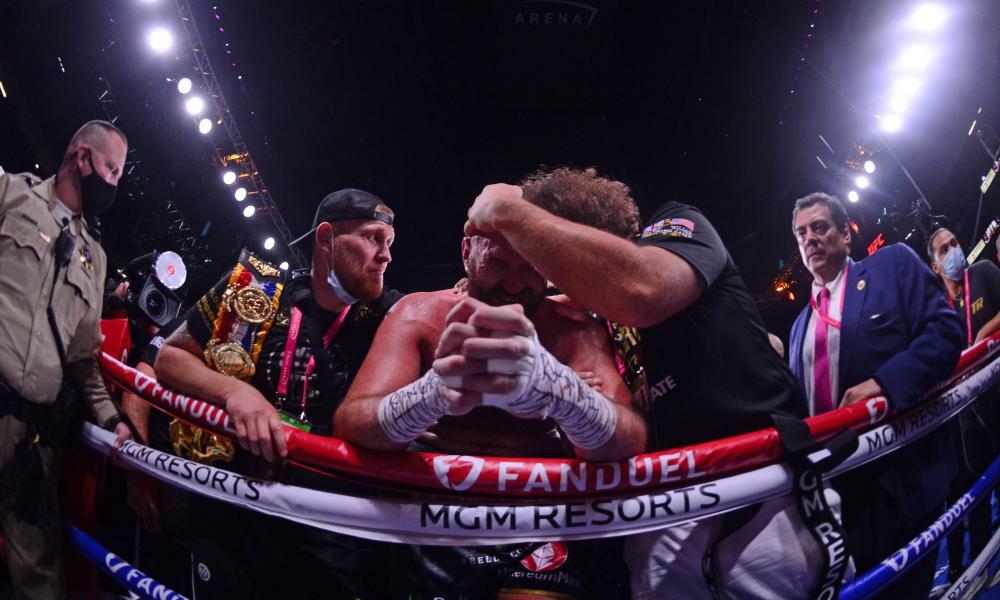 After one of the great fights in heavyweight history was all over, Tyson Fury lent over the ropes and said a silent prayer. The world champion had just knocked out Deontay Wilder in the 11th round of a tumultuous contest and his arms pressed down on the ropes as he bowed his 6ft 9in frame in relief and gratitude. Fury’s gloves were off but his hands were still covered in their sweat-sodden wraps. He laced his fingers together in a familiar old ritual for the victorious Gypsy King.

As he prayed, Fury also cried. His brother Shane, a big shaggy bear of a man, covered the champion’s bald head with his hand. It was a gentle and comforting gesture which confirmed how clearly he understood that his big brother had come through some dark and testing moments before Fury again dominated Wilder. The American had shown immense bravery and, at least until the final round, he kept trying to unleash one last shattering punch to rescue himself from defeat. The fact that he had come close to stopping Fury in the fourth round, when the champion went down heavily twice, drove on Wilder until all his valiant resistance was eventually beaten out of him.

Tim Allcock, Fury’s close friend who runs their camp with Shane, completed the picture in the winning corner. He stood to the right of Fury, his hand on the champion’s arm, as the prayer continued amid the falling tears. Fury finally turned back to the ring. He found his wife, Paris, and kissed her wearily before he was engulfed again by the madness of heavyweight boxing and the demands for his post-fight reaction in a ring seething with people.

It was a very different scene in the opposite corner. Blood coated Wilder’s lower lip, smearing it crimson, while a small swelling rose beneath his right eye. On his stool, Wilder looked up at the masked doctor while more blood seeped from his left ear. The doctor pressed a pad against Wilder’s lip and talked softly to him. At least the beaten boxer looked alert as he listened. His fiancée, Telli Swift, stood helplessly at ringside, blinking back her own tears and nodding again and again. Each nod seemed a search for consolation that, at least, the brutal fight was over. Wilder then stood up. A sad look of fresh disappointment stole across his face and he closed his left eye as if he felt an unsettling pressure in his head.

All these private little moments were moving and sombre reminders of how much boxing takes from even its greatest champions. This was a riveting contest, elevated by courage and resolve, but it was also a damaging fight which will have torn hidden chunks from both men. Wilder was sent to hospital, as a precaution, for he had been knocked down three times and, more worryingly, had absorbed one hard punch after another to the head. But the 35-year-old from Alabama refused to surrender and, even when he was exhausted and depleted, he kept looking to land one last thunderous right hand.

The conclusion of their epic trilogy confirmed that Fury is, unequivocally, the superior fighter. He looked badly shaken when he went down twice in the same round, for the first time in his career, but Fury has remarkable powers of recovery. Even more significantly, the 33-year-old has a natural aptitude for boxing. Rather than freezing or becoming bemused, Fury seems to think even more precisely and intelligently when he is in acute danger. He was helped by his trainer Sugarhill Steward who, at the end of the seventh round, dished out some industrial advice: “Just jab the mother-fucker, dammit!”

Fury duly went back behind the jab, a weapon which Wilder had used effectively to the body at the outset before he was too befuddled to rely on it once he had been sent to the canvas in the third round. The challenger, who has always been a wild and ragged technician, resorted to near total dependence on his right hand to get him out of trouble. It is capable of landing with terrifying force but even Wilder’s mighty power was rendered helpless by Fury’s far more skilful versatility and sheer ringcraft.

Wilder will need a long time to get over the pain and damage he endured in this glittering stretch of the Nevada desert. Fury also deserves rest and respite because, even though he was such a decisive winner, this was a fight which will warn him that boxing gets everyone in the end. He will defend his title again, probably in spring or early summer next year against the winner of the bout at the end of this month between Dillian Whyte and Otto Wallin. The winner of that fight, to be held in London, will become Fury’s mandatory challenger.

Whyte is expected to beat Wallin and seal an all-British world title fight. But he is unlikely to then end the reign of Fury whose last great challenge is to become the undisputed world heavyweight champion. The IBF, WBA and WBO belts are now held by Oleksandr Usyk, who outclassed Anthony Joshua two weeks ago. They are locked into a rematch with the winner knowing that all roads lead to the Gypsy King.

Usyk is favoured to beat Joshua again but, after watching this fight for the ages in Las Vegas, a man as intelligent as the Ukrainian will know that Fury operates on a higher plane. Late on Saturday night, as he cried and prayed while hunched over the ropes, Fury still showed how much he had been forced to give in the ring to find victory yet again.