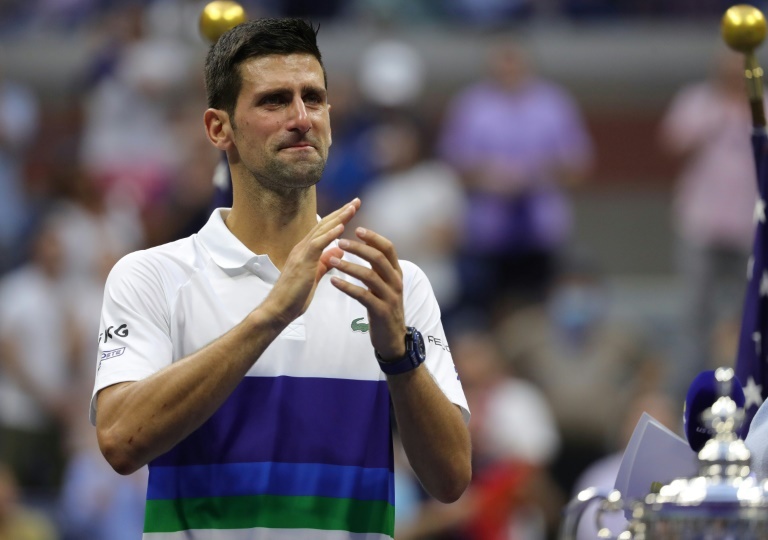 "Relief.I was glad it was over," Djokovic said about his feelings in the moments after the defeat.

"The buildup for this tournament and everything that mentally, emotionally I had to deal with throughout the tournament in the last couple of weeks was just a lot.It was a lot to handle," Djokovic said.

"I was just glad that finally the run is over.At the same time I felt sadness, disappointment, and also gratitude for the crowd and for that special moment that they created for me on the court."

Djokovic also missed out on a fourth US Open title and 21st career Grand Slam, leaving him deadlocked on the men's record 20 Slam trophies with Rafael Nadal and Roger Federer.

"So many different emotions," he said."Part of me is very sad.It's a tough one to swallow, this loss, considering everything that was on the line.

"But on the other hand I felt something I never felt in my life here in New York.The crowd made me very special.They pleasantly surprised me."

Down two sets and two breaks, US Open fans cheered for a Djokovic fightback with a spirit he said will stay with him as long as a Grand Slam might have.

"The amount of support and energy and love I got from the crowd was something I'll remember forever," Djokovic said."That's the reason on the changeover I just teared up.The emotion, the energy was so strong.

"It's as strong as winning 21 Grand Slams.That's how I felt, very special.They touched my heart.These are the kind of moments that you cherish.It was just wonderful."

Djokovic admitted he didn't have the game to stay with a determined Medvedev from the start.

"I was just below par with my game," Djokovic said."My legs were not there.I was trying.I did my best.I made a lot of unforced errors.I didn't have no serve really.

"Just one of these days where unfortunately wasn't meant to be.

"I know I could have and should have done better.It's a very tough loss."

Djokovic took the first look back at a year that brought Australian and French Open titles and a Wimbledon crown but heartache at New York and no medal at the Tokyo Olympics.

"Was also emotionally very demanding period for me in the last five, six months," he said.

"Unfortunately I didn't make it in the final step.But when you draw a line, you have to be very satisfied with the year.Three wins, three slams and a final.I have to be proud of everything I've achieved.

"In tennis we learn very quickly how to turn the next page.Very soon there are more challenges, more things coming up.I've learned to overcome these kind of tough losses in the finals of Slams, the ones that hurt the most.

"I'll try to draw some lessons from them, learn, be stronger, and keep going.As long as there is motivation and that flair, I'll keep riding."

Djokovic has to face a new set of rising 20-something stars, including Medvedev and Germany's Alexander Zverev, who beat him in the Olympic semi-finals and took him to five sets in the US Open semi-finals.

And there's the inevitable time when legends like Federer, Nadal and Djokovic must step aside.

"The older guys are still hanging on.We're still trying to shine the light on the tennis world as much as we possibly can," he said.

"I still want to keep going, try to win more Slams, play for my country.Those are the things that motivate me the most I think at this point.

"But the new generation is not anyone new.It's already current.Established.Of course, they are going to take over.I think tennis is in good hands."