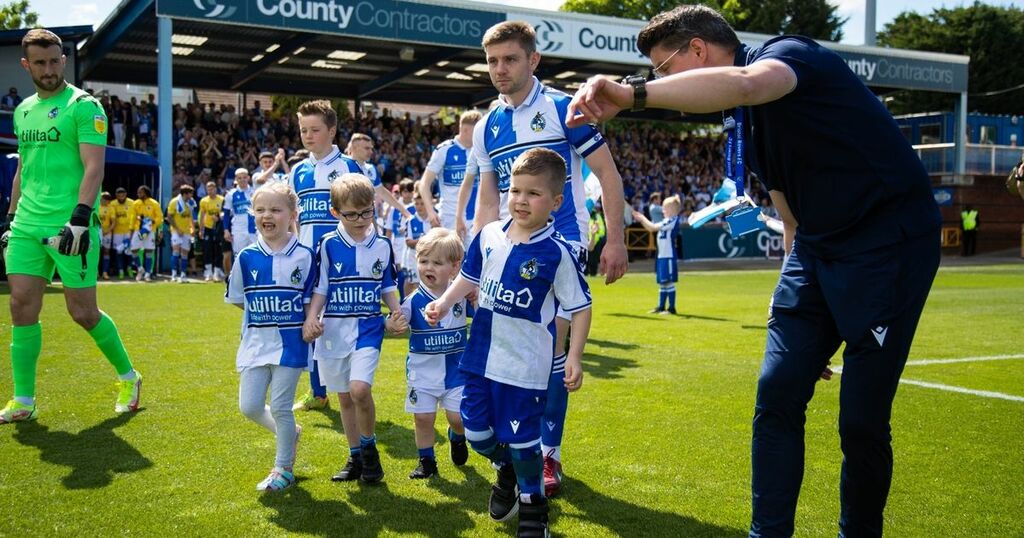 Bristol Rovers' 'lucky charm' who had life-changing surgery got to lead team out ahead of incredible 7-0 win
"Oscar was our lucky charm!"

The remarkable events of May 7 were vindication for Joey Barton at Bristol Rovers, but he was quick to deflect…

Team behind the team: The machine that helped power Bristol Rovers' promotion

There was no shortage of stars on the pitch for Bristol Rovers as they stunned the EFL with a truly remarkable final-day display to snatch promotion to League One, but the Gas also had plenty of unsung heroes behind the scenes playing their part throughout a thrilling season.

Joey Barton and his players have overcome a rocky start to deliver on their promotion promise, with the club riding an inexorable wave of momentum in the second half of the season. Barton's inspirational effect on his players was no doubt essential in galvanising and growing the team, but the network of staff working beneath him was also vital.

CEO Tom Gorringe has said plenty to praise the culture that has been created around the first-team environment, and here are some of the people that helped enable Rovers' promotion campaign...

Barton's closest allies. A trusted trio with a huge amount of experience from across all levels at the game.

Andy Mangan arrived at Rovers with Barton in February 2021, and he has been a pivotal part of Rovers' development. The former striker injects plenty of energy and has done good work at The Quarters on attacking set-pieces, notably a routine that paid off against Bradford City in April by exploiting a flaw in the Bantams' setup for the winning goal.

Goalkeeping coach Tony Warner deserves praise, too. Eyebrows were raised when the Gas parted ways with respected goalkeeping coach David Coles last summer, but Warner's work with the goalkeeping department has been excellent. James Belshaw has come on leaps and bounds since joining from Harrogate Town, Rovers' number one is always quick to praise the former Liverpool and Millwall keeper.

Kevin Bond has been a valued addition, too, with vast coaching experience working at the top level under Harry Redknapp for several years. Often in the dugout and occasionally watching the stands, his wisdom has been welcomed.

Vital in any good team, the medical department is an essential cog in the machine. Rovers has been functioning well.

In seasons past, Rovers have been overwhelmed with injury issues, but – with help of squad management and a bit of luck – Barton had his best players available in the big moments this season.

The case of Leon Clarke shone a light on the work of head physio Stuart Leake and sports therapist Leighanne Kelly, with the striker offering huge praise to the pair in January when he made a comeback from a career-threatening injury.

Chris Linthwaite has supported the pair in the physio department and now the season has ended he will be moving to the academy structure.

Club doctor Ian Ferguson continues to oversee the operation, with his insight into Connor Taylor's heart condition offering a window into his work.

A list of the standout statistics from the season highlight many strengths of Rovers' team, but one was more eye-catching than the rest. The Gas scored 21 goals in the 15 minutes of games this season, more than any other League Two team.

That is a far cry from the team that was relegated a year previously, which infamously failed to win a single point in the last 15 minutes of any game en route to finishing bottom of the league.

Strength and conditioning lead Tom Short and his understudies have enabled Barton to have a side in peak physical condition, relentless to the end as Saturday's thrashing of Scunthorpe showed with five second-half goals.

James Aitken also joined the club this season as a nutritionist, having worked for Barton at Fleetwood Town. Nicknamed "Carbs", he's a popular member of the group and ensures Rovers' food offerings at The Quarters, the Mem and on away days are appropriate.

The brothers Mahoney are usually found many feet above sea level, either on gantries, scaffolding or row Z with their cameras, streaming equipment and more.

The technical advances they have brought to Rovers have been hugely appreciated by Barton, with video replays available almost immediately in the dugout, increasing the coaching staff's ability to pivot during games.

Every training session is also recorded on the Hudl platform, too, meaning all players and staff can watch back sessions.

It may not be the most glamorous job, but it is an essential department of any club. Tony Allen's time as Rovers' kit man came to an end last month, but he was welcomed back on Saturday to be part of the final game of the season. He was supported by long-serving volunteer and assistant kit man Tom Foley, a very popular person in the dressing room.

Derek Segger's voluntary help has been valued, too, providing additional support to the first team at the training ground and on matchdays.

Bristol Rovers' 'lucky charm' who had life-changing surgery got to lead team out ahead of incredible 7-0 win
"Oscar was our lucky charm!"

The remarkable events of May 7 were vindication for Joey Barton at Bristol Rovers, but he was quick to deflect…