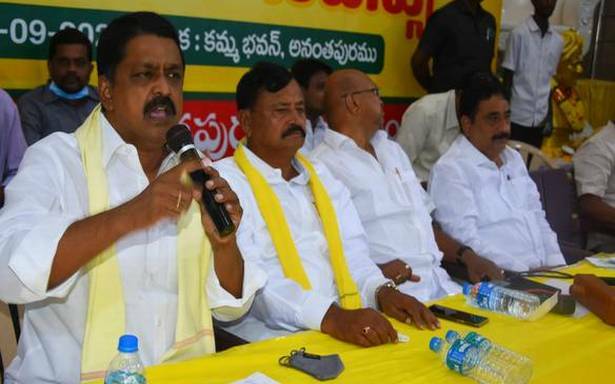 The YSRCP government has done injustice to the irrigation water needs of the Rayalaseema region by not investing enough in the Handri-Neeva Sujala Sravanthi (HNSS) project for the past two-and-a-half years, the TDP has alleged, and has asked Chief Minister Y.S. Jagan Mohan Reddy to make efforts to get water officially allocated to the region through the Krishna River Management Board (KRMB).

At a special meeting of the party presidents and in-charges of eight Lok Sabha constituencies of Rayalaseema districts here on Saturday, a majority of the leaders called for “direct agitation” to protect the water rights of the region. A few other leaders said that the “inaction by the YSRCP on the issue” should be explained to the people.

Uravakonda MLA and Public Accounts Committee Chairman Payyavula Keshav alleged that Mr. Jagan Mohan Reddy had not been doing enough to protect the water rights of the region.

“The Chief Minister has failed to get the Galeru-Nagari Sujala Sravanthi, the HNSS, and the Telugu Ganga projects notified as approved projects, as a result of which they have been tagged as unapproved,” Mr. Keshav said.

“The Chief Minister must explain to the people the funds spent on development of Rayalaseema. He should also explain why he is not firm on protecting the State’s right on availing 512 tmcft of water as agreed upon by the Chief Ministers concerned at a KRMB meeting in 2015,” he said.

Releasing the expenditure statement of November 2020 given by the Chief Engineer (projects) on the HNSS Phase-1 and Phase-2, TDP Polit Bureau member Kalava Srinivasulu said, “While the TDP, during its term, had spent ₹4,182.67 crore and completed 40% of the works, the YSRCP government has so far spent only ₹301.43 core with no progress at all.”

Mr. Srinivasulu further alleged that Mr. Jagan Mohan Reddy had a tacit understanding with his Telangana counterpart K. Chandrashekhar Rao on sharing the Krishna waters so that his interests in Hyderabad were protected.

Former Minister K.E. Prabhakar suggested that Andhra Pradesh provide power to Telangana if it was in dire need so that the neighbouring State did not generate power from the stored water in Srisailam, Nagarjuna Sagar, or Pulichintala.

Pratap Reddy from Kurnool suggested construction of Siddeswaram project 26 km upstream of Srisailam dam to reduce siltation and impound 30 tmcft water to meet the needs of the Rayalaseema districts.

Srinath Reddy from Chittoor stressed the need for unity within the party on the issue.

Tadipatri Municipal Chairman J.C. Prabhakar Reddy, Narasimha Prasad from Railway Koduru, and Lingareddy from Kadapa were among others who attended the meeting.