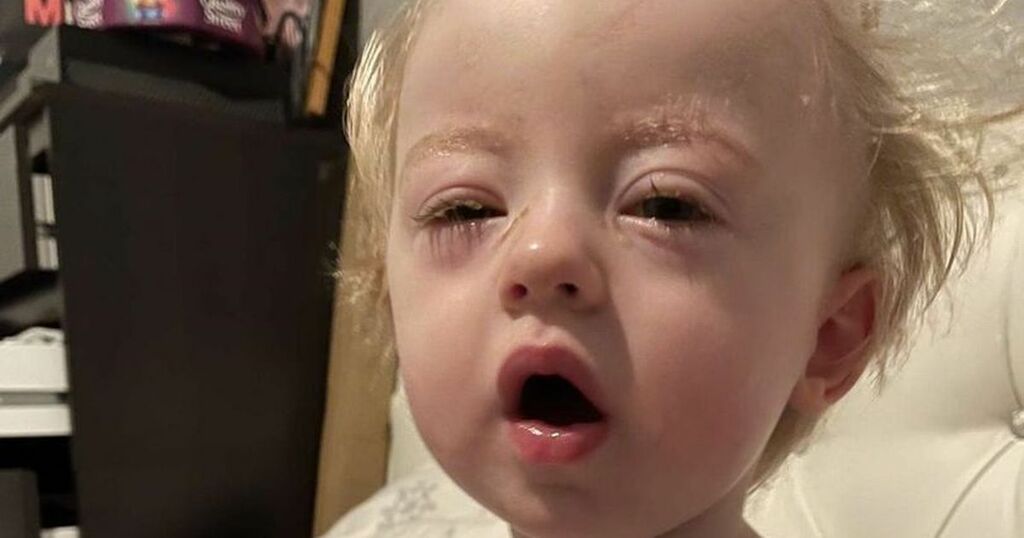 A taxi driver refused to take an 18-month-old boy to hospital because his medically exempt father could not wear a face mask for the journey.

Joseph Robertson, 25, booked the taxi with local firm DG Cars to take him and his sick child from their Chilwell home to the Queen's Medical Centre at 1.16am on Thursday, January 6.

The dad and partner Ruby Walsh, 21, sought medical advice after noticing son Louie Robertson's face had started to swell and his eyes were weeping with puss, according to Nottinghamshire Live.

However, they were informed that the wait for an ambulance would be 8-10 hours, and as both do not drive, they decided to book a taxi to get Louie to A&E as quickly as possible.

But when the taxi driver turned up, he refused Mr Robertson entry, because he was not wearing a face mask.

He cannot wear face masks because it makes him struggle with anxiety and panic attacks, and raises his heart rate significantly.

Mr Robertson was wearing a sunflower lanyard with a medical exemption card, showing that he cannot wear face masks, but the taxi driver still refused and cancelled the ride.

DG Cars sent another driver, but this was cancelled by the family who then booked a taxi with Uber, which they said got them there safely and with no problems.

Louie was then seen and treated for conjunctivitis, an eye condition caused by allergies or infection.

He was given a course of antibiotics.

Mr Robertson could not believe the first taxi driver had refused their ride.

He said: "I told him I can get anxious and struggle with panic attacks by wearing a face covering, and that I need to get my son to A&E, but he still refused; I got so angry.

"I'm very surprised one guy can refuse me and my 18-month-old son, yet another can take me - I feel let down, and luckily it was only conjunctivitis and that it wasn't a whole lot worse.

"In the picture, it looks like an allergic reaction, and we thought it could have been conjunctivitis, and we noticed he had pus and gunk coming out both of his eyes - he's only got one set of eyes and we didn't want to take the risk of anything else happening.

"If someone out there is refusing me, it makes me question who else is being refused, as there could be someone else in a worse position that needs help."

She said: "It made me so angry as your eyes are one of the most important parts of your body - if you do not have eyes, you are blind.

"Our heads were all over the place.

"Uber usually say about wearing a face covering, but there was nothing along those lines from DG Cars.

"If members of the public do not wear a mask, they normally put up a plastic sheet, and if the driver was that concerned, he should have put one up."

A spokesperson for DG Cars said: "Our records show the driver declined the booking (as unfortunate as this is, drivers are self employed and as such can do so) and another driver was immediately sent who would have arrived five minutes later.

"This booking was then cancelled by the customer eight seconds after the driver was dispatched.

"We have received no complaint about any aspect of this booking and after listening to all call recordings can see no issues raised by the customer.

"Sadly, a 10-hour wait for an ambulance once again shows the pressures the NHS is under.

"Our own industry is facing a driver shortage due to the effects of the pandemic and Brexit.

"Despite the extreme pressures we are under we make every attempt to provide the best service to our customers and the communities we serve."