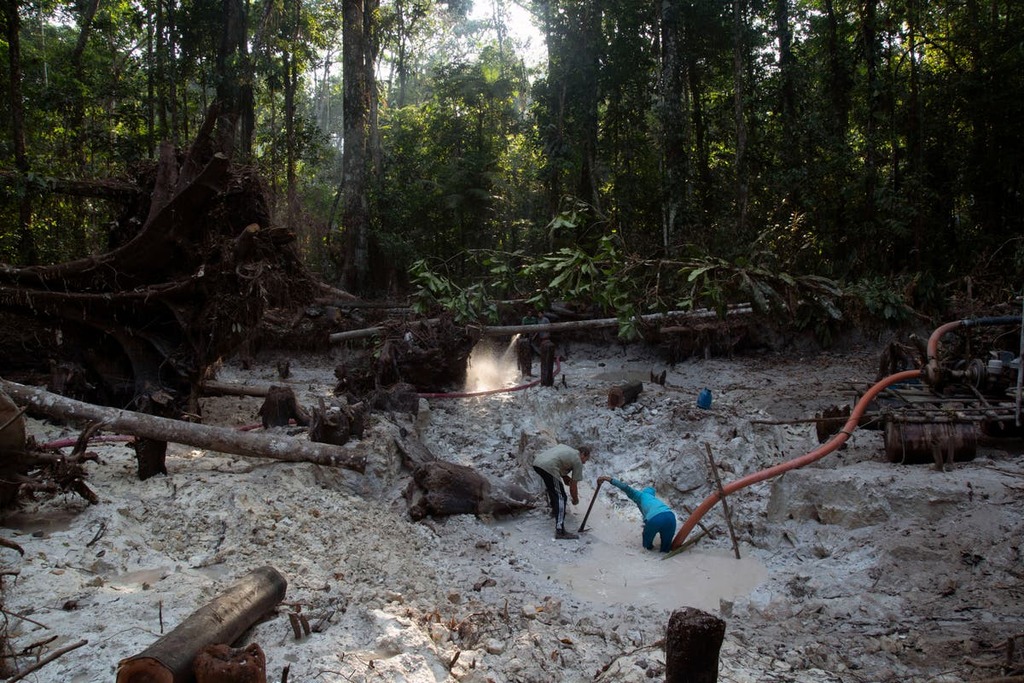 The medals were billed as the most sustainable ever produced.

To match the festive spirit of South America’s first Olympics, officials from Brazil the host country for the 2016 games in Rio de Janeiro, boasted that the medals hung around the necks of athletes on the winners’ podium were also a victory for the environment: The gold was produced free of mercury and the silver recycled from thrown away X-ray plates and mirrors.

Five years on, the refiner that provided the gold for the medals, Marsam, is processing gold ultimately purchased by hundreds of well-known publicly traded U.S. companies — among them Microsoft Tesla, and Amazon — that are legally required to responsibly source metals in an industry long plagued by environmental and labor concerns.

But a comprehensive review of public records by The Associated Press found that the Sao Paulo-based company processes gold for, and shared ownership links to, an intermediary accused by Brazilian prosecutors of buying gold mined illegally on Indigenous lands and other areas deep in the Amazon rainforest.

The AP previously reported in this series that the scale of prospecting for gold on Indigenous lands has exploded in recent years and involves carving illegal landing strips in the forest for unauthorized airplanes to ferry in heavy equipment, fuel, and backhoes to tear at the earth in search of the precious metal. Weak government oversight enabled by President Jair Bolsonaro the son of a prospector himself, has only exacerbated the problem of illegal gold mining in protected areas. Critics also fault an international certification program used by manufacturers to show they aren’t using minerals that come from conflict zones, saying it is an exercise in greenwashing.

“There is no real traceability as long as the industry relies on self-regulation,” said Mark Pieth, a professor of criminal law at the University of Basel in Switzerland and author of a 2018 book called “Gold Laundering.” “People know where the gold comes from, but they don’t bother to go very far back into the supply chain because they know they will come into contact with all kinds of criminal activity.”

Much like brown and black tributaries that feed the Amazon River, gold illegally mined in the rainforest mixes into the supply chain and melds with clean gold to become almost indistinguishable.

Nuggets are spirited out of the jungle in prospectors’ dusty pockets to the nearest city where they are sold to financial brokers. All that’s required to transform the raw ore into a tradable asset regulated by the central bank is a handwritten document attesting to the specific point in the rainforest where the gold was extracted. The fewer questions asked, the better.

At many of those brokers’ Amazon outposts — the financial system’s front door — the gold becomes the property of Dirceu Frederico Sobrinho.

For four decades, Dirceu has embodied the up-by-your-bootstraps myth of the Brazilian garimpeiro, or prospector. The son of a vegetable grocer who sold his produce near an infamous open-pit mine so packed with prospectors — among them Bolsonaro’s father — they looked like swarming ants, he caught the gold bug in the mid-1980s.

Today, from a high rise on Sao Paulo’s busiest avenue, he is a major player in Brazil’s gold rush, with 173 prospecting areas either registered to his name or with pending requests, according to Brazil's mining regulator’s registry. In the same building is the headquarters of the nation’s gold association, Anoro, which he leads. Dirceu — universally known by his first name — until last year, was also a partner in Marsam.

But even with gold jewelry dangling from his fingers and wrist, Dirceu still proudly boasts his everyman garimpeiro roots.

“You don’t motivate someone to go into the forest if they’re not chasing after a dream,” he said in a rare interview from his corner office studded with a giant jade eagle. “Whoever deals in gold has that: They dream, they believe, they like it.”

At the center of Dirceu’s empire is F.D’Gold, Brazil’s largest buyer of gold from prospecting sites, with purchases last year totaling more than 2 billion reais ($361 million) from 252 wildcat sites, according to data from the mining regulator. Only two international firms that run industrial-sized gold mines paid more in royalties in 2021, a sign of how once artisanal prospecting has become big business in Brazil — at least for some.

In August, federal prosecutors filed a civil suit against F.D’Gold and two other brokers seeking the immediate suspension of all activities and payment of 10 billion reais ($1.8 billion) in social and environmental damages.

The complaint alleges the companies failed to take actions that would have prevented the illegal extraction of a combined 4.3 metric tons from protected areas and Indigenous territories, where mining is not allowed. Dirceu said his company complies with all laws and has implemented extra controls, but he acknowledged that determining the exact origin of the gold it obtains is “impossible” at present.

The ongoing suit is the result of a study published last July by the Federal University of Minas Gerais that found that as much as 28% of Brazil’s gold produced in 2019 and 2020 was potentially mined illegally. To reach that conclusion, researchers combed through 17,400 government-registered transactions by F.D’Gold and other buyers to pinpoint the location where the gold was purportedly mined. In many cases, the given location wasn’t an authorized site or, when cross-checked with satellite images, showed none of the hallmark signs of mining activity — deforestation, stagnant ponds of waste — meaning the gold originated elsewhere.

Whatever its origin, all the raw ore purchased by F.D’Gold ends up at Marsam.

F.D’Gold accounts for more than one-third of the gold Marsam processes, according to André Nunes, an external consultant for Marsam.

After almost two years as a partner in the Sao Paulo-based refiner, Dirceu stepped down last year and his daughter, Sarah Almeida Westphal, assumed management responsibilities. It was part of an effort to put different family members in charge of their own businesses, which function as separate legal entities, said Nunes, who previously worked for F.D’Gold.

“As much as it’s the same family, it’s important that each monkey has its own branch,” he said.

But Westphal could be seen working on a computer at F.D’Gold’s office on the day the AP interviewed Dirceu.

More than 300 publicly traded companies list Marsam as a refiner in responsible mining disclosures they are required to file with the U.S. Securities and Exchange Commission. The refiner has been virtually the only supplier to Brazil’s mint over the past decade, according to data provided to the AP through a freedom of information request.

Enabling such robust sales around the world is a seal of approval from the Responsible Minerals Initiative, or RMI.

The certification program, run by a Virginia-based coalition of manufacturers, emerged with the passage a decade ago of legislation in the U.S. requiring companies to disclose their use of conflict minerals fueling civil war in the Democratic Republic of Congo. Later, its standards were supplemented by tougher guidelines developed by the Paris-based Organization for Economic Cooperation and Development or OECD

Marsam is one of just two refiners in Brazil certified as compliant with RMI’s standards for responsible sourcing of gold, having successfully completed two independent audits. The last one was performed in 2018 by UL Responsible Sourcing, an Illinois-based consultancy.

Marsam hasn’t been accused by prosecutors of any wrongdoing and insists that it only refines gold, not sell it, on behalf of third-party exporters and domestic vendors.

The company in 2016 introduced a supply chain policy, which it has updated over the years, requiring it to seek out information from suppliers whenever they are publicly linked to illicit activities. They are also expected to analyze a mandatory declaration of origin form submitted by each client. No such risks were identified in the most recent RMI report and the Marsam was moved to a lower risk category requiring an audit once every three years.

Critics say one problem is that the OECD’s guidelines RMI measures companies against pay scant attention to environmental crimes or the rights of Indigenous communities. Instead, they are geared toward risks stemming from civil wars and criminal networks. In Latin America, only Mexico, Colombia and Venezuela — where drug cartels or guerrilla insurgencies are active — are classified as conflict-affected and high-risk areas deserving greater scrutiny for sourcing practices.

“Certification connotes a degree of certitude that isn’t at all possible in the gold industry, especially in Brazil,” said David Soud, an analyst at I.R. Consilium, which recently prepared a report for the OECD on illegal gold flows from neighboring Venezuela. “The result is a lot of blind spots that can easily be exploited by bad actors.”