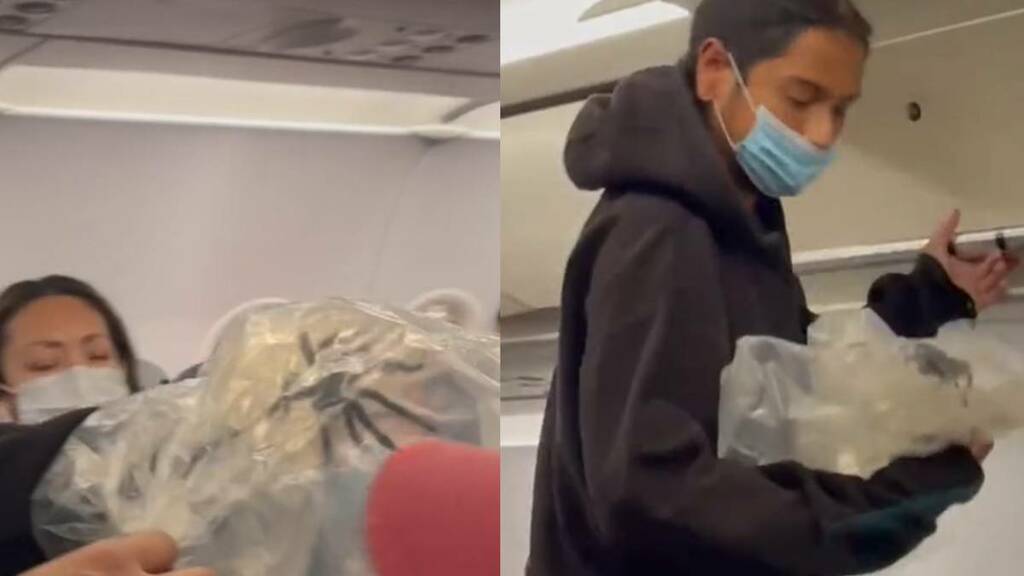 There was nothing comforting about a pet tarantula discovered on a passenger plane this week.

The large creepy crawly was spotted by passengers in the overhead lockers of a service with Mexican airline Volaris.

While the large spiders are commonly kept as pets, nobody was owning up to the eight-legged animal.

It is currently unknown how the arachnid got on the passenger plane. However, it was up to the cabin crew to get it off.

In a video a brave traveller can be seen carefully catching the crawly in plastic wrapping.

It is not clear if the man in a thick, black pullover was an airline employee, however he was the only person brave enough to get close to the arachnid.

"This guy captured it while we were flying!" said onlooker DirectorBrazil who posted the video to instagram.

Having cleared the rows of seats directly below the spider, the rest of the plane watched on, filming the mid-air horror show on cell phones.

There was little wiggle room for squeamish passengers.

Finally, triumphant, he catches the spider in a clear plastic wrap.

Carrying it down the aisle the trapped tarantula can still be seen wriggling, apparently unharmed.

"Shout out to the employee who saved our lives," wrote the Tiktok account of Hype Socks, whose CEO had been travelling on the plane.

There are several species of Tarantula native to central and south America, none of which are poisonous. The large, eight-legged animals are common pets, though not everyone is a fan.

"Omg. Flying and spiders are my two biggest fears," commented one viewer.

Perhaps, it was looking for more legroom?