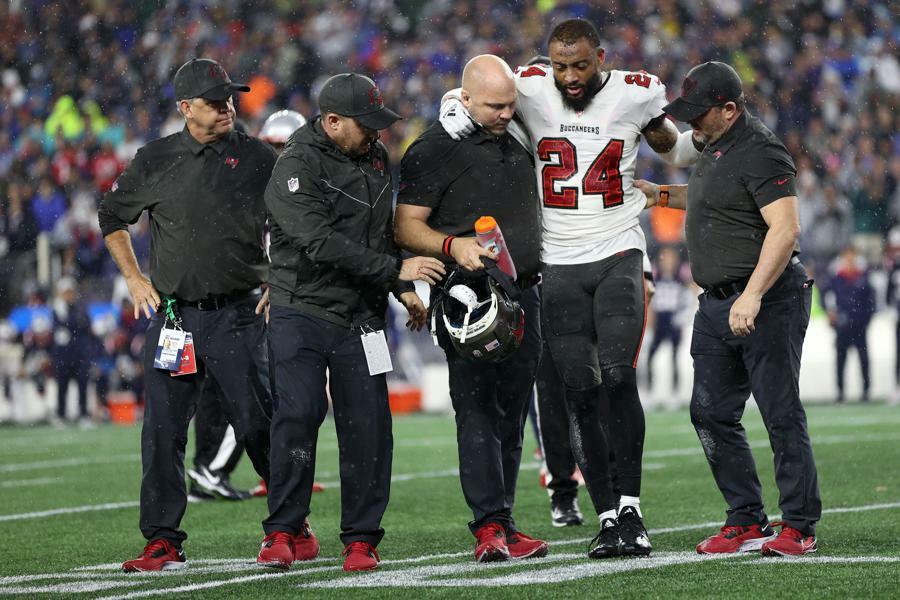 Entering the 2021 season, the Tampa Bay Buccaneers appeared to be the overwhelming favorites to repeat as Super Bowl champions.

After all, not only were they coming off of a dominating 31-9 victory over the high-powered Patrick Mahomes-led Kansas City Chiefs, they were returning all 22 of their starters from last season.

But through four weeks of the season, the Buccaneers look vulnerable — very vulnerable, in fact.

Tampa Bay is currently 3-1. They’re on top of the NFC South division and don’t look to be in any sort of danger of missing the postseason.

However, when you look underneath the pretty record, you see a team with many flaws — a lot of which has to do with the team’s mounting list of injuries.

The defensive backfield is the main area of concern for Tampa Bay. The Buccaneers were dealt a serious blow with the dislocated elbow injury of Sean Murphy-Bunting in Week 1. Not long after, he was placed on injured reserve.

Entering Week 5 against the Miami Dolphins, there is still no timetable for the starting cornerback’s return.

If that wasn’t bad enough, Carlton Davis — the team’s other starting cornerback — is now also on injured reserve after suffering an abdomen injury in the Buccaneers’ Week 4 victory over the New England Patriots.

In fact, earlier this week during his media availability, head coach Bruce Arians gave a defining answer regarding the timetable of Murphy-Bunting and Davis’ returns — he doesn’t expect either cornerback to come back anytime soon.

As if the situation didn’t appear grim enough, starting free safety Antoine Winfield Jr. was concussed during the Week 4 victory. Through Thursday, he has yet to practice and is considered questionable for the team’s Week 5 game against the Dolphins.

Nickel cornerback Jamel Dean was also forced to miss the matchup against the Patriots due to a knee injury. For the Buccaneers’ sake, it looks to be a short-term injury and appears to be on track to return in Week 5 against the Dolphins.

These mounting injuries forced the Buccaneers to rely on Richard Sherman — a 33-year-old cornerback who had been signed four days prior — and Pierre Desir, who was signed to the practice squad in mid-September shortly after Murphy-Bunting’s injury.

Even after the additions of Sherman and Desir, the backfield is so banged up that the team had hopes of signing former Patriots cornerback Stephon Gilmore. However, those hopes were squashed once New England decided to trade its Pro Bowl corner, rather than waive him.

The weaknesses of the defensive backfield caused by the litany of injuries has caused the team to have one major flaw in their attempt to repeat as Super Bowl champions. The Buccaneers are currently 23rd in points allowed, 32nd in passing yards and 30th in passing touchdowns allowed.

That’s not even mentioning the rib injuries suffered by tight end Rob Gronkowski, who had re-emerged as one of Brady’s favorite weapons early on in the 2021 season. His absence was felt in the team’s narrow victory over the Patriots, as fill-in tight end Cameron Brate struggled to replicate Gronkowski’s production.

Brate caught just two passes for 29 yards on six targets in the victory despite playing in 64 percent of the team’s snaps. It was also part of the reason Brady struggled in the game, considering he didn’t have his top safety blanket and red zone weapon versus the Patriots.

It’s early on in the season, so the Buccaneers have that working in their favor.

But as productive as Brady continues to be in his age-44 season, the Buccaneers won’t come close to repeating as Super Bowl champions if they’re forced to rely on free agent pickups off of the street to play major roles in the defensive backfield.

It doesn’t matter how magical Brady is. If he doesn’t have a defensive backfield that can remain upright, Tampa Bay will see its Super Bowl hopes fade earlier than expected come January.