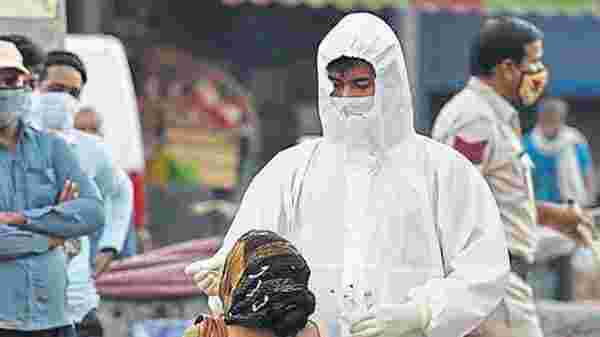 Nearly 80-85% of the total Covid-19 patients in Tamil Nadu were people who had 'S' gene drop in their samples, indicating contraction of Omicron variant, said state health minister Ma Subramanian said on Sunday.

Further, he said that the remaining 15-20% of patients have Delta variant. The minister also pointed out that it was satisfying to know that there were no fatalities among those who were detected with 'S' gene drop.

Subramanian said nearly 90% of those affected by Omicron have received both doses of vaccination and were asymptomatic.

In view of this, he appealed to people to get vaccinated to protect themselves from the virus.

"Everyone should receive a double dose of vaccination against Covid-19. People should adhere to Covid-19 protocol like wearing a face mask among others," he said.

Subramanian said new Covid-19 cases were going up in Tamil Nadu by adding more than 2,000 infections every day.

Stating that the Greater Chennai Corporation (GCC) officials have been taking up various steps to contain the spread of Covid-19, he said the civic body penalised organisers of 13 weddings held in the city on Saturday, which saw more than 100 people converging at the venue as against the government-mandated cap of 100 attendees.

In a separate incident, GCC Commissioner Gagandeep Singh said over 2,000 people were penalised for not wearing a mask and advised people to strictly wear a mask when stepping out of the home.

“People who are offering food or taking care of a Covid-19 patient who is under home isolation should wear a mask as this is an airborne disease. The relative or a family member should not use the same restroom or toilet which has been used by the Covid-19 patient," he said.

"We are receiving many new cases of another family member or relative getting affected after coming in close contact with Covid-19 affected individual", he added.

Apart from this, Subramanian said the GCC has advised private health care facilities to inform about patients who have been admitted after detection of 'S' gene drop in their samples.

"Though patients receive treatment in private health care facilities, it is the duty of the health department to collect the details of that individual. The GCC penalised six private hospitals yesterday for not informing the civic body about 'S' gene drop detection by such hospitals", he said.

Subramanian said initially the civic body would collect fines from such private hospitals and warned such hospitals would be shut if they continue to do so in future.

Stating that Chief Minister M K Stalin would inaugurate the launch of booster dose to frontline workers and those above 60 years who are eligible to receive their dose on Monday, he said: "Nearly four lakh people are eligible to receive the dose tomorrow... it comprises of health care workers, frontline workers and people above 60 with co-morbidities."

"These people have received the double dose before 14 April 2021 (as mandated by the government)", he added.

On the vaccination administered to those aged between 15-18 years, the health minister said there were 33.46 lakh people who are eligible to receive the dose and as of Saturday, it crossed 22.50 lakh beneficiaries.

"We expect that we will be able to complete 100 per cent vaccination to 15-18-year-olds very soon", he said.

Tamil Nadu commenced administering of vaccines to the adolescent age group on 3 January.