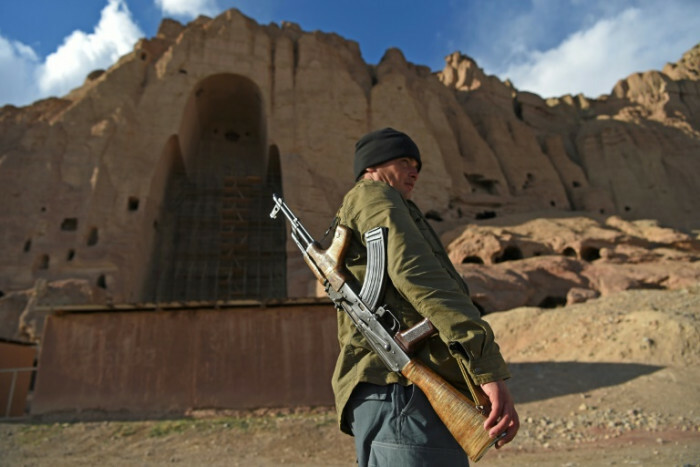 ISLAMABAD: Bamiyan's cultural centre should have been completed last month, showcasing the remarkable heritage of a site that Afghanistan's Taliban desecrated two decades ago by dynamiting ancient statues of Buddha.

But the red carpet celebrations will have to wait. After the Taliban swept triumphantly into the capital Kabul, everything was put on hold.

"Everything is suspended," said Philippe Delanghe, from UNESCO, the UN's cultural agency, who said they are awaiting the decisions of the new regime.

Afghanistan once stood on the legendary Silk Road trade route, a crossroads of ancient civilisations.

Now in the hands of the hardline Islamist Taliban, there are fears its heritage is at risk.

In March 2001, the Taliban spent weeks using dynamite and artillery to blow up two giant 1,500-year old statues of Buddha, carved into a cliff at Bamiyan, some 175 kilometres (78 miles) west of Kabul.

Many consider the wanton destruction to be among the world's worst cultural crimes.

It was an act that brought the Islamist's radical ideology to global attention, just a few months before Al-Qaeda -- who the Taliban hosted in Afghanistan -- carried out the devastating 9/11 attacks on America.

"We judge by history, and 20 years ago there were terrible results," Ernesto Ottone, UNESCO's assistant director general for culture, told AFP.

In February, the Taliban said that Afghanistan's relics were part of the country's "history, identity and rich culture" and that "all have an obligation to robustly protect, monitor and preserve these artefacts".

Among Afghanistan's top sites are the Buddhist shrines at Mes Aynak, and the 12th-century Minaret of Jam, a UNESCO World Heritage site.

But since seizing power, the Taliban have said nothing more.

There are worrying signs. In mid-August, residents in Bamiyan accused the Taliban of blowing up a statue honouring a Hazara leader -- an ethnic group persecuted by the Islamists -- who they had killed in the 1990s.

AFP could not confirm the reports, but social media images appeared to show a decapitated statue.

Philippe Marquis, director of the French Archaeological Delegation in Afghanistan (DAFA), told AFP he remains cautious about what will happen.

"We have no declarations saying: 'We are going to destroy everything or erase everything from the non-Islamic past'", he said.

Since 2016, it has become a war crime to destroy cultural heritage sites.

Many are worried for the National Museum in Kabul, which survived being ransacked both during the 1992-1996 civil war that followed the Soviet military withdrawal, as well as under the Taliban's first regime, from 1996-2001.

Some feared the prospect of mass looting, as happened following conflict in Iraq and Syria, where extremist fighters raised funds by selling ancient artefacts on the black market.

However, the Taliban's seizure of Kabul was achieved with barely a shot being fired, and the museum appears to have emerged unscathed.

Only a third of the thousands of priceless objects in Kabul's museum have been catalogued.

But he added he still has "great concern for the safety of our staff and our collection".

International funding for cultural protection has also been suspended, and it is not clear when it would resume.

"We are holding our breath," Marquis said. "But I hope that soon we will be able to breathe a little lighter."

Many Afghans who were working to protect cultural heritage have fled abroad, or are in hiding and too scared to speak out.

Those who do have warned that the Taliban promises of protection are empty rhetoric to win international support.

"As illiterate extremists, they are proud to destroy non-Muslim monuments," said Mustafa, a former UNESCO employee at Bamiyan, now a refugee in Germany.

An official who worked for the Bamiyan government said Taliban fighters smashed instruments and art objects belonging to the culture department after seizing the province in early August.

"I was sad, but I couldn't protest," the official said.

"I had no guarantee that they weren't going to accuse me... of idolatry and turn their guns on me and kill me."