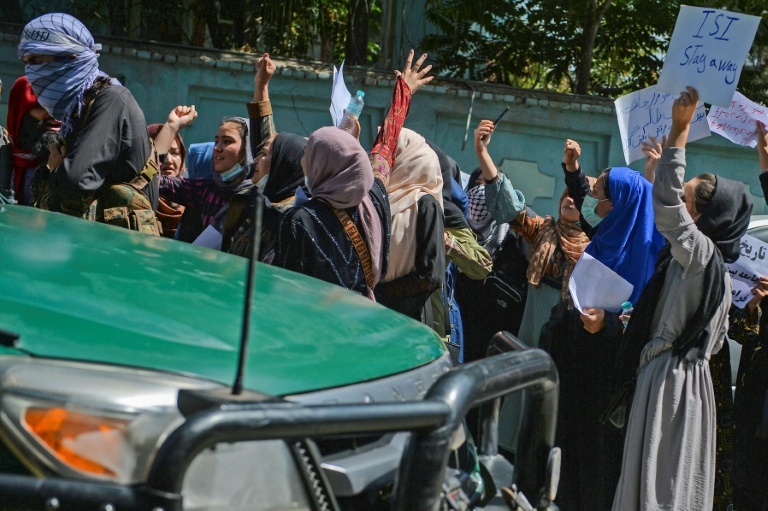 Kabul (AFP) - The Taliban on Tuesday fired shots into the air to disperse hundreds of people who had gathered at several rallies in Kabul, the latest signs of defiance by Afghans against the hardline Islamist movement which swept to power last month.

Afghanistan's new rulers have yet to form a government, but many in the capital are fearful of a repeat of the Taliban's previous brutal and repressive reign between 1996 and 2001.

At least three rallies were held across Kabul in a show of resistance that would have been unthinkable during the Taliban's last stint in power -- when people were publicly executed and thieves had their hands chopped off.

"We want that all our people have normal lives.How long shall we live in this situation?" the 25-year-old said.

The crowd held up banners and chanted about their frustrations with security, free passage out of the country and alleged meddling by Pakistan -- which historically has had close ties with the Taliban leadership.

Pakistan, one of just three countries that recognised the last Taliban government, has long been accused of offering its leaders safe haven after they were kicked out of power by the US-led invasion of 2001.

Pakistan's intelligence chief Faiz Hameed was in Kabul at the weekend, reportedly to be briefed by his country's ambassador but is likely to have also met with Taliban officials.

Videos posted on social media of a separate rally showed more than a hundred people marching through the streets under the watchful eye of armed Taliban members.

Scattered demonstrations have also been held in smaller cities in recent days, including in Herat and Mazar-i-Sharif where women have demanded to be part of a new government.

General Mobin, a Taliban official in charge of security in the capital, told AFP he had been called to the scene by Taliban guards who said that "women were creating a disruption".

"These protesters are gathered based only on the conspiracy of foreign intelligence," he claimed.

An Afghan journalist covering the demonstration told AFP his press ID and camera were confiscated by the Taliban.

"I was kicked and told to go away," he said.

Later, the Kabul-based Afghan Independent Journalists Association said 14 journalists -- Afghan and foreign -- were detained briefly during the protests before being released.

"The association strongly condemns the violent treatment of journalists in recent demonstrations and calls on the authorities of the Islamic Emirate to take appropriate measures to prevent violence and protect journalists," it said in a statement.

Images shared online showed reporters with cuts and bruises to their hands and knees.

Meanwhile, US Secretary of State Antony Blinken said the Taliban had reiterated a pledge to allow Afghans to freely depart Afghanistan.

The Taliban told the United States that "they will let people with travel documents freely depart", Blinken said at a news conference in Doha where he and Defence Secretary Lloyd Austin met their Qatari opposite numbers.

US President Joe Biden has faced mounting pressure amid reports that several hundred people, including Americans, have been prevented for a week from flying out of an airport in northern Afghanistan.

Tuesday's demonstrations come after the Taliban claimed total control over Afghanistan a day earlier, saying they had won the key battle for the Panjshir Valley.

Following their lightning-fast victory in mid-August over the former Afghan government's security forces and the withdrawal of US troops after 20 years of war, the Taliban turned to fighting the resistance forces defending the mountainous region.

As the Islamist hardliners claimed victory on Monday, their chief spokesman warned against any further attempts to rise up against their rule.

"Anyone who tries to start an insurgency will be hit hard.We will not allow another," Zabihullah Mujahid said at a press conference in Kabul.

As the Taliban undertake a mammoth transition into overseeing key institutions and cities of hundreds of thousands of people, they face major challenges including looming financial and humanitarian crises.

Afghanistan's new rulers have pledged to be more "inclusive" than during their first stint in power, with a government that represents the country's complex ethnic makeup -- though women are unlikely to be included.