Taliban crack down on protest led by Women in Kabul 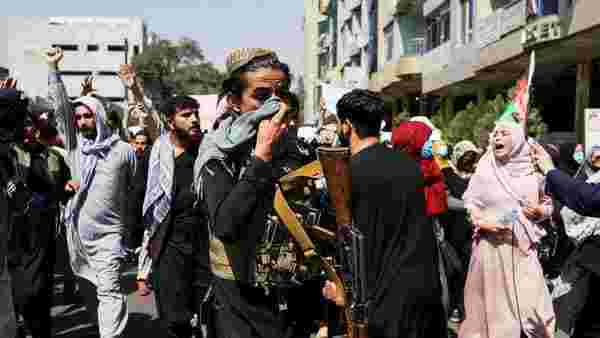 Tuesday’s protest was triggered by the presence in Kabul of Lt. Gen. Faiz Hameed, the head of Pakistan’s Inter-Services Intelligence agency, who is involved in talks toward forming a new Taliban-led administration. Pakistan has supported the Afghan Taliban since the Islamist movement was born in the 1990s.

Organized mostly by women, Tuesday’s protests started off peacefully, with several hundred marching down the streets of Kabul and chanting, “Death to Pakistan." They also expressed support for the anti-Taliban resistance in Panjshir province, whose capital was seized by Taliban forces on Monday.

At first, more disciplined Taliban units along the way didn’t intervene. But once the march reached the city’s central Shahr-e-Naw neighborhood, Taliban fighters started beating the protesters with batons and whips, and firing in the air.

Several windows at the upper floors of a nearby hotel were blown out as some Taliban gunmen failed to control their muzzles when they unloaded volleys of bullets. Several dozen protest organizers were forced into the basement of a nearby bank, and many others were detained. There were no reports of casualties.

“We must continue our protest against dirty Pakistan, which is interfering in Afghanistan. Why is Pakistan not being sanctioned? We will never recognize this government, which is a puppet of Pakistan and attacks our people and violates women’s rights and dignity," one of the organizers, a women’s-rights activist in her 30s, said when reached by phone in the bank’s basement.

With the advances into Panjshir, the Taliban have essentially extinguished the only remainder of armed opposition to their rule. Tuesday’s demonstrations, however, show that they also have to reckon with simmering discontent within the wider Afghan society, particularly in Kabul, a modern metropolis where many oppose the Taliban’s puritan ways. With the country cut off from the international financial system and most foreign aid, long lines have formed daily at bank branches in Kabul as Afghans try to withdraw at least part of their savings.

Bilal Karimi, a Taliban spokesman, mocked Tuesday’s protesters, pointing out on Twitter that all of the leaders of the so-called anti-Taliban uprisings, including those from Panjshir, have fled abroad. “All the Facebook and Twitter instigators live in the West, while their sheeplike followers have come to Kabul for demonstrations, disrupting security and order," he wrote. Other Taliban officials said that the protesters were trying to build asylum cases so they would be able to emigrate to the West.

Leaders of the deposed Afghan republic have long portrayed the Taliban as Pakistan’s stooges, trying to harness widespread popular resentment of the Pakistani state. No Afghan government has recognized the British-drawn Durand Line between the two nations as an international border, and Afghan nationalists have maintained for decades that Pakistan’s Pashtun-speaking areas should belong to Afghanistan.

Pakistan’s Gen. Hameed was spotted in Kabul’s Serena Hotel as the Taliban prepare to unveil their new government in coming days. While the movement’s supreme leader, Mawlawi Haibatullah Akhundzada, is all but certain to have the last word on major decisions, day-to-day governance is likely to be in the hands of the head of the Taliban’s political office, Mullah Abdul Ghani Baradar.

Mr. Baradar has already met visiting international dignitaries, including the United Nations’ undersecretary general for humanitarian affairs, Martin Griffiths, on Monday. In a sign of outreach to wider political forces, he sat during that meeting next to the tricolor flag of the fallen Afghan republic rather than the white banner of the Taliban’s Islamic Emirate.

Shortly after the Aug. 15 fall of Kabul, Taliban representatives visited key personalities of the former republic who stayed behind in the Afghan capital, such as former President Hamid Karzai and former chief peace negotiator Abdullah Abdullah. More recently, however, Taliban officials have said that leading members of the old regime are unlikely to be allowed to participate in the new administration.

In Kabul, opinions were divided about Tuesday’s protests. A shopkeeper along the march’s route said he agreed with the demonstrators. “The Taliban government, we don’t know who is doing what, and whether it is Pakistan that is pulling all the strings," he said. “The banks have no money, the business is in trouble, everyone is talking about a coalition against the Taliban."

The shopkeeper next door held an opposite view. “The previous government was a government of corruption. They are all out there protesting because they can’t steal anymore," he said. “The Islamic Emirate brought us security and a true Islamic system."

Across the street, a bearded Taliban official who was released from Bagram prison in mid-August professed ignorance about the protest that passed the area shortly before. Several pickup trucks with Taliban fighters, white bandannas with the Islamic profession of faith on their foreheads, were parked nearby as he spoke.

“In all of Afghanistan, everyone is happy, and the situation is better day by day," said the official, Mohammed Zindani. “All the people of Afghanistan want this government."