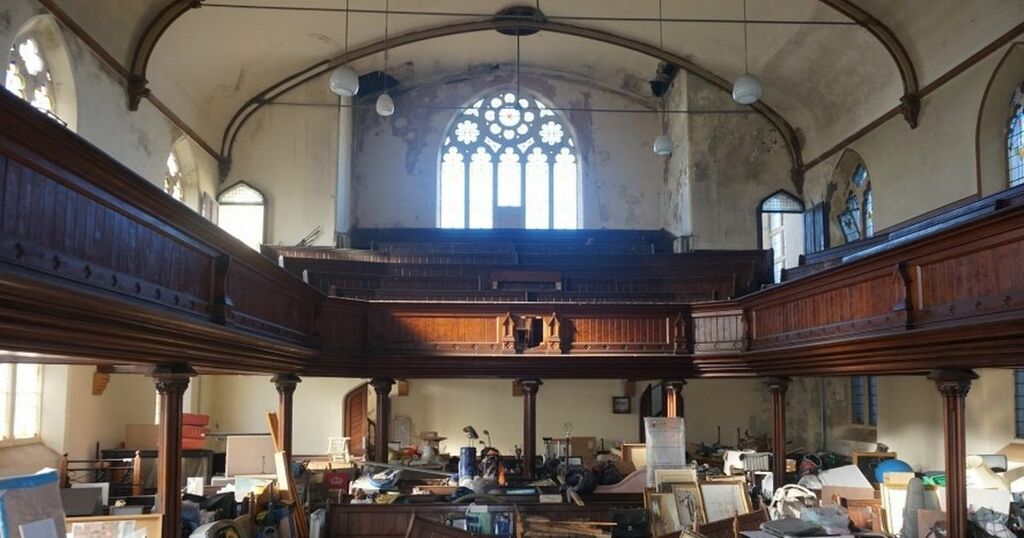 Abandoned church left in ruins transformed into beautiful mosque and community hub
The Grade II listed building has been given a new lease of life, and will soon be a base for…

Mum Aimee Ponsford said Kohen Jax, 3, is called Boris by his siblings and their friends due to his resemblance…

James Cleland, 66, aims to be head and shoulders above the rest when he trains at the Sovereign Grooming Academy…

Daily Record
One subscription that gives you access to news from hundreds of sites
Shanghai aims to reopen more businesses shut down by COVID-19 lockdown, Beijing battles on

For generations, there's been one constant for men living in a Swansea community. It doesn't matter if you're young or old, if you're living in the Brynhyfryd or Manselton area, chances are you've had your hair cut by one man on at least one occasion in your life.

Peter Hill has now been cutting hair for 50 years through his business Pete's Gentleman Hairdresser. Well-known for his excellent barber skills and friendly nature, he is perhaps even more renowned for his sense of humour and his choice of jokes. So much so that his online reviews reference his banter just as much as his haircuts. A selection read as follows: "Great barber, nice guy, terrible comic", "Pete is always ready with scissors and old jokes to keep the punters happy when waiting for a trim" and "Tells some really terrible jokes but a right laugh. Will give a good quality haircut."

It all started for Pete when he was aged 19. He "fell into" being a hairdresser for a living at Attilo's in Swansea city centre, travelling in from Llanedi at the time where he once lived. Then, an opportunity came up at his base in Llangyfelach Road, Brynhyfryd back in April 1972, and he's remained there ever since. His dad opened up a paper shop slightly further down the road. Get Swansea stories straight to your inbox with our newsletter.

READ MORE: Hair salon named one of the best in the UK

"It came up and I thought I would give it a go - if you last you last, if you don't you go and get a job in a factory," Pete said, looking back at the time he first decided to set up shop by himself.

"It was closed for six months before I took over, so it was about starting afresh really."

A lot of things have changed from that first day onwards. Men used to be able to get their haircut for just 25p, with boys prices set at 20p and 16p for pensioners. Nowadays it's £9.50 for men, £9 for boys and £7.50 for OAPs. And the hair styles have changed too.

"It rolls on - old fashion always comes in style in a cycle," Pete said. "It's the same with clothes. If you went home and looked in your granddad's photo album, you will see the same haircuts that are around today. Now there's a bit of gel, wax, moose, clay, but it's generally the same. The good thing is these days you can get your phone out and show what you want and say you want something like that. Before it would be a photograph.

"It was all one man bands back then, you'd have one shop - two shops max. If you come to me, you'd come because you want me to cut your hair. These days, elsewhere, you can have a favourite stylist and they may not be in.

"I have a bit of banter with the customers, I'm a bit of a wind up merchant and I like to crack a joke, talk football or whatever. It's the same as when you chat in the bar or chat in the pub with the landlord, it's the same sort of thing. What someone tells you in the chair, stays in the chair. To me, a barber's chair is a bit like a doctor's chair. Some people just want to talk and want someone to listen to them."

The 69-year-old's wife and children recently held a celebration to mark his 50th year in business, and there's now a photograph in the window which shows how the business looked all those years ago when he first opened.

"I've been told that it is a good achievement doing it for 50 years, but for me, it just feels like another day. You can look ahead a long time, but you look back and it feels like it's gone in a blip. You've got to take the good with the bad.

"I've got no plans to retire. I still enjoy it - I would be gone otherwise. It's a social life as well. It's good social interaction, and as long as my health keeps up, I will carry on."

Abandoned church left in ruins transformed into beautiful mosque and community hub
The Grade II listed building has been given a new lease of life, and will soon be a base for…

Mum Aimee Ponsford said Kohen Jax, 3, is called Boris by his siblings and their friends due to his resemblance…

James Cleland, 66, aims to be head and shoulders above the rest when he trains at the Sovereign Grooming Academy…

Daily Record
One subscription that gives you access to news from hundreds of sites
Shanghai aims to reopen more businesses shut down by COVID-19 lockdown, Beijing battles on