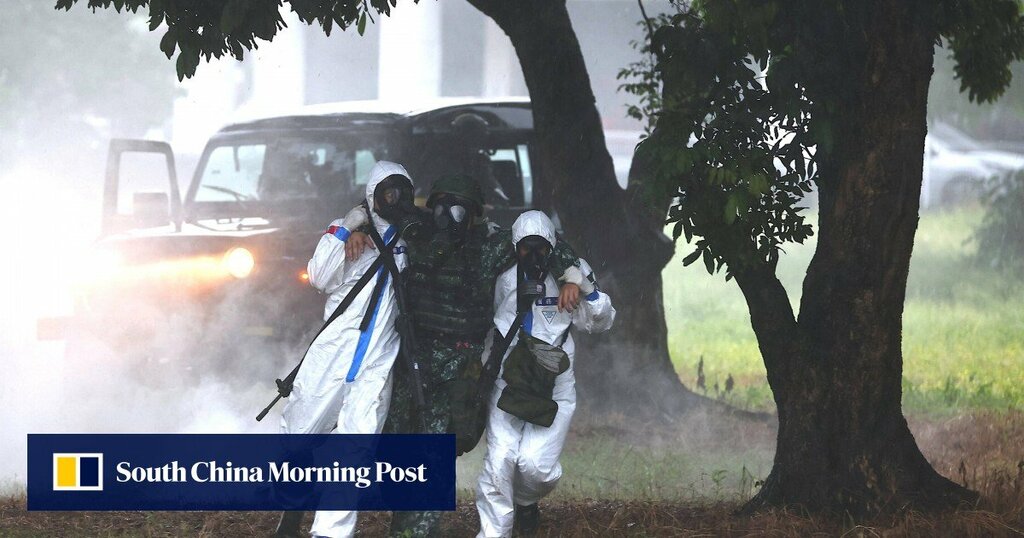 Taiwan has launched its most important annual war games to test its defences in the event of conflict with mainland China.

Tensions across the Taiwan Strait have shown no sign of abating, with mainland China’s People’s Liberation Army (PLA) sending warplanes to Taiwan’s air defence identification zone almost daily to ramp up pressure on the self-ruled island, which Beijing views as its territory.

The drills, which will include exercises at offshore islets, began with a test of the Taiwanese military’s coordinated medical ability to respond to simulated biochemical attacks from the PLA, according to Taiwan’s defence ministry.

Ministry officials said the forces would also be tested on their ability to preserve their combat strength in response to a simulated first strike from the PLA.

The drill involved flying various warplanes from their bases in western Taiwan to Jiashan base in the east for temporary shelter to preserve their combat power before launching an attack in response to the PLA. The planes included Mirage-2000s and F-16V fighter jets as well as E-2K airborne early-warning aircraft and P-3C submarine hunting planes.

Jiashan base, built inside a mountain in Hualien, is reported to have a 2,300-metre (7,500ft) taxiway allowing aircraft to move back and forth uninhibited. As Taiwan’s largest underground bomb shelter for aircraft, it has room for 200 fighters.

The navy and army tested combat preservation abilities by sending warships and tanks to designated bases from their original bases to prepare to attack, ministry officials said.

The military will also test night combat readiness and the forces’ anti-air, surface and sea capabilities over the next four days. Drills will include tests of the military’s ability to respond to a decapitation strike from the PLA, including a raid of the island’s presidential office.

On Wednesday, the air force will test emergency take-offs and landings of fighter jets on the Jiadong wartime runway – a major element of the exercises, according to the ministry.

Mainland China and Taiwan ‘on the brink of war’, think tank says

Warplanes will for the first time test emergency take-offs and landings on the Jiadong section of Provincial Highway No 1 in Pingtung, southern Taiwan – designated as a wartime runway for the air force. Taiwan has four other emergency landing strips on the Sun Yat-sen Freeway, all of which have been tested for similar emergency usability.

The drill would simulate a scenario in which Taiwan’s military and civilian airports and airstrips were seriously damaged by enemy fire, and jets have to land on the highway, military officials said.

Beijing has not renounced the use of force to take Taiwan. In addition to suspending official exchanges with Taiwan and poaching seven of its allies, it has stepped up military intimidation against the island by sending warplanes near Taiwan almost daily in the past two years to try to force Taiwanese President Tsai Ing-wen to accept the one-China principle.

The Financial Times reported on Friday that senior US government officials held a round of sensitive talks known as the “special channel” in Maryland with a Taiwanese delegation, which included Wu and Koo.

The report said the meeting was the first time the Joe Biden administration had engaged in high-level, in-person talks with Taiwan. Such meetings have traditionally been kept under wraps to avoid antagonising Beijing.

Taiwanese newspaper The Liberty Times said the Taiwanese delegation also included Hsu Szu-chien, the deputy secretary general of the security council, and a group of security and military officials. It said the delegation would stay in the US for a week.

Taiwan’s foreign ministry declined to comment on the reports. The reported meeting is expected to further upset Beijing, which has time and again warned the US against having official contact with Taiwanese officials and supplying arms to the island.