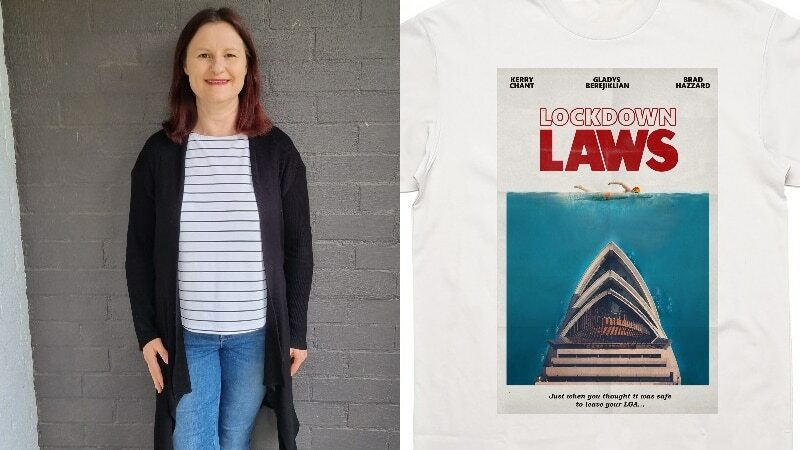 When ABC Radio Sydney Afternoons host James Valentine posed the question "if you could sum up this lockdown in one sketch or design, what would it look like?" Sydney responded.

Listeners to Afternoons were encouraged to come up with a design and enter a competition where their ideas could be selected and printed on a T-shirt with proceeds from the sale to go to charity.

Carby Tuckwell is a professional designer who helped judge the competition and said he found the spectrum of creativity among the 300-odd entries impressive.

When asked how many art competitions he has won, winner Doug Spence was blunt.

"This will be going up on the mantelpiece by itself," he said.

Mr Spence is a medical equipment technician by trade.

His artwork was inspired by the iconic band, Men at Work, and their hit Down Under.

"[James Valentine] mentioned [the competition] on the radio," he said.

He said he felt good about the money going to charity.

Ceri-Ann Ross is responsible for "that Opera House one".

The accountant went with a movie poster theme inspired by the film Jaws.

"I took an iconic movie poster," she said

"I've always thought that when you view the Opera House from a certain angle it kind of looks like a shark."

Her tagline highlights the conversation around Sydney's local government areas.

"A lot of the discussion has been about the LGA and I'm on the edge of an LGA that gets split into two — one side is an LGA of concern and the other side isn't."

Ms Ross was shocked that she came out on top.

She is happy to be doing some good in the world.

"There's so much at the moment that you feel that you can't control and you can't help, and you feel a bit helpless," Ms Ross said.

"And so just knowing and hoping that people get on board with this and buy the T shirts and wear my nerd humour with pride, that's all fantastic.

"Hopefully it raises lots of money for an incredibly important charity."

The competition attracted entries from professional artists, and their T-shirts are also available for sale.

Matthew Martin has won the Stanley and Walkley awards for his cartoons and has been a designer for surf brand Mambo.

He is no stranger to donating artwork and wanted to help out a local charity while providing some comic relief.

"The fish in the mask in the bowl is just something a little bit absurd," he said.

He wanted to highlight the fluidity of time during lockdown with his design.

"Lockdown has made me slow down and stop speeding ahead like a madman because there's nothing to speed toward, no deadlines or social engagements," he said.

"And while I miss normalcy, I wanted to point out that there's something nice about time being more wobbly and fluid."

Helping a charity that helps the community

With each T-shirt sold $12.50 will go to Community Care Kitchen, a grassroots charity dedicated to eradicating food insecurity.

Its president, Sana Karanouh, said she was extremely overwhelmed when selected and grateful for the recognition.

She said the money will help the charity carry out some vital work.

"When the lockdown was announced we put together a program that was more like an emergency appeal where we would deliver to people who were COVID-positive or in isolation," she said.

"[Now we have] the added pressure of having to look after people who were actually in a good financial position before the lockdown happened [who] suddenly found themselves without a job, without an income, without that support that they needed."

People wanting to wear a unique design and support Community Care Kitchen are invited to purchase a T-shirt.