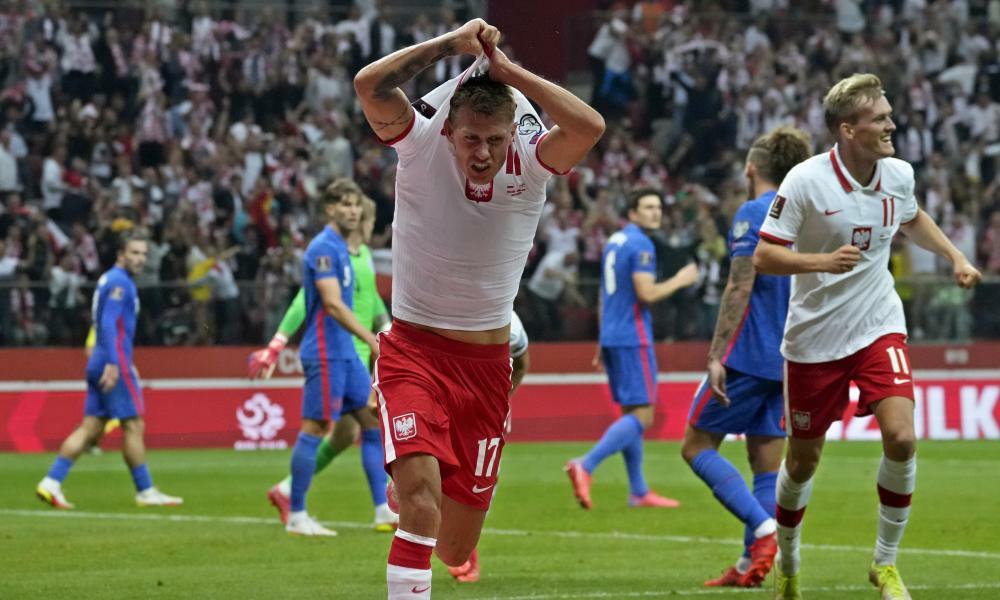 With 72 minutes on the clock, the thought occurred that Harry Kane had not had much service. It was partly because the England captain was trying to provide it for others, dropping back from his centre-forward’s position to pick his passes.

It was time for Kane to take matters into his own hands. The ball was worked to him at the top of the midfield and, with little on and Poland players backing off rather too respectfully, Kane unloaded with murderous intent.

The 30 yarder would have rearranged Jan Bednarek’s senses had it been slightly lower. Instead it flew over the centre-half before dipping and fading viciously away from Wojciech Szczesny’s left hand and into the bottom corner.

At that point England looked well set for the victory that would have virtually assured them direct qualification to the finals of the Qatar World Cup next year. It had been a performance of growing control amid a frenzied atmosphere at this magnificent arena.

England contained Poland in the first part of the first half, when the home team flew at them, and they were dominant when Kane registered his 41st international goal. Slowly but surely he is reeling in Wayne Rooney’s England record of 53.

Declan Rice was a tower of strength in central midfield and the late twist had not really been advertised – apart from when Jordan Pickford had an 82nd-minute clearance charged down by the substitute, Karol Swiderski. The ball spun towards his goal but he was able to get back and clear. Was not the goalkeeper supposed to have eradicated those lapses?

The collective breakdown would come at the very last and it was easy to question why Gareth Southgate chose not to make any substitutions – to shore things up or, even, simply to waste time. Did England’s 11 starters come to look a little leggy? Southgate chose not to introduce, say, Jordan Henderson to batten down the hatches and, with Paulo Sousa refreshing his Poland line-up with five changes, the post-mortem surrounding the equaliser will not be pleasant.

It came after Jakub Moder spun Kyle Walker to launch a Poland attack and England could not get out of trouble. Karol Linetty’s shot was blocked by Kalvin Phillips and, when the ball fizzed out left to Robert Lewandowski, his cross was a beauty, urging the substitute, Damian Szymanski, to attack it. He did so with a vengeance, bulldozing home his first goal for Poland.

And so England were unable to hold out and there was a rare blemish on their defensive record. So far this year there have been 11 clean sheets from them – equalling the all-time mark set in 1966. They had arrived in Warsaw having conceded only seven times in 25 games. But Polish joy knew no bounds and the stadium rocked in celebration. They had needed a result more than England in the quest to reach Qatar and, although it was not the victory they craved, it was something. They remain alive.

It was clear at the outset that the partisan crowd, who applauded the visiting anthem but roundly jeered the England players when they took the knee, would be a factor, raising their players and putting pressure on the referee, Daniel Siebert.

His decision to book Phillips early on for what looked like an accidental contact on Tymoteusz Puchacz was alarming from an England point of view, leaving the midfielder to tread a tightrope, and there were moments when Southgate’s attackers wanted free-kicks for fouls and did not get them. Jack Grealish, in particular, felt that his markers nibbled at him too readily. It was plain that Southgate was unhappy with the referee.

Tempers were never too far from boiling point. John Stones had heated words for Lewandowski when the striker went down as England held a high defensive line on an early free-kick and Harry Maguire felt the red mist descend after the half-time whistle. It was unclear in the moment what had provoked him but he was incandescent and had to be held back as players from both sides came together. TV pictures would show Kamil Glik pinching Walker. Maguire and Glik were booked.

England needed to dig in during the opening 20 minutes and keep Poland at arm’s length, which they managed to do, despite losing possession a couple of times. The home team were determined and physical but their only real flicker before the interval came on 29 minutes when Linetty lobbed through for Lewandowski, who got himself in front of Walker. The finish was tame.

England’s best moment of a limited first half crop came when Raheem Sterling blasted past Puchacz to cross but Kane, in behind Glik, could not get direction on his header.

England took higher starting positions in the second half, they pressed harder onto the front foot and were able to create overloads. The tone shifted. Grealish sent a cross-cum-shot past the far post and Maguire headed a Luke Shaw free-kick against the post.

Across the piece, England did not create enough and Southgate would lament an inability to get numbers into the box. Kane found a way around that but it was not enough.