By Layal Abou Rahal with Eric Randolph in Ankara

Beirut (AFP) - Syrian regime forces Wednesday advanced into the strategic town of Saraqeb, a war monitor said, despite a demand from Ankara that Damascus pull back its forces from Turkish-manned posts in Syria's last rebel enclave.

The demand came two days after clashes between Turkish and Syrian troops killed more than 20 people in the northwestern province of Idlib, testing uneasy relations between rebel backer Turkey and government ally Russia -- key foreign powerbrokers in the country's conflict.

The UN Security Council is to hold an emergency session on Thursday following requests from the United States, Britain and France, diplomats said.The UN envoy for Syria, Geir Pedersen, is expected in New York to report on the situation in Idlib.

"If the regime does not pull back, Turkey will be obliged to take matters into its own hands," Turkish President Recep Tayyip Erdogan told a meeting of ruling party lawmakers in Ankara, giving Syria until the end of the month to comply.

Syrian regime forces continued to pound Idlib on Wednesday, as part of an offensive which has killed 300 civilians since December and displaced 520,000 people.

Regime forces penetrated Saraqeb, a town in the province that they had been seeking to encircle for days, according to the Syrian Observatory for Human Rights.

He said government forces had "begun to comb districts of Saraqeb and are on the point of taking control of the all of the M5 road", while jihadists had withdrawn to a village north of the town.

According to state television, "units of the Syrian Arab Army have encircled the town of Saraqeb on three sides" and were positioned over the nearby junction of the key M4 and M5 highways.

Syrian troops have seized more than 20 towns and villages from rebels and jihadists in 48 hours, according to the Observatory and state news agency SANA.

The Observatory said Russian air strikes killed three civilians -– all members of the same family -– on the outskirts of Idlib city on Wednesday.

Regime rocket fire killed another civilian in the town of Anjara in the west of neighbouring Aleppo province, the monitor said, while SANA reported four civilians dead in rebel fire on the provincial capital.

Erdogan said two of Turkey's 12 so-called observation posts in Idlib, set up under a 2018 agreement with Russia, were now "behind the regime's lines".

The post at Morek was surrounded by forces loyal to Syrian President Bashar al-Assad in December and another at Surman now lies within the regime's area of control.

Monday's clashes -- the bloodiest since Ankara sent troops across the border to Syria in 2016 -- prompted Erdogan to ask Moscow, the key backer of Assad's regime, to "better understand our sensitivities in Syria".

He spoke with his Russian counterpart Vladimir Putin on Tuesday and warned that Ankara would respond "firmly" to any new Syrian attack.

Syria's military command, for its part, has said the presence of Turkish forces was "illegal and a flagrant act of aggression", vowing to respond to any Turkish attack, SANA reported.

Erdogan said the clashes amounted to a "new era" in Syria, and that any further attacks on Turkish forces would be "responded to in kind".

"The air and ground elements of the Turkish armed forces will freely move in the Idlib region and if needed will launch an operation," he added.

A Syrian foreign ministry source lashed back at Erdogan's "lies and deceit".

The mass displacement of civilians in Idlib --one of the largest since the 2011 start of a conflict that has displaced more than half of Syria's pre-war population of 20 million -- has coincided with a biting winter.

Turkey, which already hosts some 3.7 million Syrian refugees, says it wants to prevent a further influx.

The latest clashes have tested the tricky balancing act between Turkey and Russia, who support opposing sides but have attempted to broker political solutions in Idlib.

A fragile ceasefire was brokered by the two countries in 2018, under which Ankara agreed to contain extremist elements among Syrian rebel forces.

But Syria's former Al-Qaeda affiliate, Hayat Tahrir al-Sham, has since consolidated its position as the main anti-regime faction on the ground, at the expense of Ankara-backed rebel forces.

Jana Jabbour of Sciences Po in Paris said that Russia and Turkey needed "to cooperate...because they are economically interdependent".

Their priority, she told AFP, was to ensure a "regional solution, designed by Moscow and Ankara, as opposed to an international solution parachuted in by the West". 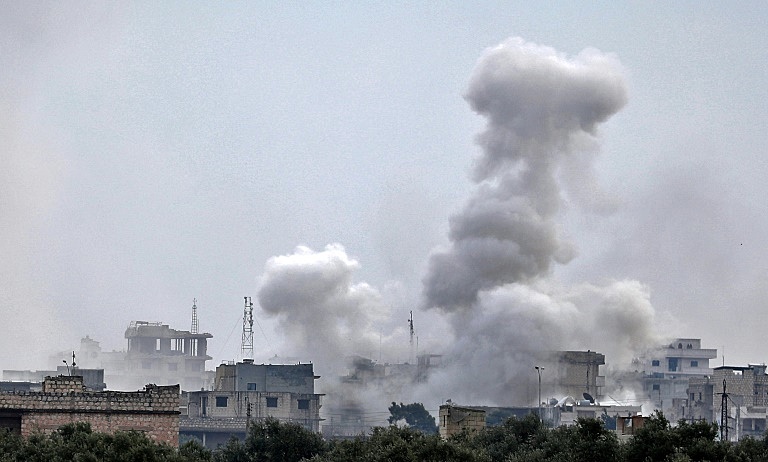 AFP
From analysis to the latest developments in health, read the most diverse news in one place.
Syria regime seizes swathes of key town in Idlib offensive

AFP
Erdogan warns Syria to back off from Turkish outposts

Istanbul (AFP) - Ankara demanded on Wednesday that Damascus pull back from Turkish-manned posts in Syria's last rebel enclave, after…

AFP
Erdogan urges Syria to back off Turkish observation posts

Asharq Al-Awsat
One place to find news on any topic, from hundreds of sites.
Syria regime, rebels battle for highway town: monitor