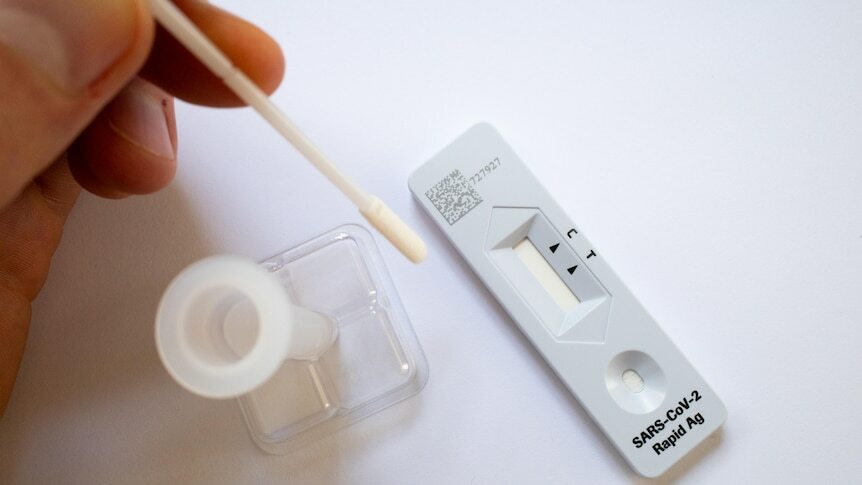 Penalty is about 'messaging'

The NSW Customer Service Minister admits imposing a $1,000 fine for not reporting a positive rapid antigen test (RAT) is largely about messaging, and will be difficult to police.

Victor Dominello said if there was no penalty for failing to register a positive RAT through Service NSW, the government would be accused of not taking the situation seriously.

"So many of the calls we've made in the last two years have been lineball calls. The argument would have been equally powerful the other way. If we didn't put a fine on it, then people would say you're not taking it seriously," he told Nine Radio.

As of yesterday, it is mandatory to record positive RATs through the Service NSW app or website.

The Refugee Action Coalition (RAC) says more immigration detainees inside the Villawood detention centre in Sydney's west have tested positive to COVID-19 but detainees are being kept in the dark about the size of the outbreak.

Since the initial five cases in the Mackenzie and Mitchell compounds, seven more people have tested positive in the Lachlan compound.

A further person in the Mitchell compound has been taken to hospital where they have tested positive.

This makes 13 cases but RAC spokesperson Ian Rintoul says there are thought to be many more.

"We are still waiting for Serco and Border Force to come clean about the Villawood outbreak," Mr Rintoul said.

"There have been no measures taken to remove the most vulnerable people from the high-risk detention centre. The government has spent a lot of time, energy and hundreds of thousands of dollars trying to keep one tennis player out of Australia, but is doing nothing to get the vulnerable people at risk of infection in Villawood out of detention. "

Two men and two women were arrested as strike force detectives, assisted by Raptor Squad officers, moved in as part of an ongoing investigation into the alleged money laundering and drug supply of a criminal network.

During a search of a Rhodes unit police allegedly discovered $3.1 million in cash in the apartment and $4.78 million stashed in the boot of a car in an underground car park.

Drugs including methylamphetamine and MDMA, along with $260,000 in cash, were also allegedly found at a Campsie address linked to the investigation last week.

A man, 32, and two women, aged 30 and 48, will face court today charged with dealing with the proceeds of crime, drug and other offences.

A woman reported missing from Sydney’s south-west yesterday has been located safe and well.

She left for a walk but did not return and her family held concerns for her welfare as she has dementia.

Following inquiries, she was located at a park in Gillies Street, Annandale, just after 3:30pm on Wednesday.