World number one Iga Swiatek on Saturday equalled Serena Williams' feat of 27 straight victories when she pulverized third seed Aryna Sabalenka 6-2, 6-1 to reach the final of the Italian Open in Rome.

The 20-year-old Pole will play either the ninth seed Ons Jabeur from Tunisia in Sunday's final after she saw off the unseeded Russian Daria Kasatkina 6-4, 1-6, 7-5.

Swiatek's path to her fifth straight WTA final took just over an hour as the big-hitting Sabalenka imploded.

Swiatek romped through the first set in 30 minutes and the 2020 French Open champion continued the pitiless assault as she raced into a 4-0 lead in the second.

Sabalenka took a medical time-out with the Swiatek leading 4-1.

But the break failed to change the 24-year-old Belarusian's fortunes.

Swiatek took the next two games to equal Williams' sequence which started in the round robin stages of the 2014 WTA championships.

As well as that title, Williams won the 2015 Australian Open and the Miami Open.

Petra Kvitova brought the run to an end in the semi-finals at the Madrid Open.

"At these tournaments where we play day after day, we don't really get time to celebrate," Swiatek said of her sequence.

"Right after we finish the previous match, we have to think about the next one. It's pretty tough. But I know that after we've finished, I'm going to be really proud of myself."

Sabalenka hit 31 unforced errors in her third consecutive defeat to Swiatek who beat her in the quarter-finasl en route to the Doha Open crown in February and in the final of the Stuttgart Open in April.

Swiatek also claimed the "Sunshine Double" earlier in the spring with wins over Maria Sakkari in Indian Wells and Naomi Osaka in Miami.

"I'm just constantly surprising myself that I can do better and better," she added. "I feel like I actually can believe now that the sky's the limit. That's the fun part, for sure."

In the men's draw, five time champion Novak Djokovic advanced to the final with a 6-4, 6-3 victory over the fifth seed Casper Ruud. 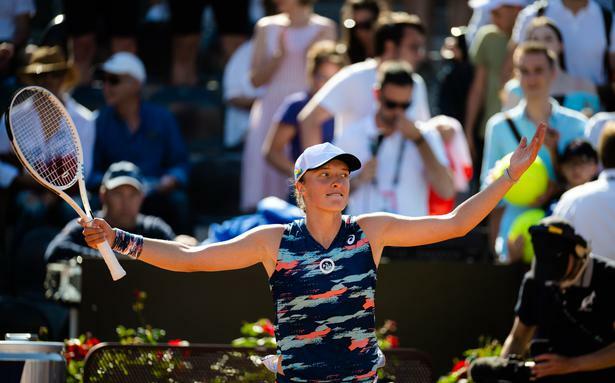