Sweden and Finland have formally submitted their applications to join Nato but Turkey blocked an early move to fast-track the Nordic countries’ requests, demanding they extradite “terrorists” and that the alliance respect its concerns.

The Nato secretary general, Jens Stoltenberg, accepted the two historically non-aligned Nordic countries’ membership requests, each in a white folder embossed with their national flag, at the US-led defensive alliance’s HQ in Brussels on Wednesday.

“I warmly welcome the requests by Finland and Sweden to join Nato. You are our closest partners,” Stoltenberg told the two countries’ ambassadors, hailing the occasion as “a historic step” and “a good day at a critical time for our safety”.

However, multiple reports cited diplomatic sources as saying Turkey later blocked a vote by Nato ambassadors on opening talks immediately, suggesting the first stage of the accession process may take longer than the two weeks the alliance planned.

The enlargement of Nato must be approved by all 30 members and then ratified by their parliaments, which could take up to a year. The alliance has said it wants to move as fast as possible given the potential Russian threat to Finland and Sweden.

The two countries’ applications represent a radical redrawing of Europe’s security landscape in the wake of Russia’s invasion of Ukraine and, if successful, would represent the most significant expansion of Nato in decades, doubling the alliance’s border with Russia.

Stoltenberg said Nato would “take into account the security interests” of all members and was “determined to work through the issues and reach rapid conclusions”. All allies agreed on the importance of enlargement, he said, adding: “We all agree we must stand together and that this is an historic moment we must seize.”

In Ankara, however, President Recep Tayyip Erdoğan told MPs from his AK party the alliance must respect Turkey’s reservations. “Nato expansion is only meaningful for us in proportion to the respect that will be shown to our sensitivities,” he said.

Turkey accuses Sweden and Finland of harbouring members of Kurdish militant groups it considers terrorist organisations, and also objects to their decisions in 2019 to ban arms exports to Ankara over Turkey’s military operations in Syria.

Erdoğan accused Stockholm in particular of providing safe haven to members of the outlawed Kurdistan Workers’ party (PKK) and to followers of Fethullah Gülen, who Ankara accuses of orchestrating a 2016 coup attempt. “We asked them to extradite 30 terrorists, but they refused to do so,” he said.

“So you won’t give us back terrorists, but you ask us for Nato membership? Nato is an entity for security, an organisation for security. Therefore, we cannot say ‘Yes’ to this security organisation being deprived of security,” he added.

Erdoğan said Nato had never supported Turkey in its fight against the PKK and other Kurdish militant groups, and accused allies of supporting terrorists, citing allied arms deliveries to the People’s Defence Units (YPG), a Kurdish militia fighting in Syria.

Other Turkish officials, including Erdoğan’s spokesperson, have been less outspoken, saying Turkey has not shut the door to Sweden and Finland joining Nato but wants negotiations and a pledge to clamp down on what it sees as terrorist activities.

Nato, the US and other allies, as well as Helsinki and Stockholm, have all said they are optimistic they can overcome Turkey’s objections. Analysts believe Erdoğan, who faces elections next year, is largely seeking concessions to score domestic political points and is ultimately unlikely to veto the two Nordic applications.

In the hope that speedy ratification by the US would help advance the process, the Swedish defence minister has already headed to Washington. The Turkish foreign minister, Mevlüt Çavuşoğlu, met the US secretary of state, Antony Blinken, in New York on Wednesday, but the two diplomats did not address the question of Nato enlargement in their joint statement which reaffirmed their cooperation as partners and Nato allies, and committed them “ to working closely together to face current geopolitical challenges”.

The Finnish president, Sauli Niinistö, and Sweden’s prime minister, Magdalena Andersson, will meet the US president, Joe Biden, on Thursday.

In a statement, Biden said he strongly supported the two countries’ application, adding that he would work with the US Congress and Nato allies “to quickly bring Finland and Sweden into the strongest defensive alliance in history”.

Finland’s prime minister, Sanna Marin, said on a visit to Rome that she hoped alliance members would move “as soon as possible” to ratify the applications. “I think this is the key issue when it comes to security, as fast a ratification process as possible is the best security guarantee for Finland and for Sweden at this stage,” she said.

Germany said on Wednesday it would push for the quickest possible accession of Sweden and Finland to Nato. “In these two countries, we gain two valued and capable allies who will further strengthen the defence capability of our alliance,” a government spokesperson said.

Rome also said it strongly supports Finland’s and Sweden’s applications and was willing to speed up procedures for the two countries to join as soon as possible, the Italian prime minister, Mario Draghi, said, calling the applications “a clear response to the Russian invasion of Ukraine and the threat it poses to peace in Europe”.

Moscow’s response has so far been muted, with the Russian president, Vladimir Putin, describing Finland’s and Sweden’s accession as not a threat in itself. Only the deployment of military infrastructure on their territories would provoke a response, Putin said. 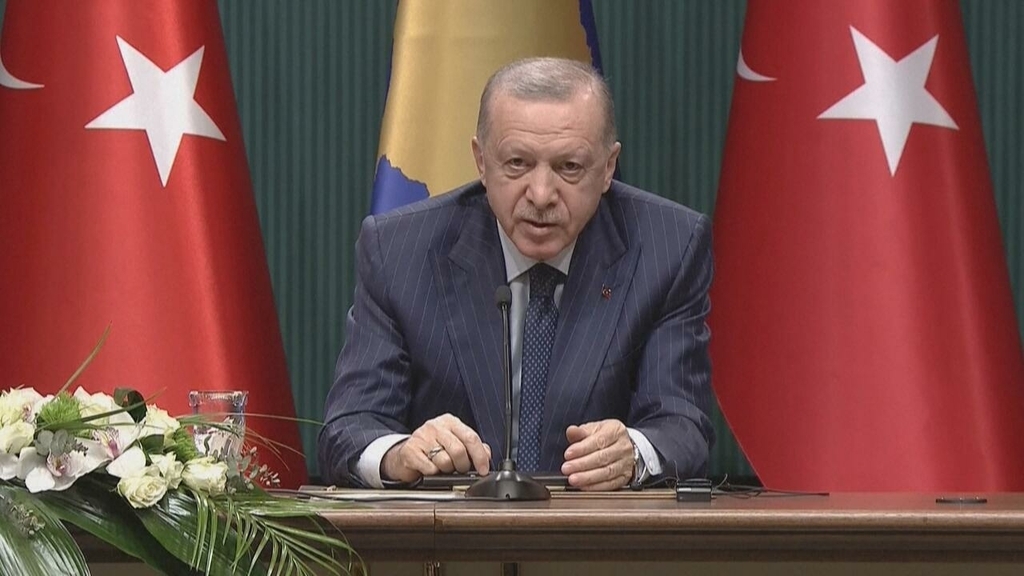 France 24
One subscription that gives you access to news from hundreds of sites
Turkey blocks Finland, Sweden NATO talks