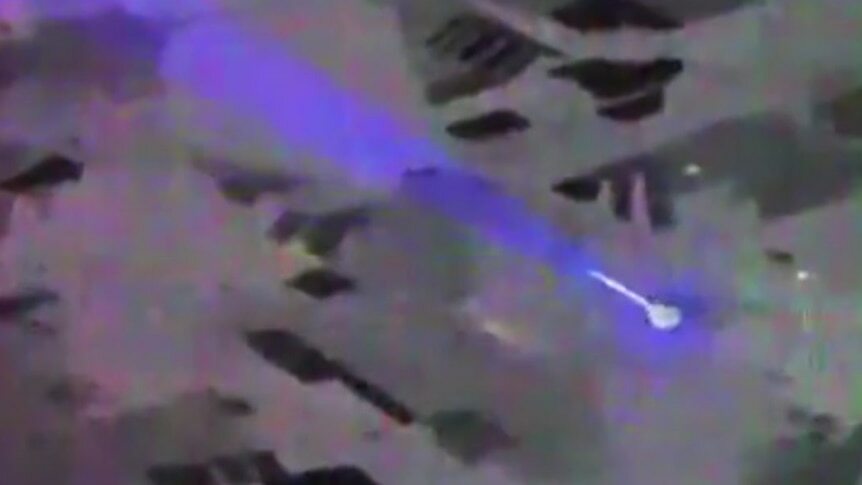 The District Court heard the 49-year-old Woodcroft man pointed the powerful laser at the helicopter seven times on November 20, 2020.

The police helicopter carrying two SA Police officers was being used to conduct COVID-19 compliance checks during the three-day lockdown.

Chief Judge Michael Evans said the pilot noticed a bright blue laser light being pointed at the helicopter a short time after liftoff from Adelaide Airport.

"The laser made it difficult for one of the police officers to see and had a dazzling effect on him," he said.

Golka, a former boilermaker and a father-of-two, was arrested a short time later and charged by police.

Prior to the incident, Golka was made redundant during COVID-19 and obtained work at a labour hire company where he injured his back.

He received ongoing treatment for his back injury and had been on different prescription medications for the pain.

The court heard that Golka was under the influence of alcohol combined with his pain medication at the time of the offending and it may have contributed to difficulties with his thinking, judgement and decision-making.

"I accept that at the time of the offending you were not coping well with being on WorkCover and being constantly restricted by your back injury," Chief Judge Evans said.

"I further accept that your judgement may have been affected by a combination of alcohol and your prescription medication however that is no excuse to having committed these offences."

Offending could have been 'catastrophic'

Chief Judge Evans sentenced Golka to 15 months in prison but suspended that term.

"If the laser beam had gone directly into the pilot's eyes, the immediate safety of the aircraft and its occupants would have been compromised."

Golka signed a two-year good behaviour bond and will be under the supervision of a community corrections officer for 18 months.

He will also be required to carry out 80 hours of community service.

Outside court, his lawyer, Craig Caldicott, apologised on behalf of his client, saying he was sorry for his actions.