Supreme's braided Clarks Wallabee is the perfect shoe for fall 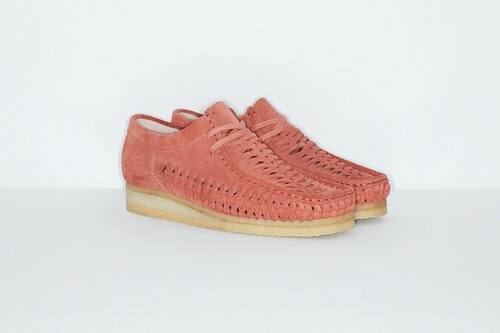 The Clarks Wallabee is one of Supreme’s recurring collaborations, and this year the streetwear king has tinkered with the silhouette more than ever. Letting the shoe breathe, Supreme has added huarache-like braids to the classic suede upper. The openings down the vamp and wrapping around the majority of the shoe just above the midsole transform the boot into something like a sandal — which will make it a great choice for the transitional weather ahead.

We recently rounded up some of the best sneaker alternatives to rock this fall, and the Clarks Wallabee has long been a silhouette beloved by New York City and hip-hop culture. The shoe has been a through-line from the Wu-Tang Clan to Kanye West, and last year Nas donned pairs as part of the campaign for Aimé Leon Dore’s collaboration.

Wallabees are super versatile, as Supreme showed by styling them with jeans and track pants, and you’d be hard-pressed to find a pant they won’t work with. And with how popular sandals have become, Supreme’s collaboration will allow you to feel the breeze on your toes after summer has come to an end.

Clarks, a nearly 200-year-old brand, first introduced crepe soles in the ‘50s and has been using them on the Wallabee since it launched in 1960. The process for creating the natural rubber soles creates thousands of tiny air bubbles within the material that provides more shock absorption than its appearance suggests.

The leather upper, meanwhile, will quickly mold to your foot for a unique fit. Wear them for a few days and you’ll see why old heads have been rocking Wallabees since the Wu first came out of Staten Island.

Supreme’s braided take on the Clarks staple is slated to release at 11 a.m. ET on Thursday, September 9, as part of its weekly drop. You’ll be able to get them in-stores or online — and if it's your first pair of Wallabees, don’t expect it to be your last.