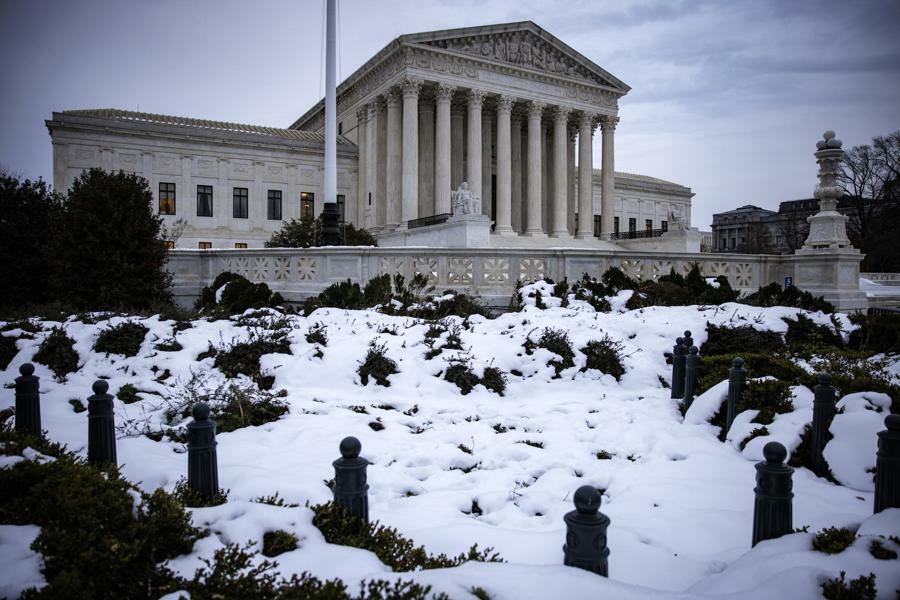 The Supreme Court heard arguments Friday over the federal government’s workplace vaccine requirements, with key conservative justices signaling they may be willing to temporarily block President Joe Biden’s vaccine-or-test mandate for large private employers—but could be more open to a separate mandate for healthcare workers.

The Supreme Court heard oral arguments in challenges to two federal mandates: one requiring all private employers with more than 100 employees to mandate vaccines or regular Covid-19 testing, and another requiring vaccines for healthcare workers at facilities participating in Medicare and Medicaid.

During the private employer hearing, Chief Justice John Roberts questioned the Biden Administration's strategy of using different agencies — like the Department of Labor and Health and Human Services — to implement vaccine mandates as a "work-around" to issuing a federal vaccine mandate without congressional approval.

Justices Brett Kavanaugh and Amy Coney Barrett appeared to express some sympathy with the challengers — business groups and GOP-led states — with Barrett asking a lawyer if they believed the mandate was too overbroad in its scope and Kavanaugh suggesting he could side with the view that the issue should be left up to Congress, not the executive branch.

Barrett also questioned whether the federal government was justified in imposing the vaccine-or-test mandate as an emergency rule, rather than a regular rule that would require a public comment period and greater scrutiny before it could be implemented.

Key justices appeared potentially more sympathetic to the healthcare mandate, however, with Kavanaugh noting that Republican state officials were challenging the requirement, but the medical facilities actually affected by the mandate “in fact overwhelmingly appear to support” the rule.

Barrett said she disagreed that statutes for certain medical facilities the Biden administration used to justify the policy actually support their case, however, suggesting she may favor limiting the mandate to apply only to some healthcare facilities and not others—a position the Biden administration said would be acceptable, as more than 90% of healthcare workers work in facilities they believe would pass Barrett’s scrutiny.

Roberts also suggested he may believe the Occupational Safety and Health Administration (OSHA) can legally issue its vaccine-or-test mandate, asking an attorney arguing against it, “Why wouldn’t OSHA have the authority” to issue the most effective measure possible against Covid-19 by requiring vaccines or tests.

The healthcare worker and private employer mandates are two of four such requirements the Biden administration has imposed, along with mandating vaccines for federal contractors and employees. The policies have garnered heavy controversy even as polls show most Americans approve of them. The large employer mandate was reinstated by the 6th Circuit Court of Appeals on December 17 after the 5th Circuit blocked it in November, prompting more than 10 challenges to be filed at the Supreme Court. Biden’s healthcare worker mandate, which applies to those working at facilities that participate in Medicare and Medicaid, is now blocked in a combined 24 states. The Supreme Court has previously upheld a number of smaller vaccine mandates, including state-level requirements for healthcare workers in New York and Maine.

Whether the private employer policy will start being enforced before the court rules, though the challengers have asked for a decision before then. The vaccine-or-test mandate for large employers already took effect Tuesday, but the Department of Labor said it will not start penalizing employers who don’t comply with the policy until January 10, or before February 9 for the testing requirements. The healthcare worker rule was due to go into effect January 4, but federal health officials said in late December it will not start enforcing the policy until January 27 for the first phase (in which workers must have received at least a first dose of the vaccine) and February 28 for the second.

Two of the attorneys arguing against the mandates, Ohio Solicitor General Benjamin Flowers and Louisiana Solicitor General Liz Murrill, participated in the hearing Friday remotely because they tested positive for Covid-19, Reuters reports. Supreme Court Justice Sonia Sotomayor, who is at higher risk for severe complications for Covid-19, also participated remotely. All Supreme Court justices are fully vaccinated and boosted, and the court requires attorneys arguing before the court to test negative for the virus.

Biden’s federal contractor mandate has also wound up in court, and was temporarily blocked in federal district court in early December. The 11th Circuit Court of Appeals declined to reinstate the mandate, but the case has not yet made it to the Supreme Court.