The Supreme Court on Wednesday suspended pending criminal trials and court proceedings under Section 124A (sedition) of the Indian Penal Code while allowing the Union of India to reconsider the British-era law.

"All pending trials, appeals and proceedings with respect to the charge framed under Section 124A of the IPC be kept in abeyance," a three-judge Bench led by Chief Justice of India N.V. Ramana ordered. It was argued in court that about 13,000 people were already in jail under the sedition provision.

However, adjudication with respect to other Sections of law, if any, would proceed if the court concerned was "of the opinion that no prejudice would be caused to the accused".

The court also made it clear that it "hopes and expects" the Centre and States to restrain from registering FIRs, continuing investigations or take coercive measures under Section 124A while the "reconsideration" of the colonial provision was on.

Adding a fail-safe to protect civil liberties against any future misuse of Section 124A while it was under the Union's microscope, the court ordered that the persons accused in fresh cases were free to approach courts, which would consider their cases taking into account the order of the Supreme Court and the "clear" stand of the Union that the provision was abused and needed "re-examination".

The court, meanwhile, gave the Union of India liberty to issue a directive to States and authorities to prevent the continued misuse of the sedition law.

The apex court order would act as a powerful message against the rampant misuse of the sedition law by governments to silence dissent and violate personal liberty. Undertrials booked under Section 124A can now use the order to seek bail.

The court listed the sedition case for the third week of July.

The order came after the Centre, represented by Solicitor General Tushar Mehta, acknowledged that the law was not in tune with the current times. The government had urged the court to pause its hearing of a batch of petitions challenging Section 124A until the government completed its "reconsideration process" of the sedition provision."

It is clear that the Union of India agrees with the prima facie opinion expressed by this court that the rigours of Section 124A of the IPC is not in tune with the current social milieu, and was intended for a time when this country was under the colonial regime. In light of the same, the Union of India may reconsider the provision of law," the Supreme Court observed in its 10-page order.

The Bench, however, did not give a deadline for the reconsideration exercise, aware that it may involve legislative process.

The court's interim order is expressly a balancing act. "This court is cognisant of security interests and integrity of the state on one hand, and the civil liberties of citizens on the other. There is a requirement to balance both sets of considerations, which is a difficult exercise," it observed.

The court recounted how the petitioners had argued that the provision dated back to 1898 and even pre-dated the Constitution.

It also referred to Attorney General of India K.K. Venugopal's submissions about "glaring instances of abuse of Section 124A" like the recent booking of persons under sedition for chanting the Hanuman Chalisa.

In the morning, prior to the delivery of the order, Mr. Mehta had submitted that Section 124A represented a cognisable offence and the authorities could not be prevented from registering cases under the provision.

He had however proposed that a senior officer at the level of the Superintendent of Police (SP) could scrutinise the facts of individual cases prior to registration of FIRs in a bid to prevent abuse.

Mr. Mehta had said that there could not be a blanket ban or freeze in the prosecution of pending cases under Section 124A.

"We do not know the gravity of offences involved in these cases... Some may also involve charges of terrorism and money-laundering," Mr. Mehta argued.

He said the accused in these pending cases could individually approach the courts for relief. "There is no reason to distrust the judicial process," Mr. Mehta said.

He said bail applications under Section 124A could also be heard expeditiously. The law officer urged the court to pronounce an interim order on the lines proposed by the government until the re-consideration of the sedition law was completed.

Senior advocates Kapil Sibal, Gopal Sankaranarayanan along with advocates P.B. Suresh, Kaleeswaram Raj and S. Prasanna, for the petitioners, had objected to the Centre's proposal.

"Section 124A is per se unconstitutional... We have not come to court for a stay of the provision. We want the court to strike it down," Mr. Sibal contended.

"The Centre says an SP can do pre-FIR registration scrutiny... You have anyone else in mind to do it?" Justice Kant asked the senior lawyer.

"We don't want to go to anyone... The Section is itself unconstitutional," Mr. Sibal replied.

"You want us to declare Section 124A unconstitutional today itself... Don't answer like that," Justice Kant shot back.

Justice Kohli intervened to explain that the court was "only exploring what the situation should be in the interregnum". After this, the Bench retired to their chambers to discuss and prepare the order.

On Tuesday, the court had indicated a willingness to pause its hearings until the government re-examined the law of sedition. However, the court had wanted a clear answer by Wednesday on how it intended to protect the interests of people already arrested and facing prosecution under Section 124A. The court had further sought the government’s response on whether the use of the British-era law could be suspended in view of the reconsideration process.

The twist in the sedition case was brought about by an affidavit filed by the Centre on May 9 that it would re-examine Section 124A, inspired by Prime Minister Narendra Modi's "belief" that the nation should work harder to shed "colonial baggage", including outdated laws, while celebrating 75 years of Independence under the banner ' Azadi Ka Amrit Mahotsav'. 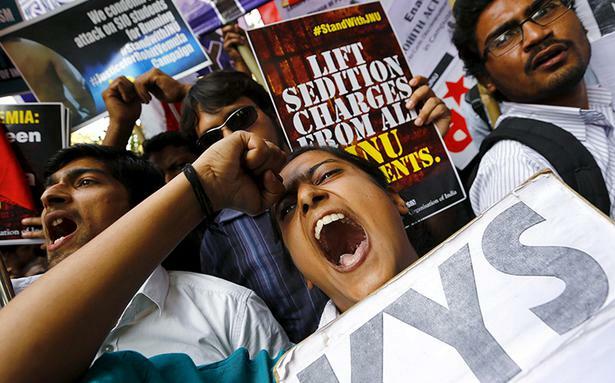 Supreme Court seeks interim protection for people charged with sedition
Court gives 24 hours for response from Centre, which plans to re-examine the law.

Livemint
Supreme Court puts the sedition law on hold, no new FIRs to be lodged