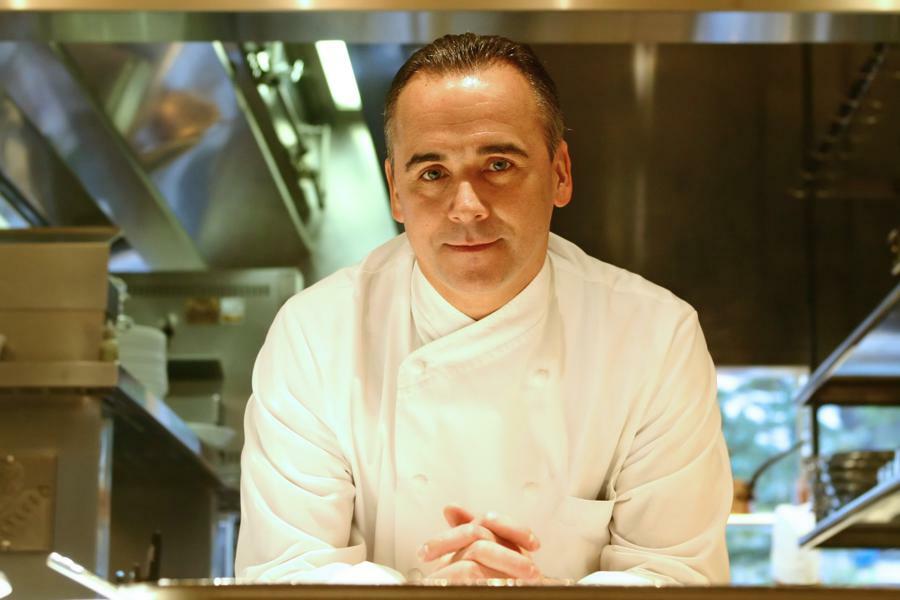 When you receive an invitation to dine with a legendary, Michelin-starred Chef, you immediately jump at the opportunity. Such was the case this week as I spent the evening with one of the world's most gregarious and charming masters of cuisine.

Jean-Georges Vongerichten is a whirlwind of energy as he prepared my feast at his stunning restaurant at the Waldorf Astoria in Beverly Hills. He was in Los Angeles for the first time in two years to work alongside Chef Steve Benjamin and the team on seasonal menu changes for Jean-Georges Beverly Hills and The Rooftop by JG, his first West Coast restaurants.

I sat down for an exclusive interview with the acclaimed Chef to talk about working during the pandemic and how his restaurant empire is continuing to expand worldwide.

Born and raised on the outskirts of Strasbourg in Alsace, France, Jean-Georges’ father was in the coal business. The coal was transported from mines in the north of France on barges pulled by horses, and eventually, the family business moved on to heating oil. “My mom cooked every day with my grandmother,” he says, “We had a little company distributing coal, so she was cooking for three generations of people living under the same roof. Our house was built in 1870, and it's the same house where my mother lives and where we grew up. "

For his 16th birthday, his family took him to the Michelin starred Auberge de l'Ill, run by acclaimed chef Paul Haeberlin. "I remember my father would often say, 'my son is good for nothing.' He took over the coal company from my grandfather, and he wanted me to do the same, but I had no interest. I was bad in school. I refused to follow in his footsteps, and he was mad. So when my father saw my eyes open up in the restaurant that night, he asked the chef if he needed someone to scrub the dishes."

Chef Haeberlin showed interest in the boy and told his father they were looking for an apprentice. The finest restaurants in France would often bring on an unpaid apprentice for three years back then. He began washing dishes and loved every minute of it, eventually moving into a room above the restaurant. “My father thought I would just be washing dishes. I never did,” he says. “They put me to work immediately working in the kitchen. I was picking up the milk at the farm in the morning, and I learned everything, all the trade." It wasn't until he received his first Michelin star that his father finally admitted his son had done something with his life.

In his early 20s, Jean-Georges left for Munich to work under the acclaimed Austrian chef Eckart Witzigmann. He then went on to work under Paul Bocuse and Master Chef Louis Outhier at L'Oasis in southern France. Jean-Georges traveled to Asia and continued his training at the Oriental Hotel in Bangkok, the Meridien Hotel in Singapore, and the Mandarin Hotel in Hong Kong. During the time he spent working and traveling throughout Asia, Jean-Georges developed his love for the exotic flavors of the East.

Today Jean-Georges lives full time in the West Village in New York and also owns a former olive oil mill he converted into a home in the South of France in Mougins. He continues to be involved in every aspect of his burgeoning 40 restaurants around the world, from concept, menu to architectural design. He continued to work straight through the pandemic by actually opening two restaurants via Zoom: L’Italien and L’Asiatique at the famed La Mamounia hotel in Marrakesh. “We hired two chefs and a manager this way. We trained the entire kitchen staff with videos and recipes over video calls.”

Still, it has been difficult as a Chef during the pandemic when everything shut down. “My source of inspiration is through traveling,” he says, “So I miss going to China three times a year, to Shanghai, Singapore and Tokyo. Whenever I came back, I would bring 20 new dishes and 40 new ideas.”

Between a decadent eight courses of Ossetra Caviar, King Crab, Roasted Badger Flame Beets, Steamed Halibut, and Grilled Wagyu Beef, Jean-Georges was eager to share a slew of his new properties opening later this year and into 2022, including Monaco, Kyoto, Nashville, and New York.

The Maybourne Hotel Group—operators of Claridge’s, The Connaught, and The Berkeley in London and The Maybourne Beverly Hills in Los Angeles launch their fifth hotel this year with The Maybourne Riviera on the Côte d’Azur, France. Jean-Georges will launch his first outpost in the South of France, with cuisine inspired by the hotel’s location on the French Italian border.

The Hermitage Hotel in Nashville has Jean-Georges revamping the hotel’s entire culinary program while the hotel also sees design updates throughout. The iconic Capitol Grille will be replaced by the contemporary restaurant Drusie & Darr, showcasing regional produce and a chic cafe-cocktail bar called The Pink Hermit.

The historic Fulton Fish Market was the Tin Building in the South Street Seaport and will soon become a 53,000-sq.-ft. fresh food market run by chef Jean-Georges. He will operate around six restaurants in the complex, including Chinese (The House of the Red Pearl), Italian, a raw bar, a sushi bar, a beer garden, a taco restaurant, a vegan restaurant, and a candy store. They will also feature a private cooking space for visiting Chef collaborations and events.

Partnering up with The Connaught Hotel Group, the new Ryokan style hotel will only have nine rooms making this one of the most exclusive properties in Japan. Located overlooking the Kamo River, the new Japanese restaurant within the hotel will be run by Jean-Georges with only 18 seats featuring a sushi counter and a patisserie.