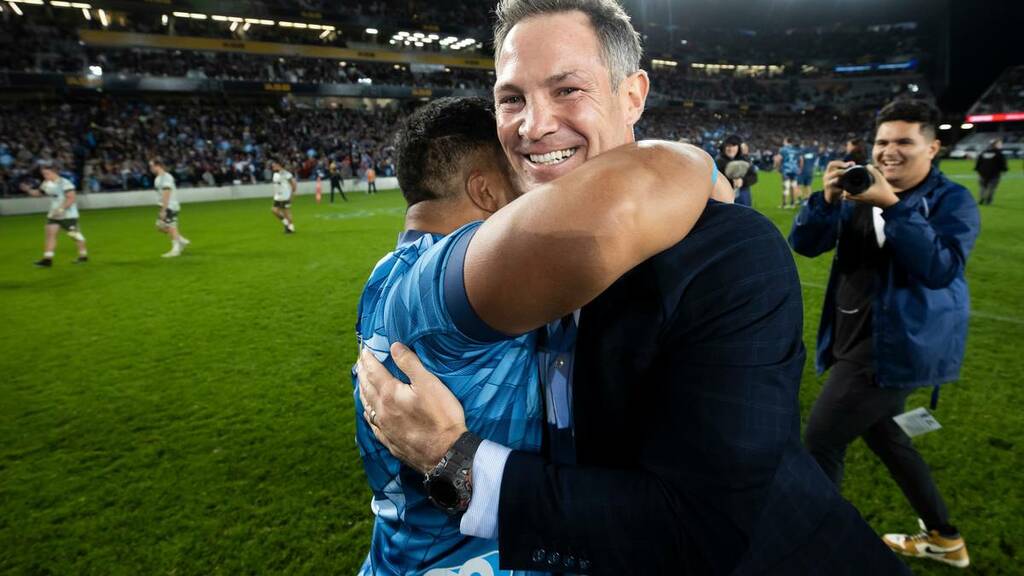 Leon MacDonald has re-signed as Blues head coach for a further two years.

MacDonald, the former All Blacks and Crusaders fullback, joined the Blues as head coach in 2019 and last year led the team to the Super Rugby Transtasman title - their first for 18 years - alongside a coaching group that includes Tom Coventry, Daniel Halangahu, Tana Umaga and Ben Afeaki.

The 43-year-old first moved into coaching after injury forced his retirement from the game, fashioning an impressive record as Tasman head coach before working under Scott Robertson as Crusades assistant coach and then heading north to the Blues.

MacDonald said he was looking forward to leading the Blues for a further two-years.

"From a rugby standpoint this club has made huge strides, but we know there is a lot more to do. We also know there is a massive talent pool here and our development as a Super Rugby club has so much potential," he said.

"We are developing strong connections within our three provincial unions with a clear focus on growing the game on and off the field for players, coaches and staff.

"I am excited by that challenge and looking forward to the opportunities ahead of us.

"Off the field my wife and family have grown to love this place. It is a fantastic city which really offers something for everyone."

MacDonald said a key reason for extending his stay at the Blues was the quality of his coaching group led by assistant coaches Coventry, Halangahu, Afeaki, and Umaga, who recently stepped down as defence coach to pursue his family business interest.

The Blues are in the process of shortlisting Umaga's replacement.

"Tana will be sorely missed for his work both on and off the field, but at the same time a new coach will bring a new dimension and hopefully challenge us on our thoughts and processes," MacDonald said.

He said the Blues also had a top-class support staff led by strength and conditioning coach Phil Healey.

Blues chief executive Andrew Hore said he and his board were thrilled that MacDonald had agreed to stay at the helm.

"Leon has guided our group who have developed into an excellent coaching team, and a superb staff not only in their individual roles, but collectively into a group who are fully supportive of our culture and heritage, our connections with our provincial unions and development pathways, and to bring pride to our region."

NZR general manager of professional rugby Chris Lendrum said: "To retain a coach of Leon's quality and experience is a great result for New Zealand Rugby and the Blues.

"He has earned the respect of his players both as a person and a coach that is borne out with the results he's achieved with Tasman at Bunnings NPC level and the Blues in Sky Super Rugby Trans-Tasman.

"I'm sure he will continue to make a positive impact to his playing group in the coming seasons and we look forward his on-going contribution in Super Rugby Pacific."